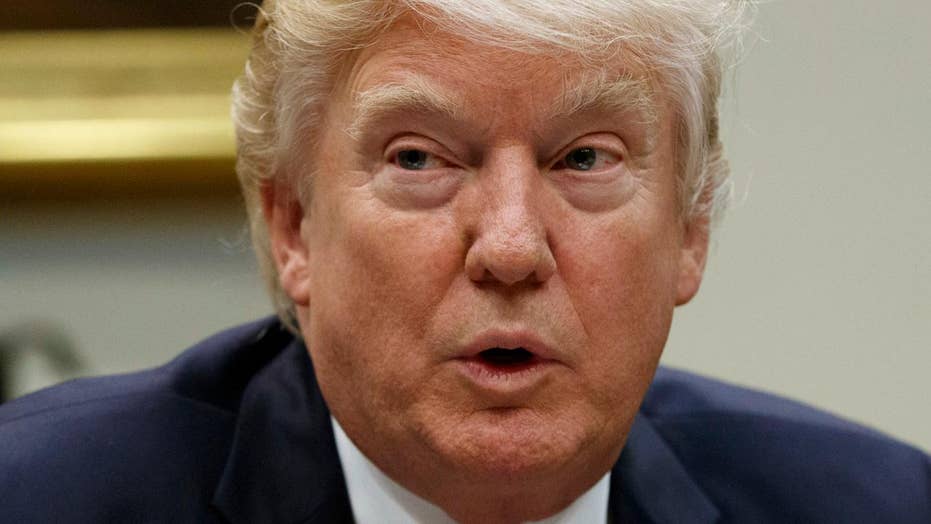 Democratic lawmakers and liberal activists plan to ring in Tax Day with nationwide protests this weekend meant to pressure President Trump to release his tax returns -- with organizers hoping for the biggest anti-Trump showing since January's Women's March.

“Whether people support him or not, [releasing his tax returns] is something that people think he should do. I think there is a chance something like this could move him,” said Lisa Gilbert, vice president of legislative affairs at Public Citizen, one of the groups organizing the marches.

The president's supporters, however, see the marches -- and the persistent tax return focus -- as a waste of time.

In Colorado Springs, Trump backers plan to hold a counter-protest on Saturday. For them, what is in Trump's tax returns pales in comparison to what could be in his tax plan.

"Their whole message is they want to see the president's tax returns. I care far more about his policy than his tax returns," Trevor Dierdorff, El Paso County Republican Party chairman, told the Colorado Springs Gazette.

Rep. Jim Renacci, R-Ohio, said during a recent House Ways and Means Committee hearing that the pressure on Trump to release his returns is a "political mission," arguing the kind of bombshells Democrats are seeking wouldn't even be in such documents.

The protests, if nothing else, could make for a rowdy scene in cities across the country, reminiscent of the Women's March on inauguration weekend.

As many as 25,000 are expected to attend the rally in Washington, D.C. Sen. Ron Wyden, D-Ore., and Reps. Maxine Waters, D-Calif., and Jamie Raskin, D-Md., will be among the speakers.

Two of the largest events are expected in Seattle, site of the World Trade Organization protests of the 1990s. In addition to the expected 25,000 marching in “Tax March Seattle,” as many as 7,000 Black Lives Matter activists plan to come out for their own rally focusing on Trump's tax returns.

There also is a protest planned in front of Trump Plaza in West Palm Beach, Fla. The protest will move to Bingham Island, directly adjacent to the Mar-a-Lago resort where Trump is staying for the weekend. According to their Facebook page, about 1,000 are expected to attend.

While organic in nature, the marches are being organized under the umbrella of several liberal activists. The partnering labor unions and activist groups range from the well-known -- MoveOn.org and Common Cause -- to more obscure players like the Endangered Species Coalition.

Gilbert contends the events could build support for an agenda beyond Trump’s taxes, such as tax fairness and economic justice.

She said Saturday’s events are focused on transparency and accountability, issues that unite Americans -- and noted that bills have been introduced in numerous states that would require presidential candidates to disclose their taxes.

“We litigated this all through the election. People didn't care. They voted for him,” she said on ABC News’ “This Week.”

The comments lit up social media and grassroots organizers began circulating plans for this weekend’s events.

According to the Facebook post by organizers of a rally in London, the goal is to be “in solidarity with the struggle of our American brothers and sisters and in protest of the xenophobia, isolationism, destruction to our planet, economy and future, and rising tides of division in Europe” and to offer “hope for a more inclusive, peaceful tomorrow.”

Voters may be split on the tax return issue. An April Bloomberg/Morning Consult poll found 53 percent of voters want Trump to release his tax returns, and 51 percent believe his returns are either very or somewhat important to them.

Whether it resonates beyond Tax Day -- which is typically April 15, though the IRS is pushing the deadline to Tuesday -- is unclear. But Democrats in Congress continue to use tax returns as a wedge issue.

House Democrats attempted to give the issue legs before leaving on recess by filing a discharge petition, intended to force a vote on the matter on the House floor.

“Only with the release of President Trump’s tax returns can we be sure the American people are the president’s top priority,” said House Democratic Caucus Chairman Joe Crowley, D-N.Y., in a statement after the petition was filed.

House Democrats also are pushing for a vote on a bill sponsored by California Democrat Anna Eshoo that would require Trump, as well as major-party nominees, to submit their previous three years of tax returns to the Office of Government Ethics or the Federal Election Commission.

But it wasn't exactly damning. The files showed Trump paid $38 million in federal income tax in 2005 on more than $150 million. The effective rate of 25 percent was higher than the rate paid by former presidential candidate Bernie Sanders.