Robert Mueller, in his only public remarks on the Russia investigation since being appointed special counsel, said his team did not have the “option” to charge President Trump with a crime while indicating he does not plan to testify before Congress.

Mueller, speaking from the Justice Department Wednesday morning, announced the closing of his office and detailed the findings of the Russia investigation, underscoring that there “was not sufficient evidence to charge a conspiracy” with regard to whether members of the Trump campaign coordinated with the Russian government during the 2016 presidential election.

“Charging the president with a crime was not an option we could consider,” Mueller explained, adding that “it would be unfair to accuse someone of a crime when there could be no court resolution of the charge.”

"The Constitution requires a process other than the criminal justice system to formally accuse the president of wrongdoing," Mueller said Wednesday, echoing his report which states that Congress "may apply obstruction laws to the President's corrupt exercise of the powers of office accords with our constitutional system of checks and balances and the principle that no person is above the law."

Minutes after he finished delivering his remarks, House Judiciary Committee Chairman Jerrold Nadler, D-N.Y., issued a statement vowing that Congress would probe allegations of obstruction against the president.

Nadler’s panel, which is already leading several Trump-focused investigations, would be the official congressional committee to lead any potential impeachment proceedings.

But Trump maintained his innocence and tweeted: "Nothing changes from the Mueller Report. There was insufficient evidence and therefore, in our Country, a person is innocent. The case is closed! thank you."

Mueller was appointed by former Deputy Attorney General Rod Rosenstein on May 17, 2017. During his remarks, Mueller outlined the scope of his nearly two-year investigation.

“I am speaking out today because our investigation is complete," Mueller said. "The attorney general has made the report on our investigation largely public. We are formally closing the special counsel's office. And as well, I'm resigning from the Department of Justice to return to private life.”

"The appointment order directed the office to investigate Russian interference in the 2016 presidential election.  This included investigating any links or coordination between the Russian government and individuals associated with the Trump campaign," he explained and added that the order also "authorized us to investigate actions that could obstruct the investigation.  We conducted that investigation and we kept the office of the Acting Attorney General apprised of the progress of our work."

Meanwhile, Mueller defended Attorney General Bill Barr and his handling of the report.

Barr has come under intense scrutiny over his handling of the report. The House Judiciary Committee, earlier this month, voted to hold him in contempt after he failed to comply with a subpoena to turn over an unredacted version of the Mueller report and its underlying documents and evidence to the committee. The president, then, asserted executive privilege in a bid to protect those files from release.

Multiple sources familiar with the situation told Fox News that Attorney General Bill Barr was aware of Mueller's plans to deliver a statement Wednesday. One source told Fox News that Barr has also been made aware of the contents of Mueller's statement. The attorney general, though, was not at the Justice Department for Mueller's appearance, and was, instead, traveling to Alaska to meet with law enforcement officials.

Mueller's appearance came amid mounting pressure for him to testify before the House Judiciary Committee in a public setting as part of that panel’s oversight investigation of the probe and the Trump administration.

Mueller, in what appeared to be an effort to tamp down demands for him to appear before congressional committees on Capitol Hill, said Wednesday that he does not plan to speak in public again.

“I hope and expect this to be the only time I will speak to you in this matter,” Mueller said. “No one has told me whether I can or should testify or speak further about this matter.”

“There has been discussion about any appearance before Congress,” he continued. “Any testimony from this office would not go beyond our report. It contains our findings and analysis, and the reasons for the decisions we made. We chose those words carefully, and the work speaks for itself.” 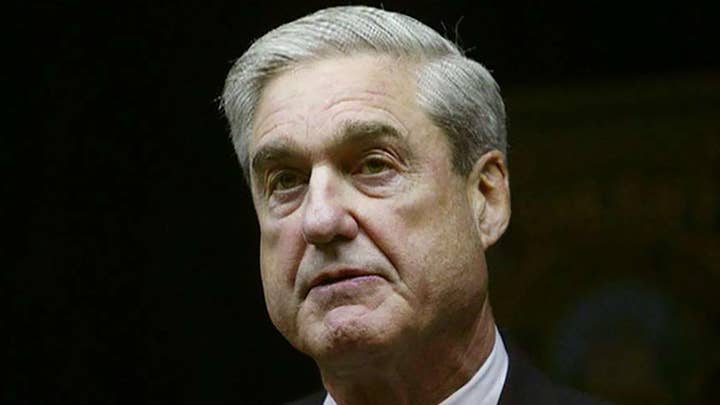 Meanwhile, the White House seized on Mueller's announcement that the probe was officially complete, maintaining that the president is innocent of any alleged wrongdoing.

“The Special Counsel has completed the investigation, closed his office, and has closed the case. Mr. Mueller explicitly said that he has nothing to add beyond the report, and therefore, does not plan to testify before Congress. The report was clear—there was no collusion, no conspiracy—and the Department of Justice confirmed there was no obstruction," Sanders said in a statement. "Special Counsel Mueller also stated that Attorney General Barr acted in good faith in his handling of the report."

Last month, Mueller’s report, with redactions covering sources and methods, and grand jury material, was released to the public and to Congress. The special counsel found no evidence of collusion between the Russians and members of the Trump campaign during the 2016 presidential election.

Mueller was also leading an inquiry into whether the president obstructed justice, outlining 10 instances that could have been perceived as obstruction. Mueller did not, however, come to a conclusion on that matter.

Attorney General Bill Barr, in March, upon reviewing Mueller’s report, said in his four-page summary that the special counsel’s investigation did not find evidence sufficient to charge the president with an obstruction of justice offense.