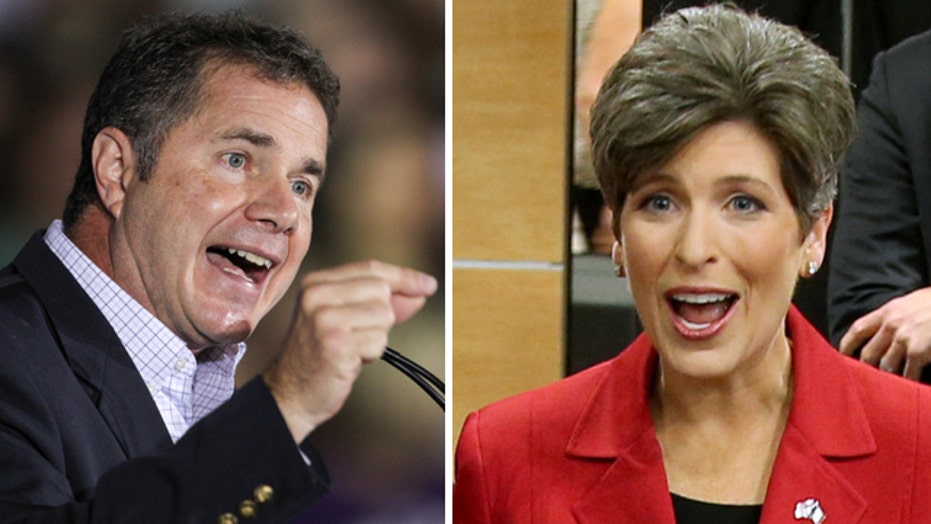 Joni Ernst is back to “hogging” Iowa airwaves, as she barrels into Election Day with another pig-themed ad, a slight edge over her Democratic rival in the polls and a significant fundraising advantage.

Whether that’s enough to carry the Republican nominee to victory in the hard-fought Iowa Senate race remains to be seen. But GOP operatives, some of whom have flocked to her campaign after she emerged from a crowded field to snag the nomination earlier this year, are touting her chances in the final days of the race.

The latest good omen for Republicans was in early voting and absentee ballots, where the party says more registered Republicans than Democrats are voting early for the first time in modern-Iowa election history.

“The Democrats can spin all they want but they are in trouble in a blue state,” Republican National Committee Chairman Reince Priebus said in a statement late Wednesday.

Democrats downplayed the news, noting that early ballot returns are in flux, and claiming a surge of Democratic ballots is expected soon.

But one thing is for certain: Iowa is a major battleground, and perhaps far more competitive than anyone thought it would be early this year.

A new Quinnipiac poll out Thursday, though, showed Ernst leading 48-46 percent. Ernst led by 6 points among crucial independents (though, despite the GOP claims about early turnout, Braley was leading among those who already voted.)

Ernst also is back up with another pig-themed ad – after the candidate drew widespread attention in the primary for running an ad in which she talked about castrating hogs.

This time, the ad shows her in a muddy, messy pig pen. “It’s a mess. Dirty, noisy, and it stinks,” she says. “Not this lot, I’m talking about the one in Washington.”

Amid the fun farm analogies, though, Braley has continued to hit Ernst on social issues like abortion and birth control coverage. In many polls, female voters break for Braley, whereas male voters are more likely to support Ernst.

David Yepsen, director of the Southern Illinois Paul Simon Public Policy Institute and former chief political reporter for the Des Moines Register, said Ernst would be wise to campaign on issues like President Obama, foreign policy, the economy, and jobs and stay away from social issues.

“She needs to stay on a soft conservative message,” said Yepsen, adding he thinks the Ernst campaign will stay fairly quiet on them for the remainder of the race. “Social issues aren’t a winning issue for Republicans as they used to be, so don’t talk about it.”

To that end, Republicans have been hitting Braley on foreign policy, especially on the Islamic State threat. Ernst, a member of the Iowa National Guard who has served in Iraq, said in a press release that Braley is “disengaged” and “he doesn’t even know what he’s voted on,” when it came to airstrikes in Syria. Ernst also called Braley “wishy-washy” on the issue of ISIS during a campaign stop. Braley’s campaign has fought back on these claims.

The Iowa Senate race is one of the crucial pick-up seats the Republican Party wants to take the majority in the Senate. Big-name politicos and donors have poured time and millions of dollars into the race.

Ernst, a state senator, is now dominating in fundraising.

The Ernst campaign reported in a press release raising $6 million in the third quarter, twice what the Braley campaign raised; Ernst’s campaign had more than $3 million cash-on-hand in the beginning of October. The release stated the Ernst campaign had set an “all-time Iowa record for the amount raised by a statewide candidate in one quarter.”

Anyone who has watched television in Iowa over the last few months knows much of those dollars are being spent on campaign attack ads.

Yepsen, though, said there’s a “law of diminishing return in terms of what’s on the air and Internet.” He said ground operations, more than ads, are turning votes at this point.

“I think most people in Iowa would actually enjoy seeing a farm chemical ad at this point,” he joked.

Even the candidates themselves are tuning out what’s being played on TV. During the third Iowa Senate debate, Braley and Ernst admitted to a surprised moderator that they and their families had stopped watching TV.

If ads aren’t registering with voters, it’s all up to the ground game to motivate people to cast their ballots early or show up on election Tuesday. While the president has been absent from Braley’s campaign trail, first lady Michelle Obama has made two stops in October to stump for him. On her initial visit, the first lady repeatedly mispronounced Braley’s last name, referring to him as Bruce “Bailey.” However, on her second appearance she poked fun at herself and made up for the mistake – though a White House transcript initially described Braley, incorrectly, as candidate for governor.

Vice President Biden also is scheduled to stump for Braley on Monday in Iowa, according to the campaign.

While Democrats typically win the game when it comes to early voting and absentee ballots, Republicans in Iowa are working to make up that difference and tout that, for now, they appear to have closed that gap.

“We have evened the plane,” Jeff Kaufmann, chairman of the Republican Party of Iowa, said recently.

Yepsen said early voting is a key component of a Democratic victory here.

“The Democrats have to pile up a huge lead among absentee ballots [to win],” he said.

A GOP memo released late Wednesday said the number of registered Republican early and absentee voting returns has surpassed those of the Democrats by 305 ballots.

Hurting the Democratic candidate perhaps the most, though, is a clip that has been played repeatedly in attack ads and is referenced in almost every speech by Ernst supports. It shows Braley caught on camera asking donors if they wanted a farmer like Iowa Sen. Chuck Grassley, or a lawyer like Braley, leading a Senate committee. That didn’t sit well in a state known for farming.

Ernst, meanwhile, has touted her farm background, telling supporters at a dinner Tuesday she was proud to be a “farm girl from a muddy dirt road,” running against a trial lawyer for the U.S. Senate.

Though the Ernst campaign has been enjoying a huge stockpile of cash on hand and a lead in the polls, Braley’s campaign is hitting Republicans on special-interest donors.

“My question for Senator Ernst is why don’t you inflict a little pain on the secret donors who are helping the Koch brothers and their billionaire friends attack me,” Braley said at a campaign rally. “They think their secret money matters more than your vote and I say that’s wrong.”

While Ernst has been pushing her image as a mother, solider, and farmer, Braley is pushing the message that he is a “bridge builder” who can work across the aisle to get things done.