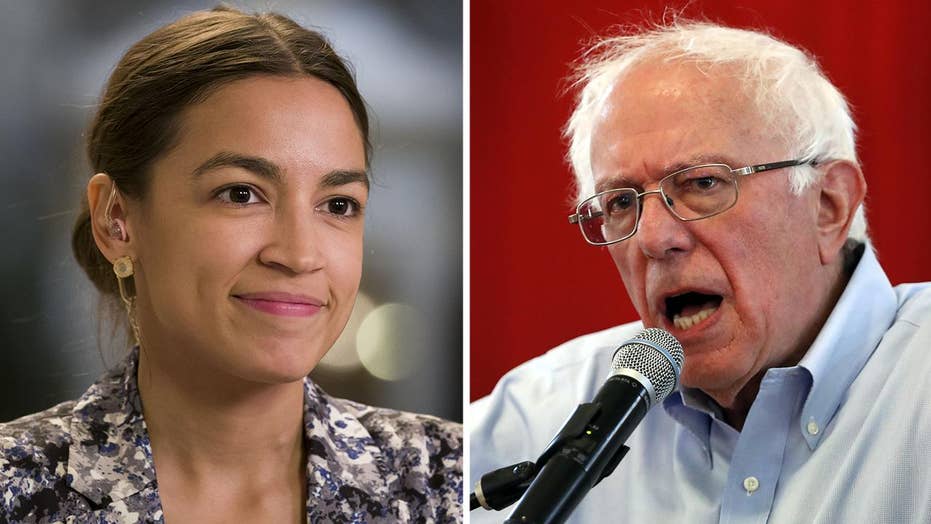 Three congressional Democrats proposed a gradually-increasing carbon tax Thursday that they claimed would meet their ambitious goal of cutting carbon emissions 100 percent by 2050.

She added, "This is a commonsense approach to cut carbon emissions by 100 percent by 2050, and I’m proud to join with Sen. Coons and Rep. Panetta to introduce it.”

The bill would rebate a majority -- 70 percent -- of revenues from the tax to low- and middle-income Americans as a monthly dividend while spending the rest on infrastructure, energy innovation, and helping communities transition to a "cleaner energy economy."

FILE - In this July 27, 2018, file photo, the Dave Johnson coal-fired power plant is silhouetted against the morning sun in Glenrock, Wyo. The Trump administration is close to completing one of the biggest of its dozens of rollbacks of environmental rules, replacing a landmark effort to wean the nation’s electrical grid off coal-fired power plants and their climate-changing smokestack emissions. (AP Photo/J. David Ake)

By 2030, the senators claim the bill would reduce carbon emissions by 55 percent from 2017 levels. "We have high-confidence projections of extreme temperatures, rising sea levels, and increased frequency and intensity of storms and droughts," an information sheet for the bill claims. "Failure to act now will result in more severe costs to our environment, economy, and security in the future."

According to Coons' office, the proposal is supported by DuPont, the Environmental Defense Fund, and other liberal organizations.

“In order to decarbonize our global energy system, the U.S. must lead in setting reduction targets that will get us to zero carbon emissions and in developing and deploying the technologies that will form the new system," Armond Cohen, the executive director of the Clean Air Task Force, said in the press release.

Conservatives pushed back hard. According to Nicolas Loris, an economist at the Heritage Foundation, the carbon tax would inflict economic damage beyond what any rebate could cover.

“One of the brightest spots in the economy over the last decade has been the country’s energy renaissance, so naturally the left wants to tax it, which means taxing the American people," Loris said in a statement to Fox News.

"No rebate check will cover economic pain this legislation would inflict," Loris added. "Are consumers going to receive a check every time they pay more at the grocery store, going out to eat, buying clothes, and everything else that will be more expensive because of higher energy costs? Unlikely."

The legislation comes amid an internal debate over how ambitious the Democratic Party should be in combatting climate change. The "Green New Deal," widely panned by conservatives, has received support from leading progressive Democratic presidential candidates.

Rep. Alexandria Ocasio-Cortez, D-N.Y., proposed the "Green New Deal" as part of a stated goal of reaching net-zero carbon emissions by 2050. It's unclear whether Ocasio-Cortez will support the senators' carbon tax, although her office previously indicated taxation alone is insufficient.

"We cannot simply tax gas and expect workers to figure out another way to get to work unless we’ve first created a better, more affordable option," her office said in a document later removed from its website.

That document said: "So we’re not ruling a carbon tax out, but a carbon tax would be a tiny part of a Green New Deal in the face of the gigantic expansion of our productive economy and would have to be preceded by first creating the solutions necessary so that workers and working class communities are not affected."

KENNEDY: WARREN TRIED TO USE APOLLO 11 TO 'BRING US TOGETHER' ON CLIMATE CHANGE, BUT DEMS LIVE FOR 'CONSTANT DIVISION'

According to an analysis by the Heritage Foundation, it is practically impossible to use a carbon tax in order to reach Ocasio-Cortez's goal of net-zero emissions by 2050. The analysis indicated that the substantial increases in the carbon tax would be economically costly and prove marginally less effective over time in reducing emissions.

Loris and Kevin Dayaratna, a senior statistician at Heritage, attempted to use the Energy Information Administration's National Energy Model to forecast the impact of steep carbon taxes aimed at reaching the net-zero greenhouse gas emissions goal. Not only did the model crash, the conservative organization said, it failed to approach anywhere near the goal outlined in the "Green New Deal." The closest Heritage was able to get was a 58 percent reduction in emissions, achieved through a $300 carbon tax. Taxes above $300 crashed the EIA's model.

Just a 58 percent reduction would, by 2040, cost the economy $15 trillion in lost gross domestic product and an average of 1.1 million jobs per year, the analysis found. It also found that the average family of four would also see a total income loss of $165,000, or nearly $8,000 each year. Household energy expenses would also see an average increase of 30 percent, the think tank said.