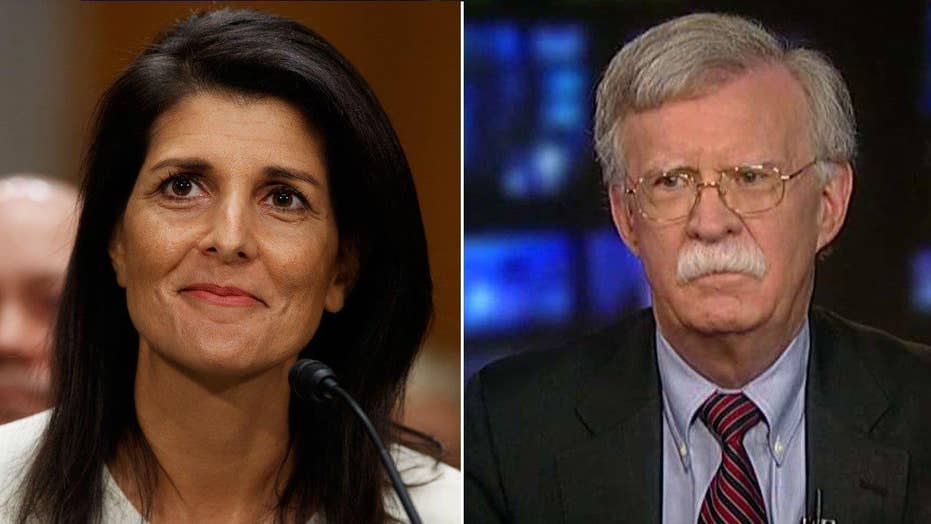 Haley: Won't shy away from threatening to pull funding from U.N.; could be great leverage

South Carolina Gov. Nikki Haley was confirmed Tuesday as U.S. ambassador to the United Nations, winning overwhelming approval first in a Senate committee, then hours later in final vote by all 100 senators.

The vote was 96-to-4, with three Democrats and Independent Sen. Bernie Sanders voting no.

During her confirmation hearing in the Senate Foreign Relations Committee, Haley declared her support for moving the U.S. Embassy in Israel from Tel Aviv to Jerusalem, a change that has the potential to trigger increased violence in the Middle East.

She also took a hard line against Russia, saying she doesn't think Moscow can be trusted right now.

The two-term Republican governor gained national prominence in 2015 when she signed a bill that finalized the removal of a Confederate flag from the South Carolina statehouse grounds, following the killing of nine black churchgoers in Charleston.

He said what the 45-year-old Haley lacks in foreign policy experience, "she makes up for in capability, intelligence, and a track record of building coalitions in South Carolina."

Haley’s parents immigrated to the United States from India, and she was the state’s first female governor.

Sen. Dianne Feinstein, the top Democrat on the Senate Judiciary Committee, forced a one-week delay for a Sessions committee vote.

The California senator asked to wait until Jan. 31, in part, she said, because the women who marched in Washington and other cities on Saturday voiced concerns about equal rights and equal pay, which are “values that the attorney general must defend.”

She also said the committee received 188 pages of new material Sunday that need to be reviewed. Committee rules allow any member of the committee to delay a vote.

Ross, Chao, Haley and Carson still face a final confirmation vote on the Senate floor. But they also are expected to win approval, considering Republicans have 52 senators and need 51 of them to vote yea.

The 79-year-old Ross has specialized in buying distressed companies that still have a potential for delivering profits. He has known Trump for more than 20 years, was an early supporter of his presidential campaign and an economic policy adviser to Trump's team.

She is also the wife of Senate Majority Leader Mitch McConnell of Kentucky, and was known to many senators before Trump tapped her for his Cabinet.

Chao said during her nomination hearing that she hopes to "unleash the potential" of private investors to boost infrastructure spending.

Carson, the former Republican presidential candidate and celebrated neurosurgeon, would lead the Department of Housing and Urban Development, a sprawling agency with 8,300 employees and a budget of about $47 billion.

Also on Tuesday, the Senate Finance Committee held its hearing on confirming Georgia Rep. Tom Price to run the Department of Health and Human Services.

As in earlier confirmation testimony this month, Price, an orthopedic surgeon, was questioned by Democrats about his investments in health care companies and his plan to repeal and replace ObamaCare.

The acquisitions, in part through a broker, occurred at about the same time Price introduced legislation to suspend Medicare rules seen as problematic for such companies.

Price again on Tuesday denied that he bought stock on a “tip” from New York GOP Rep. Chris Collins, who has boasted about making “millions” on his deal.

“Everything I did was ethical, legal, above board and transparent,” Price said.

Oregon Sen. Ron Wyden, the top Democrat on the committee, also accused Price and other Republicans in control of Congress since Trump took office of racing to repeal ObamaCare without a replacement plan for the projected 18 million Americans who could lose their health insurance.

“Congressman Price is the architect of repeal and run,” Wyden said. “The Price plan takes America back to the dark days when health care worked only for the healthy and the wealthy.”