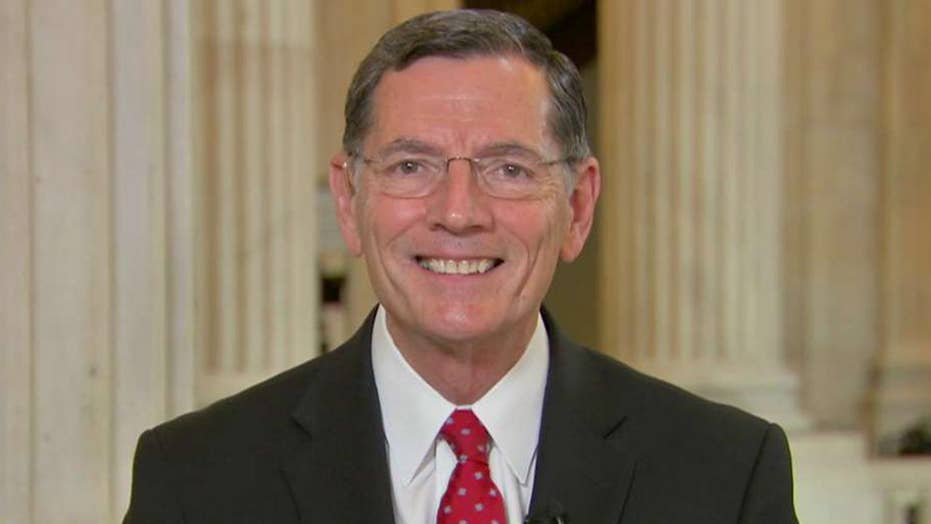 Sen. John Barrasso, R-Wyo., a member of the Senate&nbsp;Committee&nbsp;on&nbsp;Foreign Relations, expressed his support for President Trump’s handling of Iran and North Korea on Thursday, saying, “The United States continues to&nbsp;be the most powerful, respected&nbsp;nation in the world and under Donald Trump we're going to continue that way.”&nbsp;

Sen. John Barrasso, R-Wyo., a member of the Senate Committee on Foreign Relations, expressed his support for President Trump’s handling of Iran and North Korea on Thursday, saying, “The United States continues to be the most powerful, respected nation in the world and under Donald Trump we're going to continue that way.”

Barrasso made the comment on “America’s Newsroom,” one day after the Pentagon released a new video showing four nuclear-capable B-52 bombers taking off for the Middle East as part of the Trump administration's effort to deter what officials call a "credible threat" from Iran.

The White House said it dispatched the aircraft carrier USS Abraham Lincoln and the bombers to the Persian Gulf over what it described as a new threat from Iran.

“The Iran deal from the Obama administration was a bad deal. It was so bad it never even came to the U.S. Senate for approval and ratification. The president was right to withdraw and the president is right to add additional sanctions. He’s gone after oil so far and now has added steel, aluminum and other metals.”

Earlier Wednesday, Iran threatened to enrich its uranium stockpile closer to weapons-grade levels in 60 days if world powers fail to negotiate new terms for the 2015 nuclear deal. Trump pulled out of the deal a year ago, but the other nations involved -- China, France, Germany, Great Britain, and Russia -- stayed in.

“The deal was such a bad deal it did allow Iran the path to a nuclear weapon,” Barrasso said.

“I want to prevent Iran from ever getting a nuclear weapon. So whether they complied or not with a bad deal is immaterial, it didn't stop them from getting the path to the weapon.”

He added, “The president is right.”

On “America’s Newsroom," Barrasso also reacted to North Korea firing two short-range missiles on Thursday, according to South Korean military, as the U.S. responded with an intercontinental ballistic missile test of its own just 10 minutes later.

“To me it seems like the leader of North Korea is frustrated by his inability to get a deal done with President Trump,” said Barrasso.

“President Trump as you know rightly walked away from a bad deal with North Korea on his last visit, which is what President Obama should have done with Iran last time. President Trump’s not going to take a bad deal. We want to eliminate all the nuclear weapons from the Korean Peninsula. I believe the president is on the right path.”

The launch, the second such move in less than a week, occurred about 4:30 p.m. local time from the North’s Sino-ri missile base, the South’s joint chiefs of staff said in a statement. The base is located about 130 miles north of the border with South Korea. The U.S. insisted the timing of its own test was entirely coincidental.

“We have power, we have potential to use it. The president often communicates our willingness to use power, prefers not to, but we have a capacity and a commitment if necessary,” Barrasso said, adding that under President Trump, the U.S. will continue to be the most powerful and respected nation in the world.