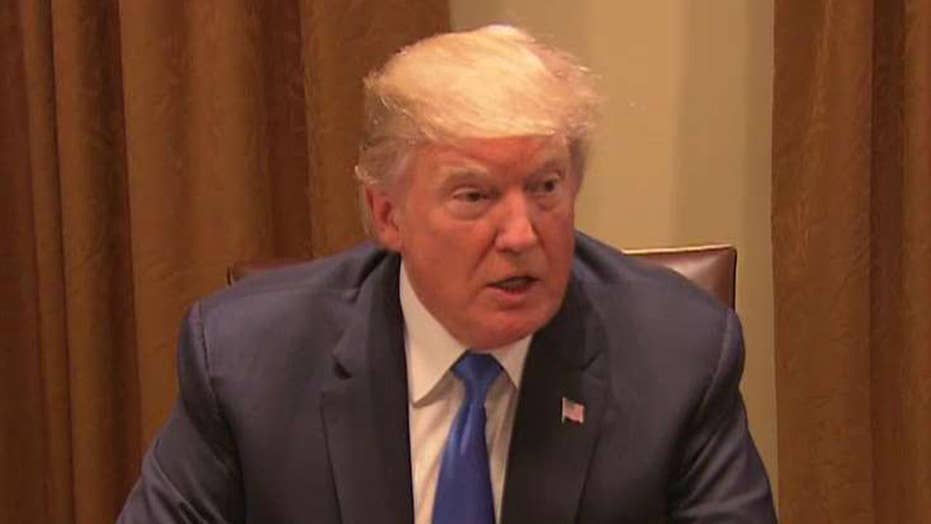 Democratic congressional leaders emerged from a meeting with President Donald Trump Wednesday vowing to pursue an agreement protecting immigrants who were brought illegally into the U.S. as children from deportation.

In a joint statement, Senate Minority Leader Chuck Schumer, D-N.Y., and House Minority Leader Nancy Pelosi, D-Calif., said they and Trump had "agreed to enshrine the protections of DACA into law quickly, and to work out a package of border security, excluding the wall, that's acceptable to both sides."

An estimated 800,000 young immigrants are currently covered by the Deferred Action for Childhood Arrivals program, or DACA, which was formed by former President Barack Obama in 2012. Earlier this month, the Trump administration announced it was winding down the program over the next six months, putting pressure on Congress to pass a legislative solution.

A source briefed on the meeting confirmed to Fox News that Trump and the leaders agreed to pair the DREAM Act, which provides for giving young illegal immigrants eventual citizenship, with some measures enhancing border security. The source said that those measures do not include Trump's long-promised wall across the U.S.-Mexico border.

However, White House Press Secretary Sarah Sanders issued a tweet denying that the border wall was off the table. A Democratic aide familiar with the conversations told Fox News that Trump "was clear he would continue to fight for the wall separate from this agreement."

Prior to Sanders' tweet, the White House issued a statement describing the meeting as "constructive" and "a positive step toward the President's strong commitment to bipartisan solutions for the issues most important to all Americans." The statement added that the three had discussed "policy and legislative priorities," including "tax reform, border security, DACA, infrastructure and trade."

During a White House meeting with moderate House members from both parties earlier Wednesday, Trump had urged lawmakers to come up with a bipartisan solution.

"We don't want to forget DACA," Trump told the members at the meeting. "We want to see if we can do something in a bipartisan fashion so that we can solve the DACA problem and other immigration problems."

The apparent deal is the latest example of Trump's sudden pivot to bipartisanship after months of railing against Democrats as "obstructionist." He has urged them to join him in overhauling the nation's tax code, among other priorities.

Trump, who was deeply disappointed by Republicans' failure to pass a health care overhaul, infuriated many in his party when he reached a three-month deal with Schumer and Pelosi to raise the debt ceiling, keep the government running and speed relief to states affected by recent hurricanes.

"More and more we're trying to work things out together," Trump explained Wednesday, calling the development a "positive thing" for both parties.

"If you look at some of the greatest legislation ever passed, it was done on a bipartisan manner. And so that's what we're going to give a shot," he said.

The "Kumbaya" moment now appears to extend to the thorny issue of immigration, which has been vexing lawmakers for years.

Funding for Trump's promised wall had been thought to be a major point of contention between Republicans and Democrats as they attempted to forge a deal.

House Speaker Paul Ryan, R-Wis., who also sat down with Pelosi to talk immigration Wednesday, told the Associated Press that deporting the so-called "Dreamers" was "not in our nation's interest," and said the president had "made the right call."

"I wanted him to give us time. I didn't want this to be rescinded on Day One and create chaos," Ryan said, arguing the time would allow Congress to "come up with the right kind of consensus and compromise to fix this problem."