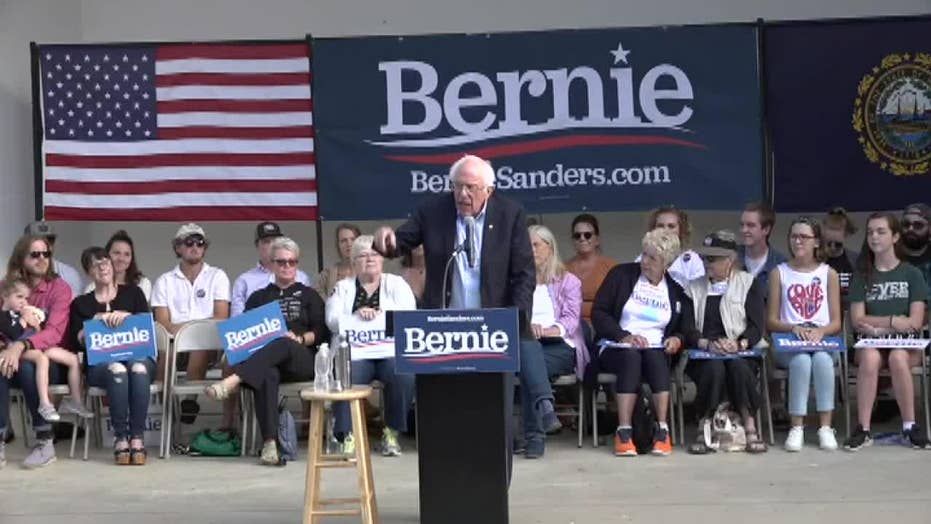 Sen. Sanders spoke on tax breaks for the wealthy at a rally in NH, saying that he will rescind those breaks once in office.

In what appeared to be a subtle dig at former Vice President Joe Biden – the front-runner in the race for the Democratic nomination – Sanders said in an interview Tuesday that “I will do everything that I can to defeat Donald Trump. And Biden is right, that’s what we’ve got to do.”

He added, "But, here is the but, I think that’s not enough.”

Sanders -- the populist independent senator from Vermont who’s making his second straight bid for the White House -- spoke with Fox News and NHTalkRadio.com during a visit to New Hampshire. He weighed in, cautiously, on Biden's candidacy after the primary front-runner made some comments that raised questions over his rationale for running.

Speaking to reporters at a campaign stop in Prole, Iowa, where the former veep was asked why he wants to be president, Biden answered: “I think it’s really, really, really important that Donald Trump not be re-elected.”

But he then added, “Could I die happily not having heard ‘Hail to the Chief’ play for me?” Answering his own question, he said, “Yeah, I could. ... That’s not why I’m running.”

And asked if he would be launching a third White House bid if a more conventional Republican was president right now, Biden said, “I’m not sure, to be quite honest with you … I hadn’t planned on running again.”

Sanders on Tuesday joked at first when asked about Biden's campaign approach.

“Joe might be listening," he said. "I don’t want to give him great advice here. He’ll take it. He’s doing well enough, you know."

But turning serious, he emphasized: “You’ve got to beat Trump, but that’s not enough. We have to transform this country and create a government and an economy that works for all of us and not just the one percent.”

Sanders is currently knotted up with fellow progressive standard-bearer Sen. Elizabeth Warren of Massachusetts for second place behind Biden in most 2020 Democratic primary polls.

But Biden, already dealing with the fallout from a series of campaign-trail gaffes, saw his comments about the presidency itself go viral, sparking headlines like "Does Joe Biden Want To Be Doing This?" in the New York Times and "Joe Biden – the anemic front-runner" in an analysis in The Washington Post.

Biden and his presidential campaign have repeatedly stressed that Trump must not be re-elected and argued that the former vice president is the best candidate among the record-setting field of Democratic White House hopefuls to beat the incumbent Republican president in next year’s general election.

Biden’s first TV commercial of his 2020 campaign – which started running on Iowa airwaves last month – declares “we have to beat Donald Trump and all the polls agree Joe Biden is the strongest Democrat to do the job. No one is more qualified.”

And Biden’s wife, Jill Biden, bluntly said on the campaign trail in New Hampshire last month that “your candidate might be better on, I don't know, health care, than Joe is, but you've got to look at who's going to win this election. And maybe you have to swallow a little bit and say, 'OK, I personally like so-and-so better,' but your bottom line has to be that we have to beat Trump.”

Sanders isn’t the first 2020 Democratic rival of Biden’s to argue this race is about more than just ousting Trump from the White House.

Sen. Cory Booker of New Jersey, speaking last month to a union crowd at a presidential candidates forum hosted by the Iowa AFL-CIO, said that “the next leader of our party can’t be someone that is a safe bet. ‘Oh let’s just find the person who can triangulate and get this done so we can beat Donald Trump.’”

BOOKER INSISTS 2020 PRESIDENTIAL NOMINEE MUST BE MORE THAN A 'SAFE BET,' IN JAB AT BIDEN

Booker then emphasized that “I’m running in this election because I know we can do more than that,” in an apparent reference to Biden.