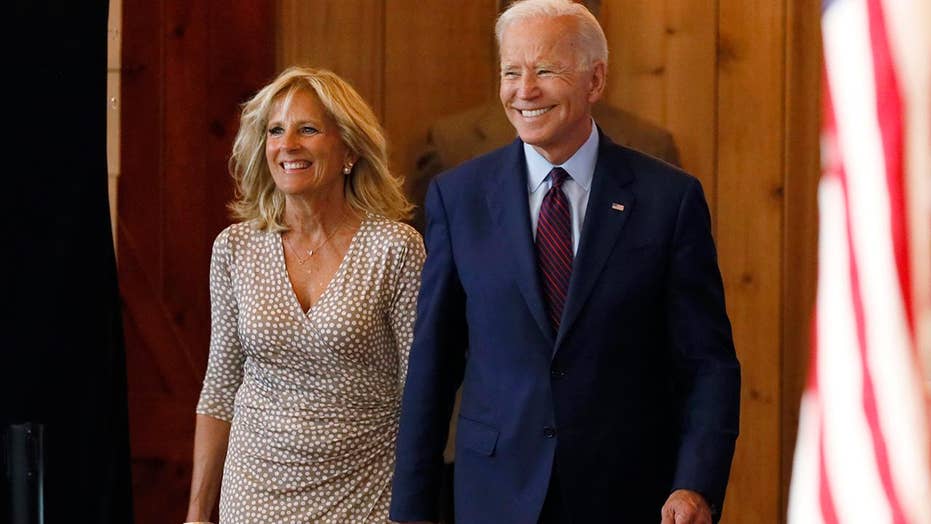 Will Jill Biden's pitch for her husband's electability inspire Democrats?

Sen. Cory Booker took an indirect swipe at Democratic presidential nomination rival Joe Biden on Wednesday, arguing that the party’s next standard-bearer must be more than a “safe bet.”

The Democrat from New Jersey, speaking to a union crowd at a presidential candidates forum hosted by the Iowa AFL-CIO, argued that “the next leader of our party can’t be someone that is a safe bet. ‘Oh let’s just find the person who can triangulate and get this done so we can beat Donald Trump.’”

Booker then emphasized that “I’m running in this election because I know we can do more than that.”

While not mentioning the former vice president by name, it was clear Booker was talking about Biden, the front-runner in the race for the Democratic presidential nomination.

BIDEN, IN IOWA, GETS TESTY WITH FOX NEWS REPORTER

Biden’s campaign touted their candidate’s standing as the Democratic White House hopeful with the best chance of beating President Trump in next year’s general election.

In Biden’s first TV commercial of his 2020 campaign – which started running on Iowa airwaves Tuesday – the announcer in the ad says “we have to beat Donald Trump and all the polls agree Joe Biden is the strongest Democrat to do the job. No one is more qualified.”

As the announcer speaks, graphics pop up on the screen showing a series of polls where Biden’s beating the Republican president in hypothetical 2020 matchups.

The ad started playing on Iowa TV a day after another obvious appeal to electability by the Biden campaign.

On Monday the candidate’s wife, Jill Biden, said at a campaign event in New Hampshire: “I want you to think about your candidate, his or her electability, and who's going to win this race.

“Your candidate might be better on, I don't know, health care, than Joe is, but you've got to look at who's going to win this election. And maybe you have to swallow a little bit and say, 'OK, I personally like so-and-so better,' but your bottom line has to be that we have to beat Trump,” she stressed.

Booker’s latest jab comes on the heels of other attacks on Biden by the New Jersey Democrat. Booker criticized Biden over his criminal justice record and his role in helping craft and pass the 1994 crime bill during the two weeks leading up to late July’s second round of Democratic presidential primary debates, as well as at the nationally televised prime time showdown.

Biden stands ahead of the rest of the record-setting field of some two-dozen Democratic White House contenders in an average of the latest national and early voting state polls. Booker is about five or six candidates back, hovering around 2 percent in the polls.