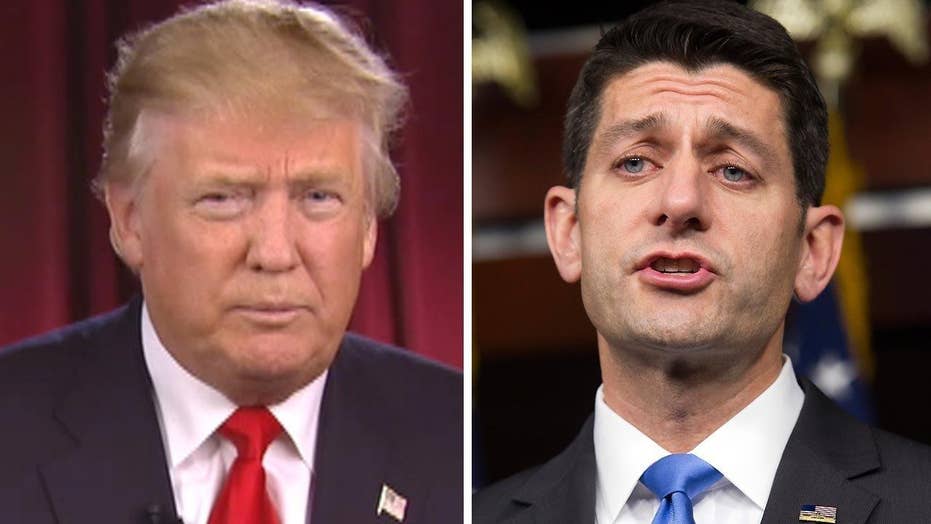 Trump: Paul Ryan is doing a good job of uniting the party

Poor Donald Trump. Nothing to do but sit at home and perhaps spin old records in hopes that House Speaker Paul Ryan, R-Wis., will come around and endorse him soon.

The duo scheduled a phone chat Wednesday evening. A source familiar with the call characterized it as a “good conversation.” That was the extent of it.

Swipe left or right, Mr. Speaker, in this game of political Bumble.

But until Ryan’s ready, it’s just Trump, biding his time – waiting for the speaker to do what everyone expects he will, and get on board. If Trump is by the turntable, perhaps the first record up should be The Kinks and “Tired of Waiting for You.”

Earlier, viral rumors suggested that Ryan was on the verge of endorsing Trump.

As dawn broke Wednesday, a senior Ryan aide told Fox News “there is no update” and there was no signal to the Trump camp to expect an endorsement.

“[The speaker has] also not told anyone he regrets anything,” said the aide.

It’s no surprise that those close to Trump leaked that Ryan was nearing an endorsement. Only Ryan was still afraid of -- you guessed it -- commitment.

During a Wednesday press conference, Ryan feigned ignorance of the leak’s catalyst.

“I don’t know where all this got from,” said Ryan. “I have not made a decision and I really have nothing more to add.”

And how does Ryan feel about that false endorsement rumor?

“I don’t worry about that stuff,” replied Ryan. “I’ve been around this a long time. None of that stuff really gets to me.”

Naturally, that begs the question whether “that stuff” would “get” to Ryan if President Trump stoked innuendos about the speaker … if he’s trying to cajole Congress to advance a particular legislative initiative next year.

Pick your version. The Supremes or Phil Collins. Either one will do.

“You can't hurry love.
No, you just have to wait.
She said love don't come easy.
It's a game of give and take.”

What’s funny is that this protracted, partially choreographed Trump/Ryan courtship is hurtling toward the only logical conclusion possible: Paul Ryan will eventually endorse Trump. It’s not so much a matter of if, but when.

Fox News is told the Ryan endorsement is coming. June is a good piece of political real estate to survey. After all, the Republican convention comes in mid-July. And if there’s much question that a Ryan endorsement isn’t a fait accompli, consider the political downside for Ryan:

As House speaker, Paul Ryan’s political bearing is certainly more complex than those of his colleagues. The party looks to Ryan for leadership. The speaker risks hanging out to dry rank-and-file Republicans if he doesn’t get behind Trump. That’s to say nothing of the personal political risk Ryan could face with such an unconventional stance of failing to endorse Trump. The House could turn on Ryan (See Boehner, John). Never mind that those who support Trump certainly aren’t in line with all of Ryan’s policy positions. They’re more aligned with Donald Trump.

Yet Ryan can’t plunge in immediately. Rip off the Band-Aid? Well, there are many Republicans in the House who can’t or simply won’t support Trump for president. So Ryan must be measured.

“I want this to be a sincere deliberative process,” said Ryan. “I think it’s important we actually discuss the principles we all share in common and the policies that come from them.”

Only the exercise may not be deliberative if it’s pointed toward an inevitable conclusion. That’s ironic considering what Ryan said earlier this month when asked about political chasms between many Republicans and Trump.

“It’s very important that we don’t fake unifying. That we don’t pretend unification. That we truly unify so we are at full strength in the fall. I don’t want us to have a fake unification process here.”

But if the Trump/Ryan alliance is a forgone conclusion, aren’t these political gymnastics fabricated anyway?

That said, Ryan took time Wednesday to paint broad brush strokes about six policy areas the GOP hopes to focus on in the coming years. The issues range from health care to executive action to poverty.

Ryan wouldn’t completely rule out a vote or two on any of these initiatives this year. But he maintains that the policy blueprints are for the future.

“This isn’t a legislative agenda for 2016 because Barack Obama is president. That’s not going anywhere,” said Ryan. “We want a conservative president. Hillary Clinton isn’t going to be for a lot of these things.”

We all know with whom Ryan is left. Donald Trump.

Shotgun wedding? Marriage of convenience? Call it what you want.

Trump will wait. Perhaps taking The Beatles’ “Come Together” for a spin.