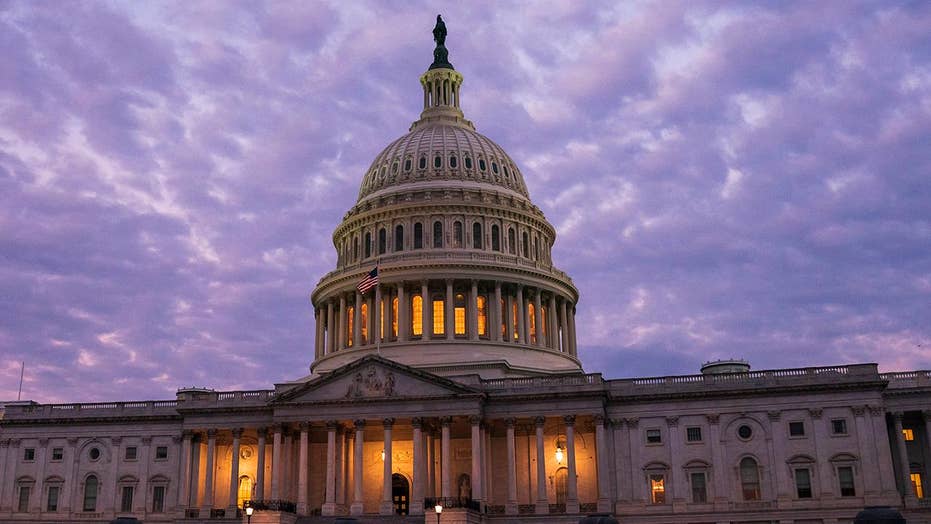 House set to vote on next phase of impeachment inquiry

Attorney Samuel Dewey says that the vote on the impeachment inquiry is recognition from Speaker Nancy Pelosi that the process so far has not followed historical fairness.

In a contentious House Rules Committee meeting that lasted into the night on Wednesday, Democrats systematically rejected GOP attempts to alter the ground rules that lawmakers will use as they consider impeaching President Trump, even as Republicans argued that the Dems' proposed procedures were fundamentally unfair.

Several moderate Democrats in swing districts, meanwhile, signaled that they were concerned about the impeachment procedures, ahead of a vote on the rules Thursday morning by the full House floor. Minnesota Rep. Collin Peterson, one of five Democrats who hasn't committed to supporting the party's resolution on impeachment procedures, told Fox News Wednesday evening, "I’ll figure it out."

Rep. Rob Woodall, R-Ga., a member of the House Rules Committee, argues a point during a markup of the resolution that will formalize the next steps in the impeachment inquiry of President Trump. (AP Photo/J. Scott Applewhite)

Throughout the hourslong meeting, Republicans voiced frustration as they repeatedly introduced and advocated for amendments to the rules. Democrats quickly shot those proposals down as disagreements proceeded along party lines.

WHAT'S IN DEMS' RESOLUTION -- AND WHY WON'T THEY CALL IT AN 'IMPEACHMENT RESOLUTION'?

"Time and time again, in a nickel-and-diming kind of way, you continue to build into the process, for the first time in American history, advantages to the majority," Woodall remarked.

Hastings' admonition to Woodall came as the Republican demanded to know why Democrats killed an amendment from Rules Committee Ranking Member Rep. Tom Cole, R-Okla., which would have held Democrats and Republicans to the same standard in how to call witnesses.

Under Democrats' current rules, the GOP argued, only minority Republicans are forced to submit a detailed written explanation for why a witness should be subpoenaed to appear before the committee.

House Rules Committee Chairman Jim McGovern, D-Mass., left, joined by Rep. Alcee Hastings, D-Fla., presides over a markup of the resolution that will formalize the next steps in the impeachment inquiry of President Donald Trump, at the Capitol in Washington, Wednesday, Oct. 30, 2019. Democrats have been investigating Trump's withholding of military aid to Ukraine as he pushed the country's new president to investigate Democrats and the family of rival presidential contender Joe Biden. (AP Photo/J. Scott Applewhite)

"To have these amendments being dismissed as somehow inappropriate -- we don't ever do this," Woodall said, his voice rising. "What purpose does this achieve? But no one can explain it to me, a sitting member of this committee?"

Cole added that his amendment was a matter of "simple fairness," and an effort to correct a flagrant "double standard."

McGovern, the chair, interjected that the standards were the same as those under the Nixon and Clinton impeachments. But, Cole responded that McGovern's statements were "factually inaccurate," and that if the Rules Committee had fact-finding hearings, instead of a meeting, then he could better make his case on that point.

"I'm willing to bet that there's no process that would be respectable on the Republican side."

"If the gentleman would hear me out, I suspect we'd find agreement," Cole said, as McGovern began to interrupt. "Let me stipulate that I am absolutely asking for something that was not given to Democrats in the Clinton inquiry. I was here during the Clinton inquiry I'm absolutely asking for something that was not granted to the minority in that time. But I'm asking for it anyway because I think it's important."

Cole went on to argue that the Democrats' new process was meaningfully different. "During [the Clinton inquiry,] whether it was the chair or the ranking member, if one of those disagreed with issuing a subpoena, then the entire committee voted on whether or not to move forward. That is not the rule you have created here.

Cole also said that it was "unprecedented" that Democrats were denying Republicans the right to grant their time to other members, and for Democrats to draw up the impeachment procedures resolution with no GOP input.

House Rules Committee Chairman Jim McGovern, D-Mass., presides over a markup of the resolution that will formalize the next steps in the impeachment inquiry of President Donald Trump, at the Capitol in Washington, Wednesday, Oct. 30, 2019. Democrats have been investigating Trump's withholding of military aid to Ukraine as he pushed the country's new president to investigate Democrats and the family of rival presidential contender Joe Biden. (AP Photo/J. Scott Applewhite)

McGovern shot back that previous Republican Congresses had adopted those rules, and that "maybe" Cole should ask "your past leaders why they did that."

"Can I just say, with all due respect, I'm willing to bet that there's no process that would be respectable on the Republican side," McGovern said later.

Maryland Democratic Rep. Jamie Raskin also argued that Republicans would abuse their subpoena power to probe "deep-state conspiracy theories that have been debunked" -- prompting Arizona GOP Rep. Debbie Lesko to note that Democrats have insisted, contrary to available evidence and Special Counsel Robert Mueller's findings, that the Trump campaign conspired with Russians to influence the 2016 election.

Republicans were especially stunned when McGovern complained that the meeting was the "first time [Democrats] were seeing" Republican proposals for amendments to the impeachment rules, including what he called "gotcha" amendments that he said were "poorly written." Democrats provided the text of their impeachment resolution on Tuesday.

"No," Cole responded quickly. "I mean, to say this is the first time you're seeing the amendment? It's 24 hours after we got the product, you're the ones that decided not to have a hearing, you're the ones who decided to do this all by yourself with not even a suggestion -- so please don't complain about the amendments. We weren't given any chance to have any input in the document."

Rep. Rob Woodall, R-Ga., joined at left by Rep. Michael Burgess, R-Texas, objects to the resolution put forth by House Rules Committee Chairman Jim McGovern, D-Mass., at a markup that will formalize the next steps in the impeachment inquiry of President Donald Trump, in his office at the Capitol in Washington, Wednesday, Oct. 30, 2019. Democrats have been investigating Trump's withholding of military aid to Ukraine as he pushed the country's new president to investigate Democrats and the family of rival presidential contender Joe Biden. (AP Photo/J. Scott Applewhite)

Added Lesko; "I hope you know when you call things 'poorly written amendments,' that you do realize these are attorneys writing these amendments on staff. So you're not ridiculing me, you're ridiculing the staff."

McGovern later apologized for his comments, saying he was "tired" and adding, "I love the staff."

A separate amendment from Lesko to require the publication of deposition transcripts, rather than to merely "authorize" them, was also voted down.

There was no doubt that the Democratic-controlled chamber would approve the eight pages of rules on Thursday. But it was unclear exactly how many defectors each party would suffer, and how long the vote would take.

The House meets at 9 a.m. ET on Thursday, and debate on the impeachment rules resolution is expected to take one hour.

House Minority Leader Kevin McCarthy told reporters that the package creates "much more of a politically closed system than an open system."

That echoed Republican complaints that the Democratic-run process has been secretive and tilted against them. The investigation is focused on Trump's efforts to push Ukraine to investigate his Democratic political opponents by withholding military aid and an Oval Office meeting craved by the country's new president.

Both parties' leaders have been rounding up votes as Thursday's roll call approaches, with each side eager to come as close to unanimity as possible.

Republicans said a solid GOP "no" vote would signal to the Senate that the Democratic push is a partisan crusade against a president they have never liked. McCarthy, R-Calif., said he's unaware of any Republican even "leaning toward voting for it."

If the House impeaches Trump, the Senate will decide whether to remove him from office.

Rep. Fred Upton, R-Mich., a moderate who some thought might be open to backing the Democratic rules, said he would oppose them. He complained about the secrecy that Democrats have used and said he would not be pressured by GOP leaders or Trump, with whom he had a drink at a Republican fundraiser on Tuesday night.

"You really can't roll back the clock" from the time the investigation began last month, Upton said.

Democrats were also hoping to stay united to demonstrate solidarity from their most left-wing elements to their most moderate members.

"We all want to just follow the facts, apply the law, be guided by the Constitution, present the truth to the American people, and a vote tomorrow is a step in that direction," said Rep. Hakeem Jeffries, D-N.Y., a member of the Democratic leadership.

He said he believed "the overwhelming majority" of Democrats would back the measure.

House Speaker Nancy Pelosi, D-Calif., decided to have the vote following weeks of GOP claims that the inquiry was invalid because the chamber has not voted to formally commence the work.

The rules lay out the process by which the House Intelligence Committee — now leading the investigation by deposing diplomats and other officials behind closed doors — would transition to public hearings.

That panel would issue a report and release transcripts of the closed-door interviews with parties connected to Trump's interactions with Ukraine.

The Judiciary Committee would then decide whether to recommend that the House impeach — that's a finding that he should be removed from office.

Republicans could only issue subpoenas for witnesses to appear if the entire panel approved them — in effect giving Democrats veto power over such requests by the GOP. 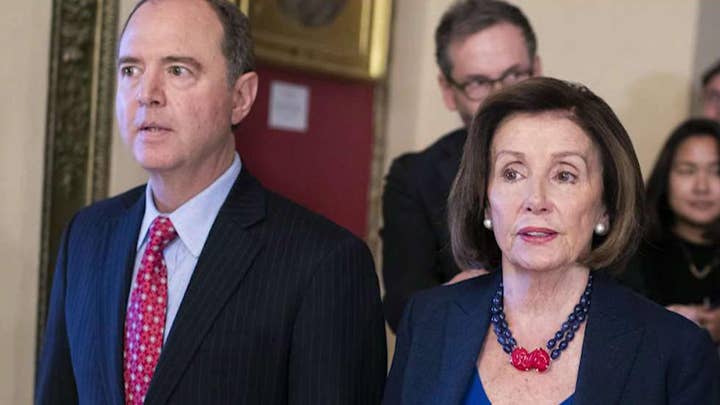 Attorneys for Trump could participate in the Judiciary Committee proceedings. But in a bid for leverage, Chairman Jerrold Nadler, D-N.Y., would be allowed to deny "specific requests" by Trump representatives if the White House continues refusing to provide documents or witnesses sought by Democratic investigators.

The rules also direct House committees "to continue their ongoing investigations" of Trump.

Top Democrats think that language will shield their members from weeks of Republican complaints that the inquiry has been invalid because the House had not formally voted to begin that work.

Republicans have said the House took such votes before the impeachments of Presidents Richard Nixon and Bill Clinton. Democrats have said there is no constitutional provision or House rule requiring such a vote.

McConnell said the resolution would deny the "most basic rights of due process" to Trump such as having his lawyer participate in closed-door depositions by the committee.

Democrats compare the committee's role in the investigation to a fact-finding grand jury proceeding in which the accused does not have rights to counsel.