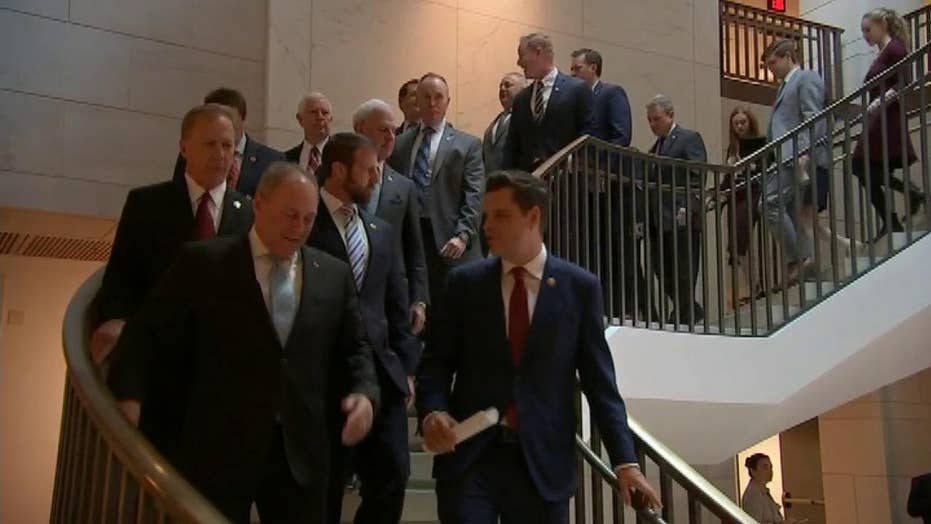 House Democrats' impeachment inquiry resumed Wednesday afternoon, after around two dozen Republicans brought proceedings to a screeching halt earlier in the day by storming into a closed-door deposition with a senior Defense Department official.

The deposition with Laura Cooper, who has overseen Ukraine policy, was underway again, Fox News has learned. Additionally, Fox News is told the Defense Department tried to block Cooper from appearing for the deposition at all, but that Cooper ultimately decided to comply with a subpoena from the House Intelligence Committee.

Republicans said they took the dramatic step to storm the deposition because Democrats' impeachment inquiry hasn't been transparent, even as Democrats selectively leak some testimony and evidence to the press. The inquiry is being led by three committees made up of both Democrats and Republicans, but members of Congress not on those committees do not have access to any of the sensitive documents or interviews relating to the probe. Republicans also do not have co-equal power to subpoena witnesses or pursue evidence in the probe.

House Republican Whip Steve Scalise, R-La., claimed that House Intelligence Committee Chairman Adam Schiff then "fled with the testifying witness" when roughly 50 Republicans, including several not on one of those three committees, went "face-to-face and demand access to ongoing impeachment proceedings."

Some Republicans asked to be arrested by Capitol police officers, Fox News has learned, hoping that it would help them make their case that Democrats are abusing the impeachment process.

But, Democrats said the Republicans' move compromised national security as some of them brought electronic devices into the Sensitive Compartmented Information Facility, or SCIF. Rep. Alex Mooney, R-W.Va., even posted on Twitter what he called an audio "report from inside the SCIF."

At the end of his recording, however, Mooney claimed he was on a "secure phone," and did indeed give up his cellphone as required.

Meanwhile, North Carolina Rep. Mark Walker tweeted: "UPDATE: We are in the SCIF and every GOP Member is quietly listening."

And Georgia Rep. Buddy Carter wrote that "my Republican colleagues and I just stormed the impeachment hearing room and finally got in."

Asked by Fox News whether Republicans were being confrontational, House Minority Leader Kevin McCarthy replied: "How is it confrontational for a member to walk into a committee to ask for information about something they will be asked to vote on?"

Several lawmakers leaving the facility confirmed that multiple Republicans had brought their cellphones, even though electronics were not allowed.

Fox News is told some Republican members removed their devices after being advised about the rules for the secure area by the House Sergeant at Arms.

Members of Congress have been familiar with the protocol of the SCIF, since classified briefings are common, and there are several such rooms around the Capitol.

Multiple House and Senate Committees have SCIFs for classified briefings, interviews, and hearings.

Rep. Bennie G. Thompson, D-Miss., who chairs the Homeland Security Committee, wrote to the House Sergeant at Arms late Wednesday to demand "action with respect to the Members involved in the breach," and to urge "House-wide action to remind all Members about the dangers of such reckless action and the potential national security risks of such behavior."

“This stunt from House Republicans is designed to intimidate people from revealing the truth – hardly the hallmark of a democracy. It's outrageous - but not surprising – behavior," Senate Minority Leader Chuck Schumer, D-N.Y., said in a statement.

Lawmakers described a chaotic scene. Rep. Debbie Wasserman Schultz, D-Fla., said she had just walked into the room when the Republican lawmakers blew past Capitol Police officers and staffers for the Democrats.

The staff member who was checking identification at the entrance was "basically overcome" by the Republicans, she said.

"Literally, some of them were just screaming about the president and what we're doing to him and that we have nothing and just all things that were supportive of the president," Wasserman Schultz said.

GOP South Carolina Sen. Lindsey Graham criticized his Republican colleagues for the tactic, initially calling them "nuts" to make a "run on the SCIF."

Later in the day, though, Graham issued what he called a "correction."

"I was initially told House GOP took the SCIF by force – basically like a GOP version of Occupy Wall Street," Graham wrote on Twitter. "Apparently it was a peaceful protest. Big difference. I understand their frustration and they have good reason to be upset."

The standoff unfolded Wednesday morning after lawmakers held a news conference in which they accused House Democrats of lack of transparency.

The Republicans specifically decried that the deposition was happening behind closed doors and said Americans should be able to read the transcripts of any interviews being conducted as part of impeachment. Democrats have promised to release the transcripts when it won't affect their investigation.

The developments came the day after a top U.S. diplomat testified that he was told Trump withheld military aid to Ukraine until the country's president went public with a promise to investigate Democrats.

The White House, however, slammed the testimony from former U.S. Ambassador William Taylor as part of the House impeachment inquiry "triple hearsay" and insisted that the president "has done nothing wrong."

"The members have just had it and they want to be able to see and represent their constituents and find out what's going on," Ohio Rep. Jim Jordan, the top Republican on the House Oversight and Reform Committee, told reporters.

That committee has been one of three leading the investigation, and its members have been allowed into the closed-door hearings.

“We’re going to try and go in there, and we’re going to try to figure out what’s going on, on behalf of the millions of Americans that we represent that want to see this Congress working for them and not obsess with attacking a president who we believe has not done anything to deserve impeachment,” said Rep. Matt Gaetz, R-Fla., who led Republicans in their protest.