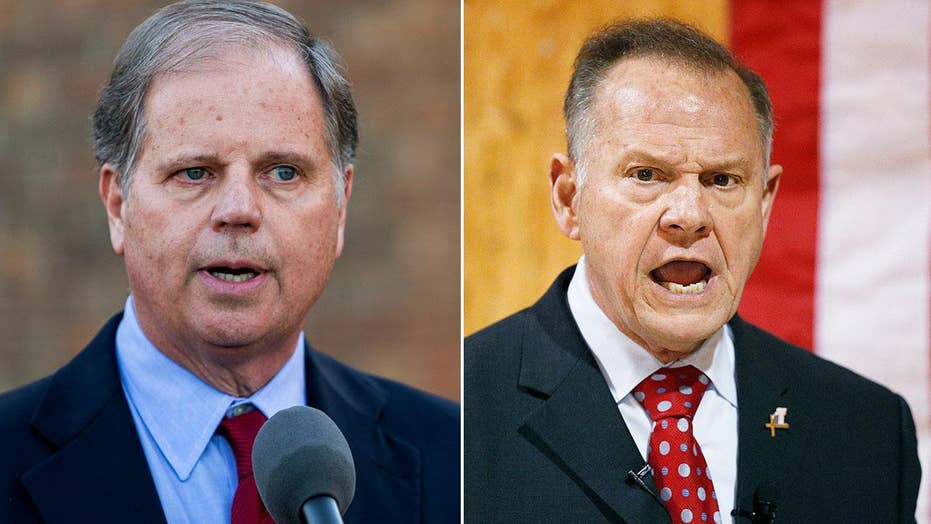 Democrat Jones spoke first during a "Get-Out-the-Vote Rally" in Birmingham. Jones, who led Moore by 10 points in a recent Fox News poll, said that now is the time to make a choice. “It’s now time,” Jones said to a cheering crowd. “The hay’s in the barn. All we got to do is get our votes tomorrow. Take people with you to the polls. This election is going to be one of the most significant in our state’s history in a long time.”

Moore spoke later in the night at a "Drain the Swamp" rally in Midland City. He was bolstered by support from a wide array of local figures and prominent conservatives including former White House chief strategist and Breitbart chairman Steve Bannon and, earlier in the evening, by Sheriff David Clarke.

Jones and Moore are vying for the seat vacated by Jeff Sessions' move to become Attorney General earlier this year.

Flanked by his family on one side and actress Alyssa Milano and basketball legend Charles Barkley on the other, Jones remained hopeful and generally steered away from the series of sexual misconduct allegations that have swirled around Moore.

“I have heard so much, especially in the last couple of weeks,” he said. “It is time, and I think we are going to see it tomorrow, that the majority of Alabama people put our decency, our state, before a political party. I think it’s time to say no more to treating people like second class citizens. It’s just time, folks, that we say no more.

“This race is really not about Roy Moore. It’s not about Doug Jones. This election is what we are as a people in the state of Alabama,” Jones continued. “We are on the right side of history, folks. Please help us get across the finish line. Get your folks to the polls. We’re going to do this. Thank you all.”

Prior to Moore taking the microphone his wife, Kayla, addressed a series of accusations against the Senate candidate, including those that said Moore was anti-Jewish and anti-Black. The narrative, Kayla argued, was an inaccurate one perpetrated by the media.

“One of our attorneys is a Jew,” she said. “Fake news! They are the ones who are embarrassing and they should be ashamed for getting involved in this election for our opponent.”

When Moore finally reached the podium, he was largely subdued, discussing what he alleged was the country’s lost focus on God and the subsequent repercussions.

“We started to forget God and where our strength came from,” Moore said. “We have forgotten that faith upon which we are founded. My opposition has always been about my acknowledgment of God.”

Speaking about the sexual misconduct allegations against him, Moore admitted that the race “has been strange.”

“This race has been very odd,” Moore continued. “We’ve had two presidents, and one candidate for president, who didn’t make it, thank God, do robocalls in this state. We talk about draining the swamp…it’s difficult to drain the swamp when you’re up to your neck in alligators. And that’s where we are, up to our neck in alligators.”

He labeled the initial Washington Post piece detailing the allegations against him a “terrible, disgusting article,” questioning why “these women had not come forward for 40 years but they came forward 30 days before the election.”

Emphasizing “duty, honor and country” to cheers of “Moore, Moore, Moore,” the candidate thanked his supporters ahead of Election Day.

“All this mess is going to be over tomorrow,” he said. “The verdict rests on the people of Alabama.”