Trump to tout agenda at rally aimed at Alabama voters

MONTGOMERY, Ala. – Donald Trump won’t be in Alabama on Friday, but Roy Moore is happy he'll be just miles away.

“We’re looking forward to President Trump being on the Gulf Coast tomorrow,” Ben DuPre, a Moore adviser, said at a campaign event here in the state’s capital, Montgomery, on Thursday.

Just days before voters go to the polls, Trump is set to headline his own campaign-style rally on Friday evening just 25 miles away from the Alabama state line,  in Pensacola, Florida.

Moore’s campaign says the candidate is not scheduled to attend Trump’s Florida event. But campaign staffers are hopeful that Trump’s visit could still give them a boost as their candidate tries to claw his way to victory in the state’s Senate election next week.

Pensacola shares a media market with Mobile, Alabama, and is an easy car drive for Trump-supporting Alabamians – the type of voters the scandal-plagued Moore needs to energize if he hopes to defeat Democrat Doug Jones in the tight race.

"The balance of power in the Senate is very narrow."

Trump’s visit comes just days after the president officially endorsed Moore, saying he needs another Republican vote in the Senate. That’s the argument Moore’s supporters are making to undecideds.

“The balance of power in the Senate is very narrow,” Shanna Chamblee, a gun rights activist who is supporting Moore, said Thursday. “President Trump needs Roy Moore’s support if the opportunity becomes available to appoint another Supreme Court justice.”

For the last several weeks, Moore has resisted calls from top Republicans, including Senate Majority Leader Mitch McConnell, to drop out of the race after numerous women came forward to say Moore pursued them romantically when he was in his 30 and they were teenagers.

Even Alabama’s senior Republican senator, Richard Shelby, has said he wrote-in another candidate's name rather than support Moore.

But after taking a hit in the polls, Moore has recovered in recent days. The Real Clear Politics polling average shows Moore with 48 percent to Jones’ 45.7 percent.

This isn’t the first time an Alabama Republican Senate candidate has hoped a Trump rally could make a critical difference. In September, the president traveled to Huntsville to campaign for incumbent-appointed Sen. Luther Strange, who went on to lose to Moore in a runoff. 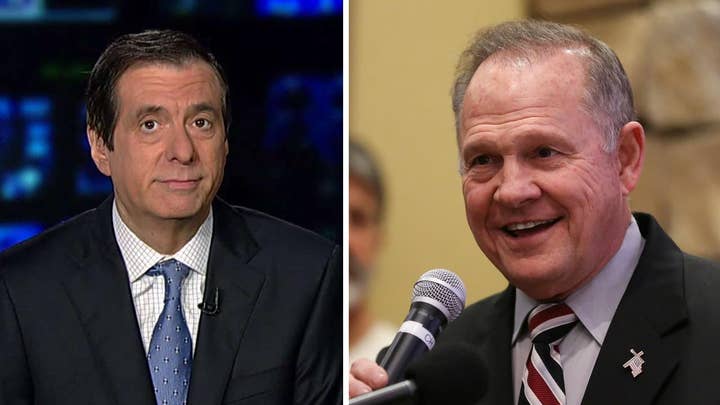 Jones, who has not shied away from liberal positions on abortion, is now emphasizing political stances that could appeal to Republicans who won’t vote for Moore.

“I’m a person of faith and I try to live my faith every day,” Jones said in a radio ad heard in the state on Thursday.

In the same ad, the Democrat went on to say he’s a gun owner, supports lower taxes, is against deficits and backs a strong military.

At the same time, even as Moore's allies say they believe he has survived the scandal, his campaign is still fighting back against the allegations.

Top surrogates for the Republican held a press conference Thursday morning near Alabama’s state capitol building to denounce a pro-Jones super PAC that has been aggressively running ads against Moore.

“This week, the Judge Moore campaign sent cease-and-desist letters to media around the state requesting they stop running Highway 31’s shopping mall ad, which rehashes debunked myths about Judge Moore and the Gadsden Mall, from which he was never banned,” said DuPre, a former chief of staff to Moore.

After the allegations surfaced, The New Yorker interviewed people who said that Moore had once been banned from the mall. The claim spread across the internet, but Moore denied it and no hard evidence has surfaced to corroborate the story.