Florida Gov. Ron DeSantis said Monday that CBS's long-running newsmagazine "60 Minutes" discredited itself by pushing a "political narrative" about his handling of the coronavirus vaccine rollout that ran counter to the reality.

DeSantis said on "Tucker Carlson Tonight" that during a segment with correspondent Sharyn Alfonsi, his words were "deceptively edited" to portray his state's senior citizen vaccination plan with Publix supermarkets to be nothing more than paying back a corporate political donor.

Host Tucker Carlson also played Alfonsi's clip followed by the full video of DeSantis' exchange during a press conference that the CBS program took from.

DeSantis said his deal with Publix had nothing to do with a six-figure political donation, and that several Florida Democrats came out in his defense and confirmed his account of the agreement. 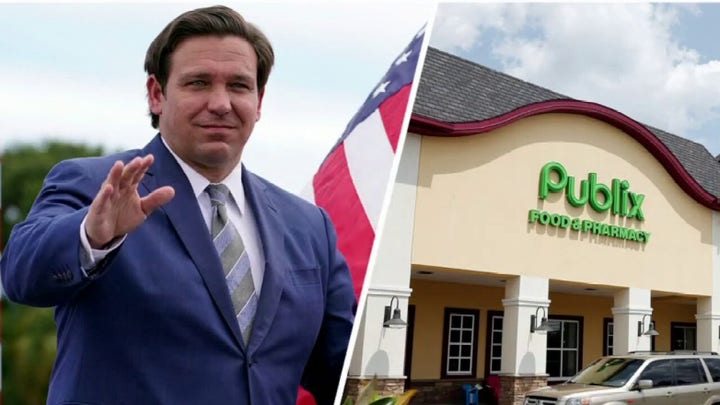 He told Carlson that in Palm Beach County, which was the focal point of the controversy, leaders in the heavily-Democratic precinct calculated that 90% of its senior citizen population lived within 1.5 miles of a Publix.

While the eastern half of the county is along the dense I-95 corridor and has several Publix locations, the western end is sparse and agrarian.

DeSantis said "60 Minutes" left out that important context, in that because of the lack of preexisting options, his government set up a separate and unique vaccination site in the village of Pahokee, about 30 miles east of Clewiston -- unaffiliated with Publix.

"[What's] lost in this is that we vaccinated now 3.5 million senior citizens. We’re the first state to say we’re doing seniors first. We’re not going to follow the CDC’s recommendation. What we have done has worked," he said.

"They didn’t want to discuss that. Obviously they selectively edited the background. They tried to act like there was a conspiracy with Publix."

"They ignored the fact that I met with the county mayor who is a Democrat that said who "60 minutes" has done is bunk." DeSantis added that the head of the state's version of FEMA is also a Democrat, and also came to his defense on the matter.

He accused CBS of not speaking with key Palm Beach County officials, who, though Democrats, would "blow up their narrative" -- naming specifically County Mayor Dave Kerner.

Host Tucker Carlson surmised that it was only a matter of time before the Democrats and the media put a focus on DeSantis to try to undermine him -- pointing to the pandemic-era exodus from purportedly badly-run states like California, Michigan and New York -- while Florida has instead enjoyed an influx of new residents.

"I didn’t watch the show because it’s sad to see something like "60 minutes" degraded," the host added.