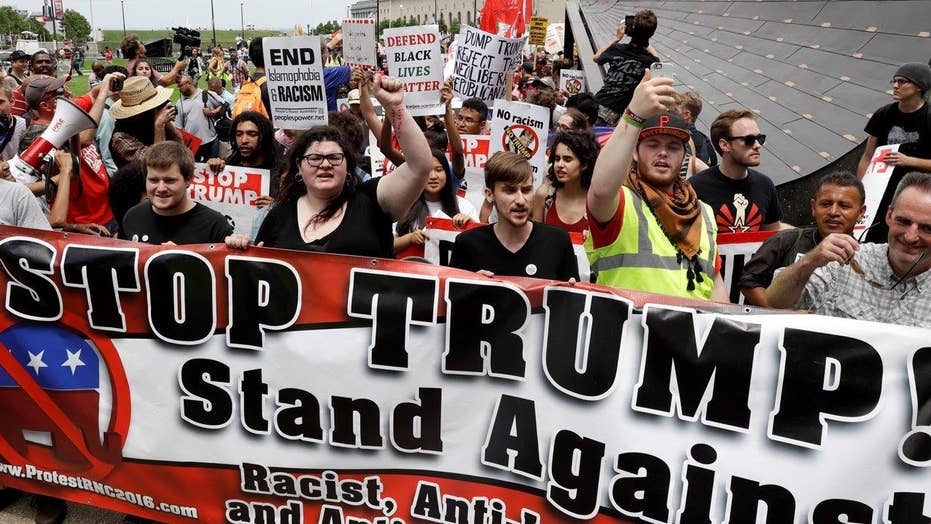 Demonstrators take to the streets to protest Republican National Convention

The Republican convention appears to be facing a rocky opening both inside and outside the arena – inside, from forces loyal to Ted Cruz mulling a procedural fight and outside, from anti-Trump protesters testing the demonstration rules set by the city.

Party Chairman Reince Priebus formally kicked off the convention Monday afternoon, setting in motion a packed day of speeches and official party business including the platform itself.

But on the sidelines, multiple high-level GOP sources in Cleveland told Fox News that officials loyal to Cruz – led by former Virginia Attorney General Ken Cuccinelli and Sen. Mike Lee of Utah – have been bargaining with the Republican National Committee and Donald Trump campaign over procedural changes they failed to secure in last week’s Rules Committee sessions.

Coming as some anti-Trump delegates still are trying to mount a rebellion on the floor, the Cruz camp is seeking its own changes.

Those forces want to revise the rules that will reward states with closed primaries -- and for the RNC and Trump camp to allow Cruz’s name to be placed in nomination from the convention floor.

For the latter to occur requires certain numbers of delegates from eight states, written signatures and more – and the Trump campaign can move to frustrate that effort if they wish.

From their end, the Cruz forces have the power to somewhat disrupt the convention over the first two days – albeit with little power to affect the ultimate outcome of Trump receiving the nomination. One threat the Cruz forces are said to be holding over the heads of the RNC and the Trump campaign is the specter of a large group of delegates – in the hundreds – simply leaving town after Cruz speaks on Wednesday night, exposing the nominee to the prospect of televised images of empty seats in the Quicken Loans Arena. It’s an open question whether there are enough alternate delegates who can be rallied to fill such a number of seats.

On the Trump side, Republican consultant and Trump adviser Roger Stone is said to have mobilized a group of 1,000 people to push back wherever his candidate’s interests are being threatened.

RNC Chairman Priebus was huddling with key advisers on these issues Sunday night, to a degree unusual for a sitting chairman on the eve of the gaveling of his party’s convention; on such evenings, the chairman is usually performing more ceremonial duties.

These sources tell Fox News that the bargaining is reaching its end. The deal most likely to materialize would see Cruz rewarded with his name being placed in nomination, and revisions to the rules that reward closed-primary states with more delegates, in exchange for Cruz instructing his delegates to allow the convention to proceed smoothly and perhaps signing some kind of unity pledge.

A Republican source tells Fox News that the key sticking point is Cruz's speaking slot and specifically the content of his speech. The original agreement between team Trump and team Cruz allowed Cruz to speak without offering a formal endorsement of Trump. So far, Trump's folks have not asked to look at the speech.

Meanwhile, protests are getting underway. While demonstrations have been held for days in Cleveland, Monday’s have the potential to get rowdy.

One group, the Coalition to Stop Trump, is planning to march toward the convention site and has already gone on the  move -- going outside the guidelines set up by the city. With at least 200 people starting to gather, the protest has brought together a mix of groups ranging from Black Lives Matter to several pro-socialism organizations.

The city has only allowed permitted protests a considerable distance away from the arena.

Other protests are also on tap for Monday.