Former Special Counsel Robert Mueller has agreed to testify before the House Judiciary and Intelligence Committees on July 17 after they subpoenaed the special counsel Tuesday, according to the committees' chairmen, Reps. Jerry Nadler, D-N.Y., and Adam Schiff, D-Calif.

Congressional Democrats have fought to get access to Mueller and his unredacted report on Russian interference in the 2016 presidential election and whether President Trump obstructed justice. Weeks of negotiations between House Democrats and the Justice Department ultimately ended with the subpoena.

Fox News also was told the Democrats did not tell Republicans about the Mueller subpoena, and most Republican lawmakers found out on the House floor or from reporters.

"Americans have demanded to hear directly from the Special Counsel so they can understand what he and his team examined, uncovered, and determined about Russia’s attack on our democracy, the Trump campaign’s acceptance and use of that help, and President Trump and his associates' obstruction of the investigation into that attack," Nadler and Schiff said in a joint statement.

House Republicans likely will try to press Mueller on anti-Trump text messages between former FBI Agent Peter Strzok and attorney Lisa Page and on an anti-Trump dossier authored by British ex-spy Christopher Steele. Democrats likely will ask about how Mueller reached his conclusion not to charge Trump and if there was pressure by Attorney General Bill Barr not to go after Trump more forcefully.

Barr said previously that he had no problem with Mueller testifying and would not stand in the way.

Trump did not comment at first, but in a possible dig at the Democrats, posted a simple tweet: "Presidential Harassment!!"

“The Mueller Report revealed that the Russians waged a ‘sweeping and systematic’ attack on our elections, and America’s top intelligence and law enforcement officials have warned that the Russians will attack our elections again," House Speaker Nancy Pelosi said in a statement. "Yet, sadly the President calls it a hoax, and suggests that he would welcome Russian interference again."

Mueller did not immediately comment on the subpoena. In a news conference last month in which he delivered his first public remarks in more than two years, the special counsel said he did not wish to appear before lawmakers.

"The report is my testimony," he said.

The news conference emboldened some Democrats' demands for answers and to push for impeachment proceedings against Trump. Many have accused the president of obstructing Mueller's two-year investigation, which found 100 contacts between Russian operatives and the 2016 Trump campaign. Mueller wrote that he found insufficient evidence to establish a conspiracy between the campaign and Russia. 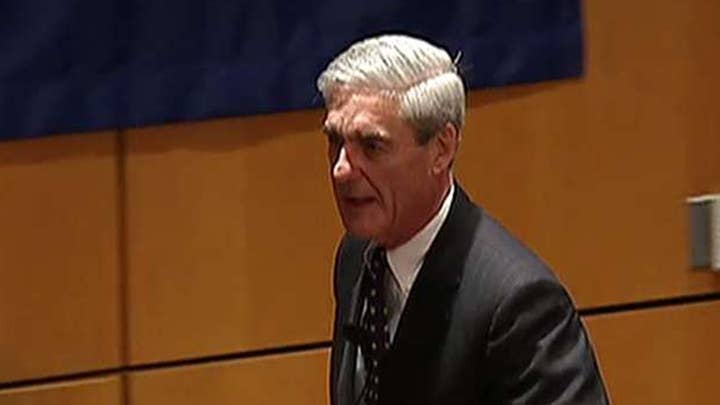 Republicans have said repeatedly that Mueller did not recommend charging Trump with colluding with the Russians or obstructing justice and have stressed for Democrats to move on.

Mueller reiterated last month that his 448-page report did not entirely clear Trump. “If we had had confidence that the president clearly did not commit a crime, we would have said so," he said.

The special counsel charged 34 people -- including 26 Russians -- with crimes related to his probe. High-level Trump campaign and administration officials have pleaded guilty in deals with federal prosecutors.

Democratic committee leaders had been under pressure from party members to get Mueller to appear. Plans to have Mueller voluntarily testify in April after an invite from Nader and Schiff went by the wayside as discussions lingered, the New York Times reported.

"Three months after the special counsel completed his investigation, two months after the attorney general made the less redacted report available to congressional leadership, and two months after I asked Chairman Nadler to invite Robert Mueller to testify, we may actually get to hear from the author of the report," ranking House Judiciary Committee member Rep. Doug Collins, R-Ga., said in a statement. While the special counsel found that no Americans conspired with Russia to attempt to" interfere in our elections, many have willfully misrepresented that conclusion while Democrats have neglected their responsibility to safeguard future elections from foreign influence."