The federal prosecutor named by Attorney General William Barr to look into the origins of the Russia investigation will come to a substantive conclusion, according to Rep. Mark Meadows, R-N.C.

"I can tell you that John Durham and Attorney General Barr are going to get to the bottom of it," he said.

"They are including in part of their surveillance - really looking at the intelligence community to make sure that justice is brought."

WHO IS JOHN DURHAM?

Rep. Jim Jordan, R-Ohio, who joined Meadows on "Hannity," added he agreed with the North Carolina lawmaker and that a previous report by the Justice Department's inspector general was fruitful.

"The attorney general of the United States and U.S. Attorney John Durham are doing an investigation," he said. "They have told us this is broader than just the FBI - they're going to look at all of this.

"First, Horowitz is going to come out. His report a year ago was very good," Jordan said, referring to inspector general Michael E. Horowitz. 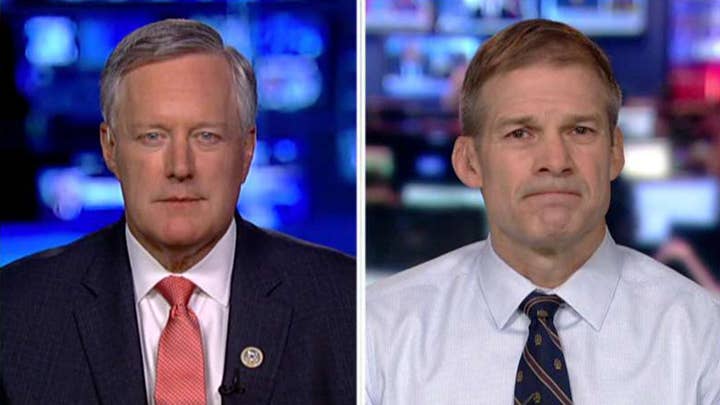 "Then we will see where Mr. Durham and Mr. Barr where their investigation and what they come back with."

As part of its ongoing "multifaceted" and "broad" review into potential misconduct by U.S. intelligence agencies during the 2016 presidential campaign, the Justice Department revealed Monday it is also investigating the activities of several "non-governmental organizations and individuals."

Additionally, the DOJ announced that the probe, led by Durham, was looking into the involvement of "foreign intelligence services."

Former Trump aide George Papadopoulos told Fox News last month that an informant who was likely "CIA and affiliated with Turkish intel" had posed as a Cambridge University research assistant in September 2016 and tried to "seduce him" to obtain information linking the Trump team to Russia.

The information was contained in a letter to House Judiciary Committee Chairman Jerry Nadler, D-N.Y., who had inquired as to the scope of Durham's investigation.

The letter could indicate that the DOJ is looking closely at work done during the campaign by Fusion GPS, the firm retained by the Hillary Clinton campaign and Democratic National Committee (DNC) to conduct opposition research against the Trump campaign.