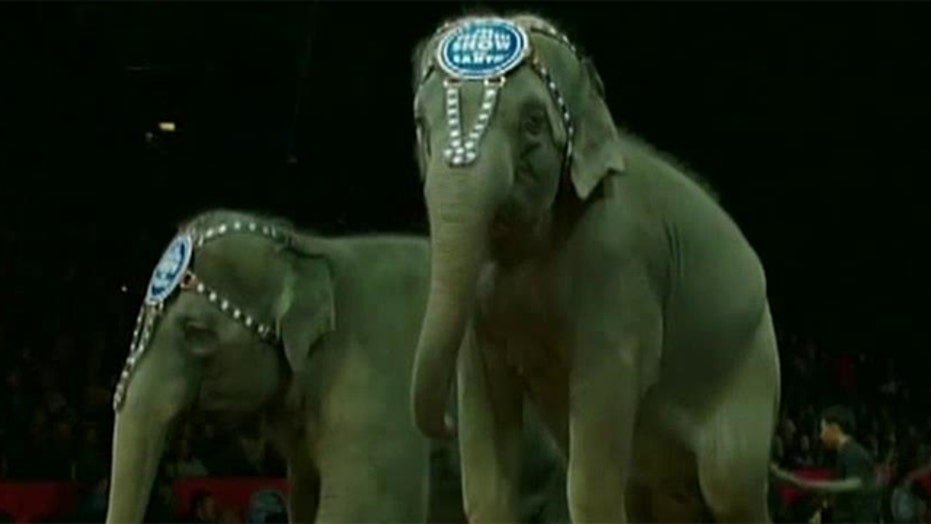 Elephants are about to put on their last act as the iconic image of the Ringling Bros. Circus.

Coming after more than 100 U.S. cities have passed ordinances restricting the use of elephants -- and decades of criticism by animal-rights groups -- the circus operators plan to phase out elephants in their act over the next three years.

In retiring them to a 200-acre plot in central Florida, the circus will bring to an end a performance and tradition that began with the purchase of Jumbo by PT Barnum in 1882.

"We're very happy that we're going to see the day when Ringling stops using elephants in circuses and that we're starting to see others go in that direction as well," PETA spokeswoman Delcianna Winders said. "We would just like to see that day come sooner because for those animals on the road, every single day is a day of suffering."

Criticism has been sparked over trainers using bullhooks -- long, hooked poles -- as well as ropes and chains to handle the animals. The Los Angeles City Council, for example, has banned not only the use of bullhooks but baseball bats, axe handles and pitchforks as well.

Circus operators, though, defended the treatment of elephants but did acknowledge that changing consumer tastes are increasingly "uneasy" with animal performances.

"I think there's a level of thoughtfulness that people have now," said Kenneth Feld, CEO of Feld Entertainment, which owns Ringling Brothers.

"I'm sorry my kids maybe won't be able to see the elephants at Ringling Brothers Barnum and Bailey, but I think the great thing is we're doing everything we can to ensure that they're going to be around for many generations."

The 43 Asian elephants form the largest herd in North America -- from Mysore at age 69, to the youngest, Mike, born at the Conservation Center two years ago. The handlers have been familiar with many of the elephants since birth.

"We're going to be doing a lot of research and conservation with them, evolving all the time and bettering their care, knowing more and more and learning everything about them is the most important thing for us. Our mission is to make sure there's elephants in North America for generations to come," said Trudy Williams, one of the elephant handlers.

Keeping them fed is no small job.

The cost of maintaining an Asian elephant for one year is roughly $65,000. The retirees eat about 150 pounds a day of hay, fruits and vegetables, and are particularly fond of white bread and animal crackers.