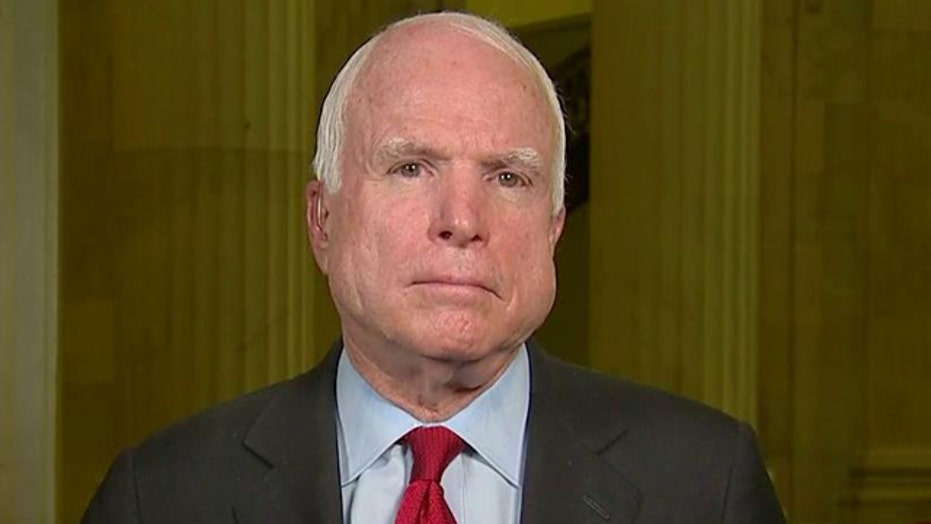 Lawmaker provides insight into the fight against ISIS

President Obama earned positive marks from lawmakers on both sides of the aisle for announcing an unequivocal campaign to destroy the Islamic State, but Republicans are worried the president is relying on the wrong military model to go after the terror group.

In his prime-time address Wednesday night, Obama described a four-point “counterterrorism” strategy and compared the operation to efforts against al-Shabaab in Somalia and an Al Qaeda affiliate in Yemen.

But Republican lawmakers suggested the Islamic State represents a far bigger challenge than the Islamic militants who operate in Somalia and Yemen – and said the U.S. approach to those countries still hasn’t rooted out the terror threat.

Rubio said he’s glad Obama has “come around” on recognizing the threat posed by the Islamic State – and on pushing to arm moderate Syrian rebels – but voiced concern about the strategy.

Obama on Wednesday laid out a four-point plan that included expanding airstrikes in Iraq and Syria; supporting Syrian rebels and Iraqi security forces; preventing ISIS attacks by ramping up intelligence efforts and working with allies; and providing humanitarian support to civilians.

“This counterterrorism campaign will be waged through a steady, relentless effort to take out ISIL wherever they exist, using our air power and our support for partner forces on the ground,” Obama said.

The president claimed the strategy “of taking out terrorists who threaten us, while supporting partners on the front lines, is one that we have successfully pursued in Yemen and Somalia for years.”

Yemen is the base for Al Qaeda in the Arabian Peninsula, a powerful Al Qaeda affiliate; Somalia is home for the militant group al-Shabaab, which carried out the brutal attack on Kenya’s Westgate mall last year.

In those countries, the Obama administration has pursued airstrikes against terror targets, in cooperation with the host governments. The U.S. scored a major success earlier this month when al-Shabaab leader Ahmed Abdi Godane was killed in a U.S. strike. Obama cited the Godane strike in his address Wednesday night.

But both terror groups continue to operate, and extremists reportedly launched another suicide attack earlier this week targeting African Union troops in Somalia. Somalia is still considered one of the most unstable countries in the world.

In interviews with Fox News, Sens. Ted Cruz, R-Texas, and John McCain, R-Ariz., each pointed to Obama’s remarks about Yemen and Somalia in questioning the president’s plan.

“Both are hotbeds of terrorism. Our approach has not worked in Yemen and Somalia,” Cruz said.

“He compares ISIS to Yemen and Somalia. There's no comparison,” McCain said.

McCain and Sen. Lindsey Graham, R-S.C., are calling for the president to build on his current approach by approving additional special forces and advisers for the mission against ISIS. They also called on Middle East countries like Jordan and Egypt to contribute forces for ground operations in Syria.

House Speaker John Boehner, in a written statement, said he’s concerned the president views the anti-ISIS efforts as “an isolated counterterrorism campaign, rather than as what it must be: an all-out effort to destroy an enemy that has declared a holy war against America and the principles for which we stand.”

The speaker said Thursday that “airstrikes alone will not accomplish what we’re trying to accomplish.” He said “somebody’s boots have to be on the ground,” while suggesting Syrian rebels could fill that role.

Congressional leaders nevertheless are voicing support for an expanded military mission of some kind in the Middle East.

"Over the next week, following a series of briefings, Congress will work with the administration to ensure that our forces have the resources they need to carry out these missions," said Senate Republican Leader Mitch McConnell.

Majority Leader Harry Reid, D-Nev., predicted Congress would swing behind the president's request, "not the least of which is the authority to equip and train Syrian troops to fight these ... evil terrorists."

Meanwhile, rank-and-file Republicans met privately in the House to plan their response.

"We do not want to go home without voting on some measure that goes toward destroying and defeating ISIS wherever it exists," said Rep. Michael McCaul, R-Texas, referring to the militants.

Congress is in a brief two-week pre-election session, and the president's request is an unexpected addition to what had, until recently, seemed a period devoted to domestic issues such as extending government funding beyond the end of the current budget year.

In his speech, McConnell envisioned a "multi-year campaign" that would extend beyond Obama's time in office.

Rep. Pete King, R-N.Y., told reporters a 15-year conflict may be in the offing and that the country needs to adopt a "wartime footing" when it comes to defense spending.

Rep. Howard "Buck" McKeon, R-Calif., chairman of the House Armed Services Committee, said in a speech that he supports several elements of Obama's strategy, including an expansion of airstrikes and training and equipping the rebels.