New effort to break up the 9th Circuit Court

Strategy Room: Joe Lestingi and Charmaine Yoest on the new effort by Congress to split up the large district

As judges on the 9th Circuit Court of Appeals weigh the legality of President Trump’s immigration executive order, a Republican push to split up the controversial court -- and shrink its clout -- is gaining steam on Capitol Hill.

They argue that the 9th is too big, too liberal and too slow resolving cases. If they succeed, only California, Oregon, Hawaii and two island districts would remain in the 9th's judicial fiefdom.

Right now, Flake said, the circuit is far too sprawling.

“It represents 20 percent of the population -- and 40 percent of the land mass is in that jurisdiction. It’s just too big,” Flake told Fox News on Wednesday. “We have a bedrock principle of swift justice and if you live in Arizona or anywhere in the 9th Circuit, you just don’t have it.”

Flake says it typically takes the court 15 months to hand down a decision.

Conservatives have mocked the 9th Circuit for years, often calling it the “Nutty 9th” or the “9th Circus,” in part because so many of its rulings have been overturned by the U.S. Supreme Court.

The court has a reputation as one of the most liberal in the country, in large part because of its makeup. Eighteen of the court’s 25 active judges have been appointed by Democrats. Former President George W. Bush appointed six justices, while former President Barack Obama appointed seven. 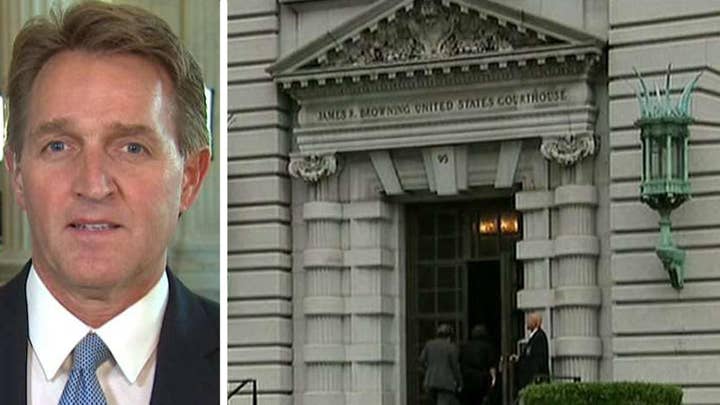 Under Flake’s bill, the new circuit would cover Nevada, Washington, Idaho, Montana, Arizona and Alaska, leaving the 9th with three Pacific states as well as the Northern Mariana Islands and Guam.

A separate House version introduced by Rep. Andy Biggs and four other Arizona Republicans would leave Washington state in the 9th Circuit.

Congressional efforts to split the circuit go back to 1941.

“The problem is the judges in the 9th Circuit, particularly the liberal judges, don’t want to give up any of their jurisdiction,” Flake said.

Congress created the court in 1891. At the time, the area was sparsely inhabited – only four percent of the U.S. population lived in the area compared to today’s 20 percent.

In 1998, Congress appointed a commission to reexamine the federal appeals courts’ structure. The commission ultimately recommended against splitting the 9th Circuit.

But carving up the large circuit isn’t out of the realm of possibility. In 1929, Congress split the 8th Circuit to accommodate a population boom and increased caseloads.

“We don’t complain about courts being too conservative,” he told Fox News. “The truth is… the liberal side of that court provides the conflict we need to settle our most basic disagreements.”

He added that the 9th Circuit’s track record of rulings being overturned -- sometimes unanimously by the U.S. Supreme Court -- is all part of the judicial process.