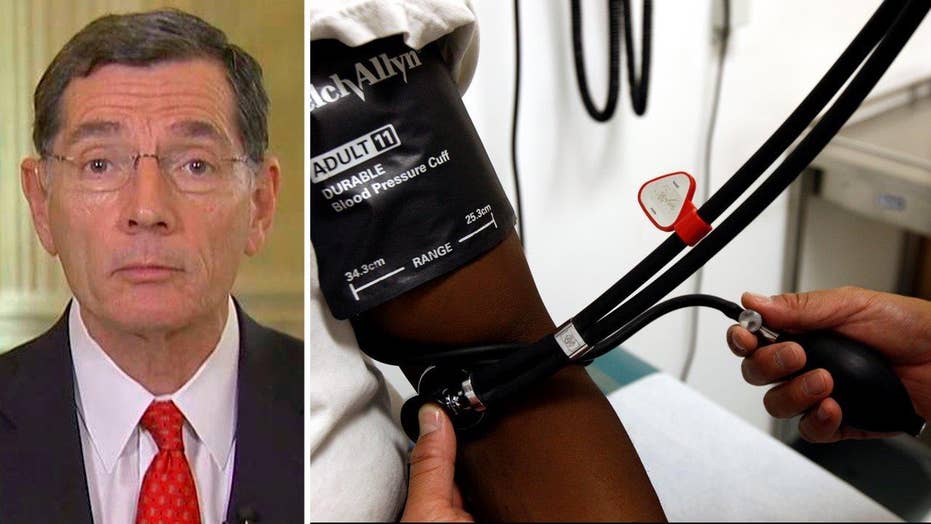 Republicans delivered Tuesday on their “Day One” promise to start repealing ObamaCare at the start of the 115th Congress, introducing a resolution to dismantle the 2010 health care law.

“Today, we take the first steps to repair the nation’s broken health care system, removing Washington from the equation and putting control back where it belongs: with patients, their families and their doctors,” said Wyoming GOP Sen. Mike Enzi, chairman of the Senate Budget Committee.

Enzi and other leaders of the Republican-controlled Congress are relying on a parliamentary maneuver known as “budget reconciliation” to dismantle the law because it avoids a Senate Democrat filibuster and requires only a 51-vote majority for passage in the chamber, not the 60-vote majority.

The GOP can use the reconciliation tactic because federally-subsidized ObamaCare directly impacts the federal budget. (And congressional Democrats used the same tactic in 2009 to complete passage of the law, officially known as the Affordable Care Act.)

Incoming GOP President Donald Trump won the 2016 White House race in part on a vow to repeal ObamaCare on “day one” of his administration and to replace it with “something terrific.” But the dismantling process will be decidedly longer and more complicated.

A top Senate aide declined Tuesday to give a timeline on when the resolution -- which must pass in two House and two Senate committees -- will be passed and ObamaCare will officially be repealed.

The aide said the focus is on getting through the process “as quickly as possible.”

However, Enzi’s office said that Senate debate on the issue will begin next week and that the committees should hold preliminary “repeal legislation” votes by Jan. 27.

The House is expected to begin debate on the issue next week.

To be sure, Republicans are now the party under pressure with ObamaCare -- after years of crticizing the law and now that they finally have a president who will sign repeal-and-replace legislation.

In addition, some of the most conservative House Republicans are already raising concerns about their leaders wanting multiple years to implement a replacement plan, fearing backlash from voters at home.

And Trump’s victory over Democratic presidential nominee Hillary Clinton has spotlighted her party’s argument that Republicans have no viable ObamaCare replacement, despite years of criticism and promises.

Meanwhile, President Obama will be on Capitol Hill on Wednesday to talk with fellow Democrats about how to save his signature health care law.

And Democratic congressional leaders are urging rank-and-file members to hold rallies to tell voters about the importance of preserving ObamaCare. They have planned a national “Day of Action” on the matter for January 15.

Dismantling the government-mandated insurance without an alternative for the roughly 20 million Americans now enrolled could indeed be a political disaster, particularly before the 2018 midterms.

ObamaCare was created to drive down overall insurance costs by reducing emergency-care visits and other uninsured medical expenses.

However, lower-than-projected enrollment among younger, healthy Americans and insurance companies dropping out of the program have contributed to significantly increasing premium costs.

And while 2016 voters disaffected with big government will likely want Trump to fulfill his repeal-replace promise, the president-elect and others have hinted at keeping some parts of ObamaCare, including young adults being allowed to stay on their parents’ plan.

Late Tuesday, the House passed the set of rules that will govern the body through the 115th Congress -- minus a controversial provision quietly inserted late Monday by Republican members to gut the independent Office of Congressional Ethics and put it under lawmakers' control.

The provision was removed under pressure from Trump, as well as furious Democrats.

The approved rules package, however, now includes provisions that allow Republican leaders to fine members who use electronic devices to take pictures or video from the House floor.

The change comes six months after Democrats live-streamed a sit-in on the House floor for 26 hours to call attention to their demand for votes on gun control.

Under the new rules, first-offenders get a warning. The next offense comes with a $500 fine, and ensuing ones could cost members $2,500 apiece.