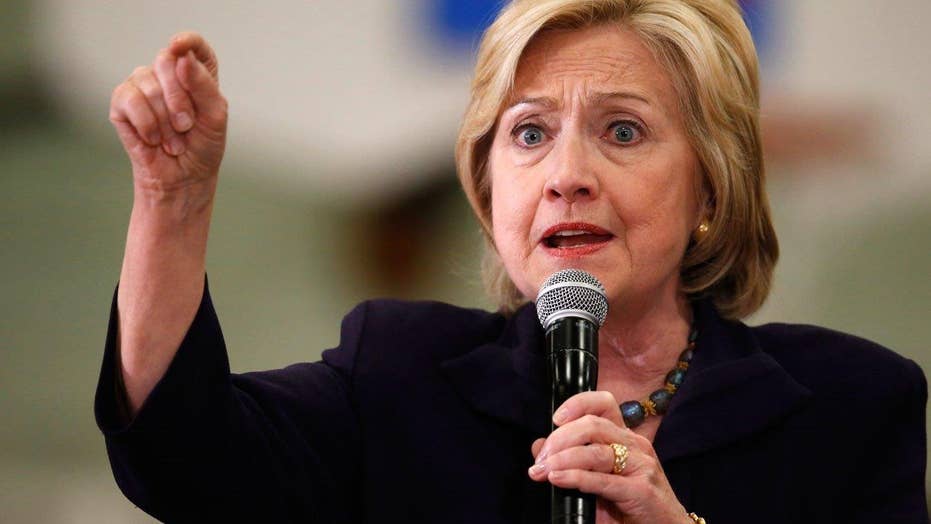 Hillary Clinton under fire from the far left

Democratic candidate apologizes for using the phrase 'illegal immigrant'; Ed Henry with the latest on 'The O'Reilly Factor'

The cost of Hillary Clinton’s campaign promises has topped $1 trillion – a spending “binge” that would require middle-class tax hikes to pay for it, Republicans say.

Clinton critics say she hit the $1 trillion mark over the weekend, when she unveiled a $275 billion infrastructure plan.

"To build a strong economy for our future, we must start by building strong infrastructure today," the Democratic presidential front-runner said Sunday afternoon.

The latest plan calls for $250 billion in direct investment over the next five years. An additional $25 billion would fund a national infrastructure bank. This comes on top of an array of other Clinton economic proposals – including a $350 billion college affordability plan.

Though the Democratic candidate is vowing to cut taxes for the middle class, Republicans say that’s just not possible considering the magnitude of her spending proposals.

“With Hillary Clinton’s spending binge already at a trillion dollars and counting, it’s clear she wants to treat Americans’ tax dollars like every day is Black Friday with no plan to pay the bill,” Republican National Committee spokesman Michael Short said in a statement. “The real reason Hillary Clinton isn’t saying how she’ll pay for her trillion-dollar spending increase is because she knows it means raising taxes on the middle class.”

The Clinton campaign challenged some of the RNC’s calculations, though, while reiterating the candidate’s pledge not to raise middle-class taxes.

"Hillary Clinton believes middle-class workers deserve a raise, not a tax increase,” Clinton spokesman Brian Fallon said in a statement. “Her plan—which calls for major new investments in higher education, infrastructure, and universal pre-K—proves it is completely possible to propose bold, ambitious ideas and pay for them without resorting to tax hikes on working families.”

So far, Clinton has offered few specifics on how she'd fund her latest plans. Her campaign said that her infrastructure proposal would be paid for by closing corporate tax loopholes but didn't detail which breaks would be targeted. The plan released by the campaign said Clinton would “fully pay for these investments through business tax reform.”

Clinton, meanwhile, has pledged to roll out hundreds of billions of dollars in middle-class tax cuts, saying she'd increase taxes on the wealthy to fund the new breaks. She's vowed not to raise taxes on families earning less than $250,000 a year.

Even The Washington Post editorial board questioned whether that’s a realistic promise considering the various spending proposals and tax credits on the table.

The newspaper said in an editorial over the weekend that the vow not to raise taxes on those earning less than $250,000 while still funding promised benefits is “implausible.”

“There is simply no way that the federal government can meet its current fiscal commitments, plus the increased demands of an aging population, and provide the new forms of middle-class relief and business tax relief Ms. Clinton promises, while tapping only the top 3 percent of earners,” the Post editorial board wrote.

Other proposed Clinton policies include universal pre-K, combating substance abuse and expanding family leave, projected to add hundreds of billions of dollars more to the pricetag of her plans. The RNC estimates that before the infrastructure proposal was announced, her campaign already had proposed at least $745 billion in new commitments over 10 years.

Jeff Bechdel, communications director with the conservative America Rising PAC, said both Clinton and Democratic rival Vermont Sen. Bernie Sanders “should be honest” that it will take tax hikes “on Americans at every income level” to pay for their plans.

Clinton aides say her economic initiatives will be the most expensive of her campaign and plan to roll out proposals for new investments in manufacturing and research in the coming weeks. On Sunday, she added a pledge to give all American households access to high-speed Internet by 2020.

Clinton, though, is using her plans to draw a contrast with Sanders.

"I'm the only Democrat in this race pledged to raise your income, not your taxes," Clinton said at an event in Boston.