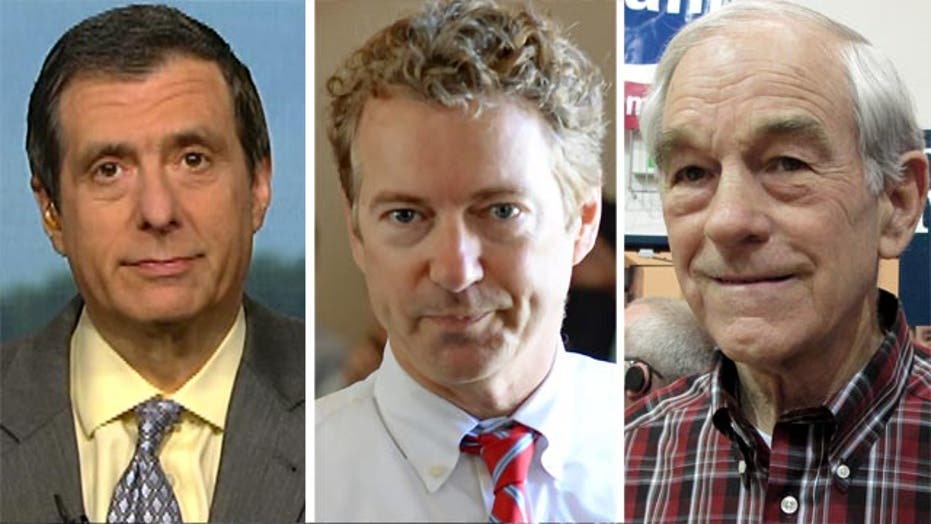 Kurtz: Rand Paul needs to prove he isn't his father

How has the media viewed the Kentucky Republican Senator?

Rand Paul is the most interesting presidential possibility out there right now. But will the media hang his father’s record around his neck like an albatross?

That may be unfair, since the Kentucky senator is a very different lawmaker and potential 2016 candidate than his father, former Texas congressman and perennial presidential contender Ron Paul. But I’m starting to think it may be inevitable.

“Everybody that calls [Ron] wants to argue about their differences. They don’t really have differences. They might have fractional differences about how to do things, but the press always want to make it into some kind of story that isn’t there.”

I would beg to differ. Both men are libertarians, to be sure. I’ve watched Ron Paul speak to campaign crowds, and he can get them wound up on the gold standard, abolishing the IRS and other issues that make his ardent fans swoon but also rendered him unelectable as a national candidate. Rand Paul is a conservative pragmatist who has been breaking with Republican orthodoxy, particularly when it comes to reaching out to African-Americans.

As the magazine profile by Ryan Lizza makes clear, Rand Paul’s life was very much intertwined with his dad’s career. Growing up, he worked on a number of his father’s campaigns, once taking off a semester to join his unsuccessful Senate race. "Ultimately, Rand was saved from political obscurity by his father. In 2008, Ron Paul decided to run for president. The campaign raised an extraordinary $35 million by cultivating a small but intensely committed following that later carried Rand Paul’s message, too.”

Paul himself once wrote of his impending Kentucky race: “After seeing how the establishment treated my father during his presidential campaign, I had every reason to believe that the powers-that-be would do everything they could to keep another Paul away from the reins of government.”

The elder Paul is an isolationist, and while the younger Paul doesn’t go that far, he is an outspoken critic of U.S. military intervention abroad and has called for an end to foreign aid. His challenge is to ensure that their approach to world affairs aren’t morphed in the public mind.

“Paul has spent the past few months often clumsily trying to convince voters that his foreign policy differs from his father’s. Rand is perhaps best known, thus far, for his nearly 13-hour filibuster last year to protest the administration’s use of drones—a tactic that further convinced Republican hawks that he doesn’t share their assessment of the risks posed by terrorism. Over the summer, Paul was under constant attack from rivals, such as Governor Rick Perry, of Texas, who described him as ‘curiously blind’ to the threat posed by the Islamic State in Iraq and al-Sham. As with the criticisms of his past statements on civil rights, Paul felt that he was the victim of a smear campaign. ‘Unfair criticism from people who have partisan goals,’ he told me.”

Interestingly, John McCain, one of Paul’s frequent critics, is quoted as saying that the freshman senator has “evolved.”

Paul has also had his share of battles with the media, though he remains fairly accessible. He continues to push back against a 2010 interview with MSNBC’s Rachel Maddow on whether he would have supported part of the Civil Rights Act, and there is this telling comment: “As my dad often had to deal with in his 2008 presidential campaign, any outside-the-box or unconventional thinking is either dismissed or used to malign one’s character.”

And he takes a swipe at the New York Times for also introducing what might be called the Ron Paul Factor. A story in January raised questions about some people associated with the ex-congressman, including John Birch Society members and others who championed the Confederacy.

“‘I really was disappointed,’ Rand said, his voice rising. There was a quote ‘from some guy who I’ve never met saying something about how slaves should have been happy singing and dancing because they got good food or something. Like, O.K., so now I’m in the New York Times and you’re associating me with some person who I don’t know.’” The only association was “through being related to my dad.”

Paul, by the way, was quoted in that Times piece, saying “I want to be judged by who I am, not a relationship.” Some of the individuals cited are affiliated with  the Ludwig von Mises Institute in Alabama, which was launched with money raised by Ron Paul.

It’s hard to imagine that Rand Paul would be where he is without his family name and the backing of his father’s network, but that is clearly a double-edged sword. As for his mixed feelings toward the media, well, he did grant the New Yorker four interviews for the piece.