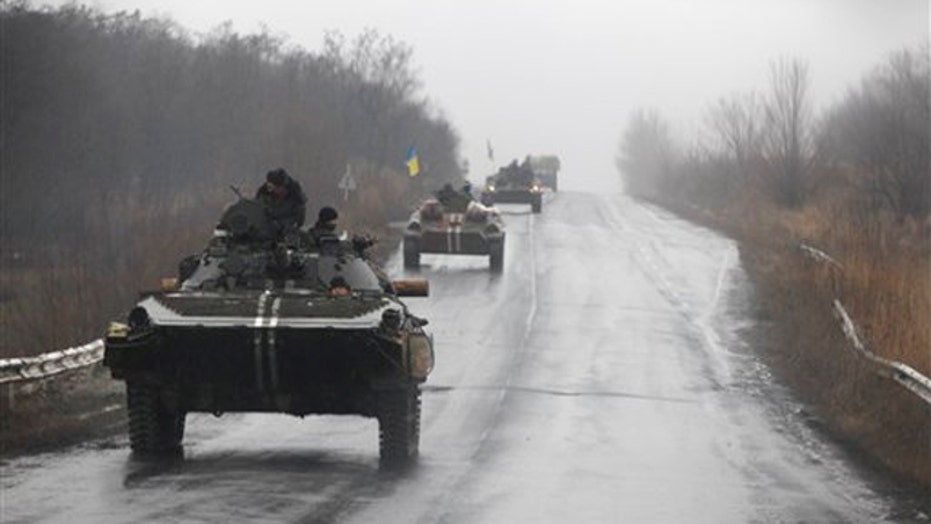 President Obama is facing rising pressure from former officials, security analysts and top lawmakers to provide Ukraine lethal military aid to help battle Moscow-backed rebels gaining ground in the country's east -- raising the prospect of a proxy war with Russia should the U.S. take that step.

Though the State Department insisted Monday that "no decisions have been made," the president reportedly is considering the calls to send American weapons to the embattled government. Doing so would mark a significant policy shift, and officials took a cautious tone Monday when peppered with questions about the administration's thinking.

"I don't think anybody wants to get into a proxy war with Russia," State Department spokeswoman Jen Psaki said. She said the objective is "to change the behavior of Russia," citing sanctions as one tool toward that goal.

Asked about the possibility of arming the Ukrainian government, Psaki acknowledged, "Naturally we take into account events on the ground and events that are ongoing."

One concern is that there is no guarantee Ukraine's military would be able to use American weapons effectively enough to turn the tide.

But pressure is building from Capitol Hill and high-level policy circles in Washington.

On Monday, several major think tanks -- the Atlantic Council, the Brookings Institution and the Chicago Council on Global Affairs -- issued a report calling for arming the Ukraine government.

The paper was authored by several former officials, including Michele Flournoy, head of the Center for a New American Security and a former top official in Obama's Defense Department. The paper urges the U.S. to consider sending anti-armor missiles, as well as armored Humvees and surveillance drones.

The report argues the best way to deter Moscow is "by raising risks and costs to Russia of any renewed major offensive."

The report says: "That requires providing direct military assistance -- in far larger amounts than provided to date and including lethal defensive arms -- so that Ukraine is better able to defend itself."

The report also recommends the U. S. government provide Ukraine $1 billion in military assistance "as soon as possible" in 2015, followed by an addition $1 billion in fiscal 2016 and 2017.

Still, some caution about moving too quickly. An unnamed senior administration official told The Associated Press that the president is concerned about the Ukrainian military's ability to use high-powered American weapons.

Psaki said Monday "there are a range of factors that senior officials in the administration consider with every component of aid we've provided."

She added that the focus of the administration remains on pursuing a solution through diplomatic means.

But others say the U.S. cannot wait any longer for action.

"For God's sake, can't we help these people defend themselves? This is not an incursion. This is an invasion," McCain said, adding that Russia could threaten neighboring Moldova and other nations if not stopped.

On the Democratic side of the aisle, Sen. Robert Menendez, D-N.J., also sent a letter to Secretary of State John Kerry urging the administration to take action.

"The international community has an obligation to respond to these attacks and to Putin, who has willfully ignored commitments made under the Minsk Agreement and clearly signaled his intentions to escalate tensions in Ukraine and across the region," Menendez wrote in the Jan. 29 letter.  "While we should continue to pursue a diplomatic track, a more assertive international response, led by the United States, is required."

But despite resistance to past proposals to provide lethal assistance, Obama and Kerry seem to indicate that they are ready to revisit the discussion.

Until now, the White House has provided non-lethal aid like first aid kits, night-vision goggles and body armor but Kerry told The New York Times that he is open to discussing providing lethal aid during his visit to Kiev this week.

In the past, another administration concern has been Russia's military might.

Ukraine separatists, whom Western nations say are supported by Russian troops and armed by Russian-made weapons, announced a general mobilization plan that they claim would boost their manpower to 100,000.

Cease-fire talks broke down between Ukraine's government and Russian-backed rebels while Kiev reported 28 soldiers killed over the weekend in some of the deadliest fighting since a peace deal was signed in September.

Ukraine's military says it expects another rough round of fighting in the coming days, and has accused Russia of using the veil of humanitarian aid to funnel weapons to the rebels.

Though the Kremlin denies supplying the rebels, Reuters recently reported that international observers saw 81 cargo trucks crossing into Ukraine at a border checkpoint currently under control of separatists, offloading goods and returning to Russia the following day.

For now, the fiercest fighting reportedly is taking place around Debaltseve, a government-held railway hub that connects two eastern provincial capitals that rebels declared as independent. The fighting -- on both sides -- has racked up casualties.

On Monday, German Chancellor Angela Merkel appealed for a ceasefire to be urgently restored in Ukraine, under the terms of the Minsk peace plan, and said Germany would not support Kiev's military forces through deliveries of weapons.

The separatist rebellion erupted last April after Russia annexed Ukraine's Crimea in response the ousting of a Moscow-backed president by street protests in Kiev, which ushered in a government committed to integration with Europe.

Moscow denies it has any regular troops in Ukraine despite what the West and Kiev say is incontrovertible proof.