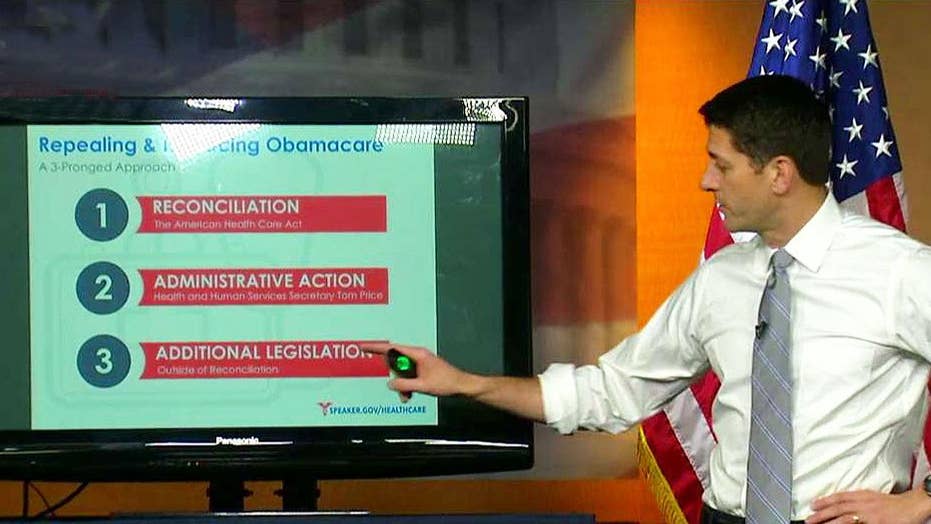 Speaker of the House presents plan

With the GOP health care bill under fire, House Speaker Paul Ryan went full wonk Thursday in a bid to sell the legislation to voters and colleagues -- rolling up his sleeves for an extensive PowerPoint presentation.

“This is the closest we will ever get to repealing and replacing ObamaCare,” Ryan said, after wheeling out a television for his de facto seminar broadcast live on multiple news channels.

The unusual classroom-style lesson marked Republican leaders' latest effort to get creative in order to keep the legislation on the rails. Down Pennsylvania Avenue, the White House has invited some of the plan's biggest critics -- members of the House Freedom Caucus -- for a night of bowling (and arm-twisting) next week, on top of a separate bowling night apparently being arranged later Thursday at the president's lanes.

The speaker's effort to close the deal, in true Ryan fashion, included a spread of charts and graphics as he described the coming “death spiral” and why “the time is now” for Republicans to unify behind their plan.

"We as Republicans have been waiting seven years to do this -- we as Republicans, who fought the creation of this law and rightly predicted its flaws,” Ryan said.

Though Ryan and his colleagues have dealt with a rocky reception from conservatives and moderates alike, the plan continues to move along on Capitol Hill. Two House committees -- Ways and Means and Energy and Commerce -- advanced their parts of the legislation on Thursday despite Democratic opposition and concern from other groups.

The vote came before dawn in the Ways and Means Committee, after nearly 18 hours of debate, while lawmakers on the Energy and Commerce Committee struggled for nearly 28 hours, with pressed suits and coiffed hair giving way to rumples and wrinkles. The lawmakers guzzled coffee and took breaks in their private cloakrooms but couldn't stray far out of fear they could miss a vote.

Ryan, at his demonstration, stressed that the legislation is part of a "three-pronged approach" to repealing and replacing ObamaCare.

The Wisconsin Republican explained the first part has to be done through a process known as “budget reconciliation.” Republicans are using this because it’s the only procedure available to them to avoid a Democratic filibuster. But the process has bizarre rules that mandate the legislation only deal with certain provisions.

GOP leaders say the American Health Care Act would be coupled with administrations actions and other bills to incorporate policies such as buying insurance across state lines.

Dubbed “Professor Ryan” by some on Twitter, the speaker acknowledged Thursday that “reconciliation has certain limits” but also attempted to counter conservative complaints the bill leaves components of ObamaCare in place by saying those regulations can be ended later.

Conservatives have complained the legislation creates a new system of tax credits to replace insurance subsidies and allows insurers to impose a surcharge for lapsed coverage, in place of existing 'mandate' penalties. Moderates have warned the plan does not do enough to preserve Medicaid coverage.

Now that the legislation is out of the first two committees, a single measure is expected to be sent next week to the House Budget and Rules committees.