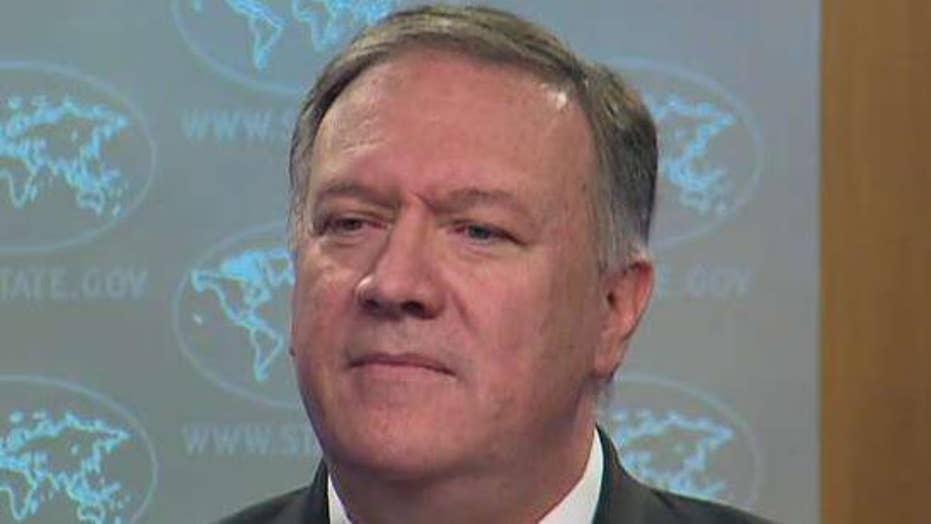 Secretary Pompeo on potential testimony in impeachment inquiry: When the time is right, all good things happen

Secretary of State Mike Pompeo responds to President Trump's tweet that he would 'love to have Mike Pompeo, Rick Perry, Mick Mulvaney and many others testify about the phony Impeachment Hoax.'

“Last week the regime shut down the internet to prevent the truth about the protests from getting out,” Pompeo said during a press briefing at the State Department.

“I asked Iranians to share their message with the United States so we could expose and sanction the abuses of the Iranian regime,” Pompeo said. “We’ve received to date nearly 20,000 messages, videos, pictures, notes of the regime’s abuses through telegram messaging services.”

Pompeo said he and President Trump are “following closely the protests that have recently broken out across that country.”

“Instead of addressing their grievances, Tehran has responded with violence and by blaming those outside the country,” Pompeo said.

Last week, Pompeo tweeted – in both Farsi and English – that, “I have asked the Iranian protestors to send us their videos, photos, and information documenting the regime’s crackdown on protesters. The U.S. will expose and sanction the abuses.”

After the shutdown, the internet slowly trickled back on in Iran on Friday amid protests and unrest that followed government-set gasoline prices sharply rising. The United States has sanctioned the country’s prominent telecommunications minister over the outage.

On Tuesday, Pompeo said, “To the courageous people of Iran who refuse to stay silent about 40 years of abuse by the ruling regime, I say simply this: The United States hears you, we support you, and we will continue to stand with you in your struggle for a brighter future for your people and for your great nation.”

Also on Tuesday, Pompeo highlighted recent documents detailing how the Chinese government has detained more than a million ethnic minorities, including Uighurs and other Muslims.

The classified blueprint leaked to a consortium of news organizations shows that while the Chinese government says the camps are for voluntary job training, the camps are instead forced ideological and behavioral re-education centers run in secret.

“They detail the Chinese Party’s brutal detention and systematic repression of Uighurs and other Muslim minority groups in Xinjiang,” Pompeo said. “These reports are consistent with an overwhelming and growing body of evidence that the Chinese Communist Party is committing human rights violations and abuses against individuals in mass detention.”

Pompeo said, “We call on the Chinese government to immediately release all those who are arbitrarily detained and to end its draconian policies that have terrorized its own citizens in Xinjiang.”

Meanwhile, wading into domestic politics, the secretary of state on Tuesday did not wave off the idea of testifying in the House Democratic-led Trump impeachment probe, shortly after Trump said he would “love” to have Pompeo and other top officials “testify about the phony Impeachment Hoax” -- if not for his interest in protecting the office of the president.

Asked about that tweet, Pompeo simply said, “When the time is right, all good things happen."

Fox News’ Gillian Turner and The Associated Press contributed to this report.