An official in China, who has played a key role in planning and executing a campaign that has swept up a million or more Uighur Muslims into detention camps, has been named, according to a report.

The Associated Press reported that newly revealed, confidential documents exposed Zhu Hailun, a Han Chinese official fluent in Uighur, the language of the local Turkic Muslim minority, as a brain behind the scenes.

Zhu, then the head of the powerful Political and Legal Affairs Commission of the Communist Party in the Xinjiang region, signed the documents published in 2017, the AP reported. A Uighur linguist recognized Zhu’s signature written on the top of some of the documents from his time working as a translator in Kashgar, when Zhu was the city’s top official.

“When I saw them, I knew they were important,” said the linguist, Abduweli Ayup, who now lives in exile. “He’s a guy who wants to control power in his hands. Everything.”

Ayup reportedly met Zhu in 1998, when he came to inspect his township. He was notorious for ordering 3 a.m. raids of Uighur homes, and farmers would sing a popular folk song called “Zhu Hailun is coming” to poke fun at his hard and unyielding nature.

“He gave orders like farmers were soldiers. All of us were his soldiers,” Ayup said. “Han Chinese controlled our homeland. We knew we needed to stay in our place.”

Zhu was born in 1958 in rural Jiangsu on China’s coast. In his teens, during China’s Cultural Revolution, Zhu was sent to Kargilik county, deep in the Uighur heartland in Xinjiang -- and never left.

Zhu reportedly joined the Communist Party in 1980 and moved up Xinjiang’s bureaucracy, in charge of hotspot cities. By the ’90s, he was said to have been so fluent in Uighur that he corrected his own translators during meetings.

“If you didn’t see him, you’d never imagine he’s Han Chinese. When he spoke Uighur, he really spoke just like a Uighur, since he grew up with them,” a Uighur businessman living in exile in Turkey, who declined to be named out of fear of retribution, told The Associated Press.

The businessman said he first heard of Zhu from a Uighur friend who dealt with the official while doing business. His friend was impressed, describing Zhu as “very capable” — a Han Chinese bureaucrat with whom the Uighurs could work. But, after years of observing Zhu oversee crackdowns and arrests, the businessman said he soon came to a different conclusion.

“He’s a crafty fox. The really cunning sort, the kind that plays with your brain,” he said. “He was a key character for the Communist Party’s policies to control Southern Xinjiang.”

This screenshot taken from the Xinjiang Legal News Network website shows the former head of the Xinjiang Communist Party Political and Legal Affairs Commission, Zhu Hailun, giving a speech at a work conference in Urumqi, China on February 2, 2017.  (AP Photo)

A 2009 riot in Xinjiang began the downward spiral.

Police swept through Uighur neighborhoods, brandishing rifles and rounding up hundreds for trial. Tens of thousands of surveillance cameras were installed.

Appointed head of the region’s security and legal apparatus in 2016, Zhu laid the groundwork for an all-seeing state surveillance system that automatically could identify targets for arrest. He crisscrossed the region to inspect internment centers, police stations, checkpoints and other components of an emerging surveillance and detention apparatus.

Uighurs began disappearing by the thousands. The leaked documents showed that Zhu directed mass arrests, signing off on notices ordering police to use digital surveillance to investigate people for having visited foreign countries, using certain mobile applications, or being related to “suspicious persons.” 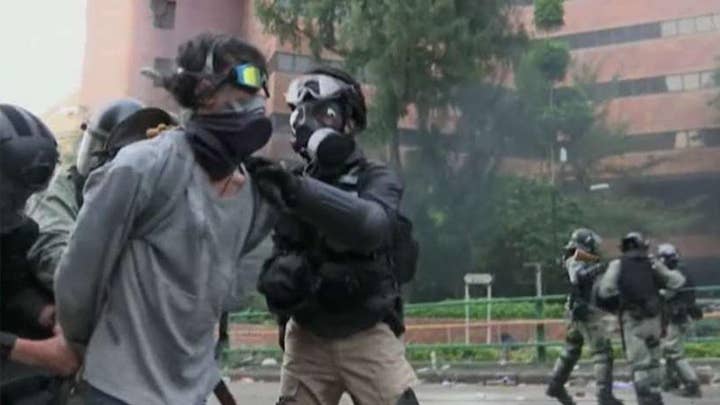 Zhu stepped down last year after turning 60. He did not respond to repeated requests for comment from the AP.

Activists and human rights groups have liked the “reeducation centers” to concentration camps, while China’s government insisted the detention sites were “vocation” centers aimed at training and skills development.