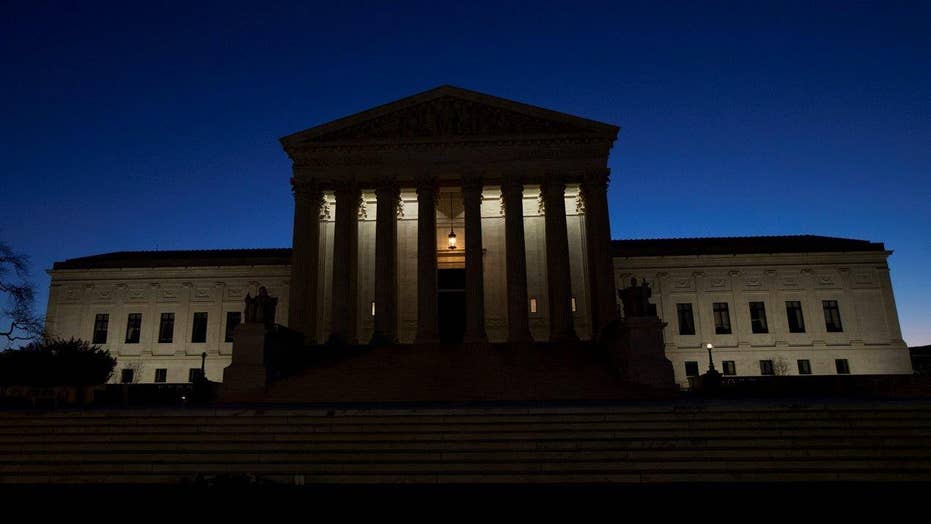 The unexpected death of Supreme Court Associate Justice Antonin Scalia is sparking a political battle in Washington and on presidential campaign trails across the country -- as Democrats and Republicans argue about replacing Scalia while the high court decides on such politically-charged issues as ObamaCare, immigration and abortion.

At issue is whether President Obama, in his final months of office, will attempt to appoint a replacement for Scalia, with the court now split between four Democratic and four Republican appointees.

The president said just hours after Scalia’s death was made public Saturday that he would fulfill his constitutional obligation by submitting an appointment “in due time.”

His announcement seemed to tamp down the passionate election-year debate about replacing Scalia and whether Obama would try to make an appointment while Congress is in recess.

But the calm lasted for only a matter of minutes as the GOP presidential candidates at a debate in South Carolina appeared to argue the next president should make the appointment.

“We are one justice away from a Supreme Court that would undermine the religious liberty of millions of Americans,” said Texas GOP Sen. Ted Cruz. “The Senate needs to stand strong and say, ‘We're not going to give up the U.S. Supreme Court for a generation by allowing Barack Obama to make one more liberal appointee.’ ”

On Sunday, Republican presidential candidate Donald Trump suggested on Fox News that Judge Diane Sykes, in the 7th Circuit Court of Appeals, in Milwaukee, would be a “very good alternative.”

Trump also is urging Senate Majority Leader Mitch McConnell to not allow the appointment process to proceed until the country has a new president.

He said during the debate that it's up to Congress to "delay, delay, delay."

McConnell, R-Ky., says the American people should have a voice in the selection of the next justice and that the appointment should not be filled until there is a new president.

Scalia died while on a retreat vacation at the Cibolo Creek Ranch, in Texas, in the middle of the Chihuahua Desert. He was 79.

Democratic presidential candidates also made their case, with a new president taking the White House in January.

Vermont Sen. Bernie Sanders, a self-proclaimed Democratic socialist, acknowledged on “Fox News Sunday” that he had “very different points of view” with the conservative Scalia.

“But I respect people willing to serve their country,” he said.

Still, Sanders on Saturday slammed Senate Republicans for refusing to confirm a replacement until a new president is elected.

He quipped at a party dinner in Denver that GOP senators apparently believe that the Constitution does not allow a Democratic president to nominate someone to replace Scalia.

In addition to cases on ObamaCare, immigration and abortion, the high court is also hearing politically-charged cases related to affirmative action and public labor unions.

The court is scheduled next month to hear a case -- Zubik v. Burwell -- in which a religious nonprofit is challenging the ObamaCare contraceptive mandate.

Justices are also expected to decide soon on whether Texas’ regulations on abortion centers create an undue legal burden on women trying to terminate a pregnancy.

The court is also reconsidering the constitutionality of college admissions based or race. The court first heard the affirmative action case, which came out of the University of Texas, Austin, two years ago.

Justices are also trying to decide whether Obama exceed his executive authority in 2014 when he tried to protect roughly 4 million illegal immigrants from being deported. And they are hearing a case on whether labor unions can collect dues from non-member public employees.

She said Republicans calling for the seat to remain vacant until the next president enters office is a "dishonor (to) our Constitution."

Obama honored Scalia’s work and said his duty to submit an appointment to replace Scalia is about democracy and is "bigger than any one party."

Senate Democrats this weekend also made clear that they would work vigorously to keep Republicans from trying to run out the clock on the appointment process. They quickly offered counterarguments to Republican statements that the decision should rest with the next president.

"It would be unprecedented in recent history for the Supreme Court to go a year with a vacant seat," said Senate Minority Leader Harry Reid, D-Nevada. "Failing to fill this vacancy would be a shameful abdication of one of the Senate's most essential constitutional responsibilities."

They pointed out that Associate Justice Anthony Kennedy was confirmed in an election year -- 1988 -- the final year of Ronald Reagan's presidency. Kennedy had been nominated in November 1987 after the Senate rejected Robert Bork and Judge Douglas Ginsburg bowed out.