Mayor Pete Buttigieg gave a simple three-word response to how he would deal with President Trump’s insults, attacks and tweets during the 2020 presidential election: “I don’t care.”

The 37-year-old mayor of South Bend, Ind., who would become the youngest U.S. president if he wins the 2020 race, told Chris Wallace during Sunday night’s Fox News Town Hall that Trump’s insults are a “show” that's distracting from the larger picture.

“It’s a very effective way to command the attention of the media,” Buttigieg said. “I think we need to make sure that we’re changing the channel from this show that he’s created.”

Buttigieg referred to Trump's tweets and insults as "grotesque things that you can't look away from." (AP)

Buttigieg called Trump tweets and insults “mesmerizing,” saying it’s hard for anyone to look away, even for him.

“It is the nature of grotesque things that you can’t look away,” Buttigieg said.

SLIDESHOW: BEHIND THE SCENES AT BUTTIGIEG TOWN HALL

Trump is known for coming up with creative insults for his opponents, Buttigieg included. The president recently mocked the presidential candidate as looking similar to the longtime mascot for Mad Magazine.

Alfred E. Neuman has been the official cartoon face of Mad since 1956. (Getty)

“Alfred E. Neuman cannot become president of the United States,” the president said, referring to the decades-old Mad character in an interview with Politico.

Buttigieg has been mayor of South Bend since 2012. While he’s been criticized for his lack of executive experience in running for president, Buttigieg still has more experience than Trump had when he won. 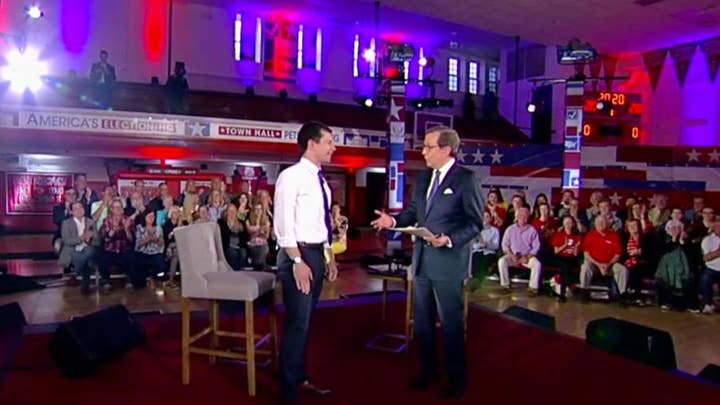 The mayor has also been criticized for his youthfulness, which may have been part of the president’s dig in reference to the adolescent-looking Neuman. Buttigieg is just two years older than the 35-year-old age requirement to run for president.

The 37-year-old told Wallace that the best way to combat Trump and his tweets is to focus on the lives of voters.

“If we make it less about him and more about you, paradoxically I think that’s the best way to defeat him,” Buttigieg said.