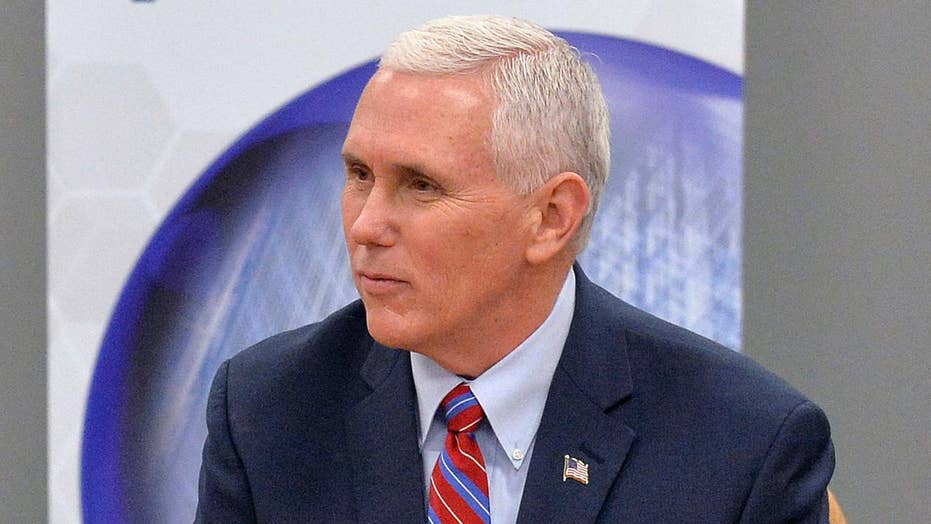 Despite the vice president meeting with conservatives, some outside groups are calling for a major overhaul of the legislation and blame Speaker Ryan; Mike Emanuel explains on 'Special Report'

Vice President Pence paid a thank you call Saturday in Florida, thanking voters for helping President Trump win the White House and vowing to repay them with a replacement for “nightmare” ObamaCare.

Pence’s visit marked the second consecutive weekend that he has traveled to states to garner support for the Republican-crafted bill to repeal and replace ObamaCare -- ahead of a key House vote scheduled for Thursday.

“Thank you for your hard work, your support, your prayers,” Pence said in Jacksonville, Florida. “Your votes have set us on a path to make America great again.”

Pence tried to assure voters that the GOP House leadership bill, the American Health Care Act, has solid Republican support, despite concern from some of Congress’ most conservative members.

“President Trump supports the bill 100 percent, and we all do,” said Pence, a conservative and former House member who in recent weeks has worked Capitol Hill for Republican support.

The scheduled House floor vote Thursday, if successful, could send the bill to the GOP-controlled Senate, then to the president’s desk.

Pence, who last weekend visited Kentucky, took his appeal Saturday directly to Florida voters, arguing that ObamaCare has failed them and others across the country.

“The ObamaCare nightmare is about to end,” he continued.

To be sure, Florida helped Trump in his improbable 2016 White House win. Its 29 Electoral College votes were the most of any battleground state. And Florida voted in 2008 and 2012 for Democratic President Obama.

Pence also hit home on other key issues for voters in Jacksonville, which has several military bases and one of the country’s biggest military populations.

He said Trump’s plan to increase defense spending by roughly $54 billion is “at the very heart of his budget plan” and that he will end the era of cuts for the military.

“We will restore the arsenal of democracy,” Pence said. “That I promise you.”

He also made clear the administration fully intends to fulfill campaign promises on national security, including getting criminal illegal immigrants “off the streets of Florida and out of this country.”

Pence, in vowing a more robust economy with more work opportunities, called Trump “the best friend America’s small businesses will ever have.”

He also defended the GOP health measure that could include work requirements for Medicaid recipients and Trump’s budget plan that attempts to cut the size of the federal government, suggesting an end to spending decisions “from the comforts of the taxpayer-funded metal desks in Washington.”