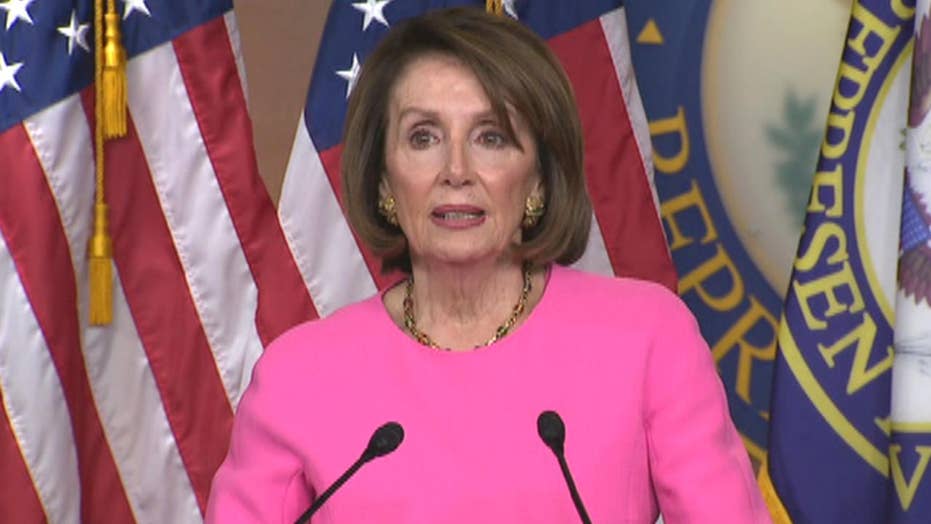 Pelosi wishes Trump's family, administration or staff would stage intervention 'for the good of the country'

House Speaker Nancy Pelosi on Thursday urged members of the Trump family, White House staff, and administration officials to stage an “intervention” for President Trump, after claiming again that he had a “temper tantrum" a day earlier.

During her weekly press briefing, Pelosi, D-Calif., was asked about the contentious—and short—meeting at the White House on Wednesday among her, the president, and Senate Minority Leader Chuck Schumer, D-N.Y., originally slated to discuss a potential bipartisan infrastructure deal.

KELLYANNE CONWAY FIRES BACK AT 'RICH' PELOSI AFTER CLASH: 'TREATS ME LIKE' HER 'MAID'

Minutes before the meeting, Pelosi accused the president of being “engaged in a cover-up” with regard to the Russia investigation. Trump did not stay in the meeting with the Democratic leaders for more than several minutes, and blasted Pelosi’s comments moments after.

“The president stormed out, pounded the table, walked out the door,” Pelosi told reporters. “Another temper tantrum, again, I pray for the president of the United States. I wish that his family, the administration, and his staff would have an intervention for the good of the country."

Pelosi also claimed that the president was using her comments about a “cover-up” as an “excuse” not to negotiate with Democrats.

Pelosi said that the president is good at distracting “from problems that he has and tries to change the subject.”

“He tried to say it’s because I said cover-up. We’ve been saying cover-up for a while,” she said.

Pelosi also again echoed her earlier claims that the president has “obstructed justice in plain sight.”

“It cannot be denied,” Pelosi said. “These can be impeachable offenses, but we want to follow the facts, get the truth to the American people, with a recognition that no one is above the law, and…that the president is engaged in a cover-up.”

With regard to impeachment, Pelosi said that it is a “very divisive way to go in our country,” but said congressional Democrats will “get the facts.”

“[The facts] may take us to a place where [impeachment] is unavoidable,” she said. “But we are not at that place.”

Meanwhile, the president said Thursday morning that, despite Pelosi’s claims of a “temper tantrum,” he was “extremely calm.”

“I was extremely calm yesterday with my meeting with Pelosi and Schumer, knowing that they would say I was raging, which they always do, along with their partner, the Fake News Media. Well, so many stories about the meeting use the Rage narrative anyway—Fake & Corrupt Press!” Trump tweeted Thursday.

Moments later, Schumer replied: “I would describe his demeanor as agitated.”

After the meeting Wednesday, Trump made a statement in the White House Rose Garden, and said he could not negotiate “under these circumstances.”

“Get these phony investigations over with,” Trump said Wednesday.