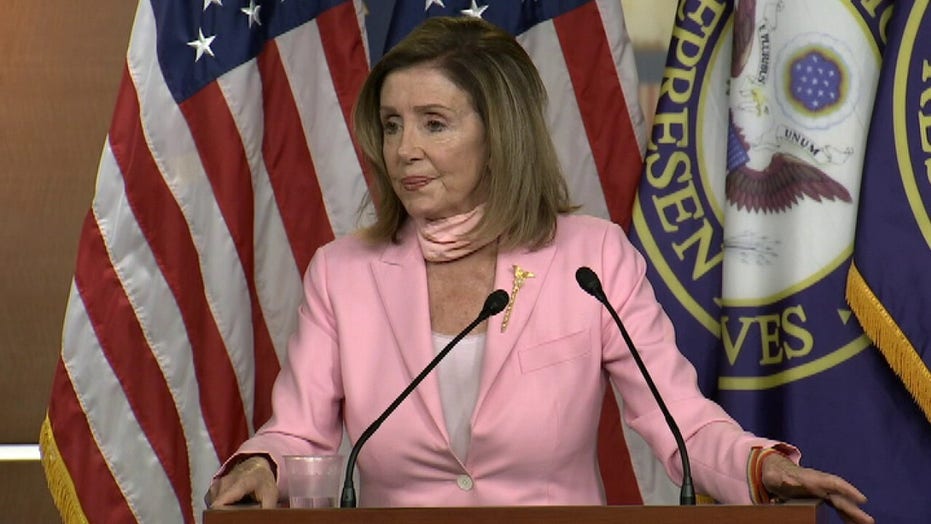 Pelosi on statues: If the people don't want it, it shouldn't be there

House Speaker Nancy Pelosi responds to the toppling of the Christopher Columbus statue in Baltimore during her press briefing.

House Speaker Nancy Pelosi Thursday declined to admonish protesters in her native city of Baltimore who pulled down a statue of Christopher Columbus and then tossed the monument into the city’s Inner Harbor.

"People will do what they do," Pelosi, D-Calif., said at a news conference Thursday at the Capitol.

Baltimore Mayor Bernard C. “Jack” Young, however, had harsh words for the protesters who destroyed the statue near Little Italy over the Fourth of July, saying he wouldn't tolerate the destruction of property. Young said the toppling was unacceptable and the perpetrators, if identified, "will be brought to justice," the Baltimore Sun reported.

Pelosi said "it's up to the communities to decide what statues they want to see" and taking down the Columbus monument "doesn't diminish my pride in my Italian American heritage."

But asked whether a commission should decide what statues go rather than a mob of protesters, Pelosi said people will do what they do.

"I do think that from a safety standpoint it would be a good idea to have it taken down if the community doesn't want it," Pelosi said of a more organized process to remove statues. "I don't know that has to be a commission but it could be a community view."

"Her job is to write laws. Instead, she encourages mobs to break them. She is complicit with criminal activity, plain and simple," McCarthy said.

Pelosi has spearheaded an effort to remove Confederate statues from the Capitol but has drawn a distinction between targeting those who committed treason against the United States and past presidents who owned enslaved people.

Pelosi said Thursday she's most concerned about looking forward and she's not wedded to physical monuments and tokens of the past. "I don't even have my grandmother's earrings," Pelosi said. 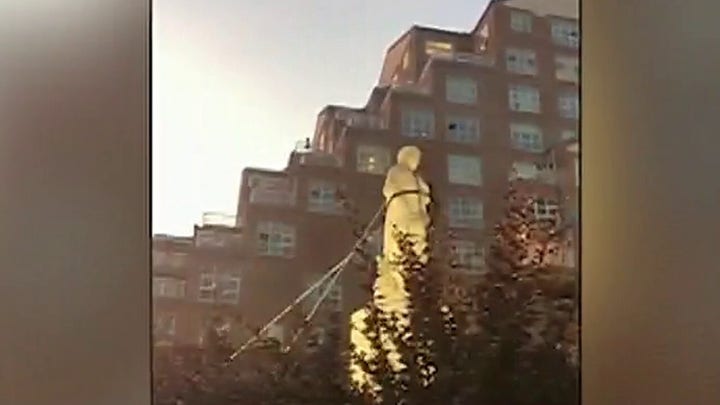 Former President Ronald Reagan helped unveil the Columbus statue in Baltimore in 1984. Rioters Saturday night pulled down the monument and then tossed it into the city’s Inner Harbor.

The statue had stood at the entrance to the city’s Little Italy neighborhood for 36 years, FOX 45 of Baltimore reported.

The attack came hours after rioters in Connecticut beheaded a Columbus statue there.

The Baltimore demonstrators had threatened to remove the statue for weeks, according to the station.

The destruction came after a Little Italy group hired private, unarmed security personnel to guard the statue around the clock – but it was unclear if anyone was trying to guard it Saturday, FOX 45 reported.

Video posted to social media showed people pulling chains that had been tied around the statue, with one black-clad rioter giving the statue a final push as a crowd cheered.

The toppling of the Columbus statue continued a wave of vandalism targeting statues and monuments across the nation after George Floyd's death – mostly targeting historical figures who critics regard as racists. Statues vandalized or destroyed in other cities have included those of George Washington and Thomas Jefferson, two American founding fathers who owned slaves.

While many Italian-Americans regard Columbus as personifying their history and heritage in the Western hemisphere, others see Columbus as a conqueror who brought death and oppression to the indigenous population after he first arrived in 1492.