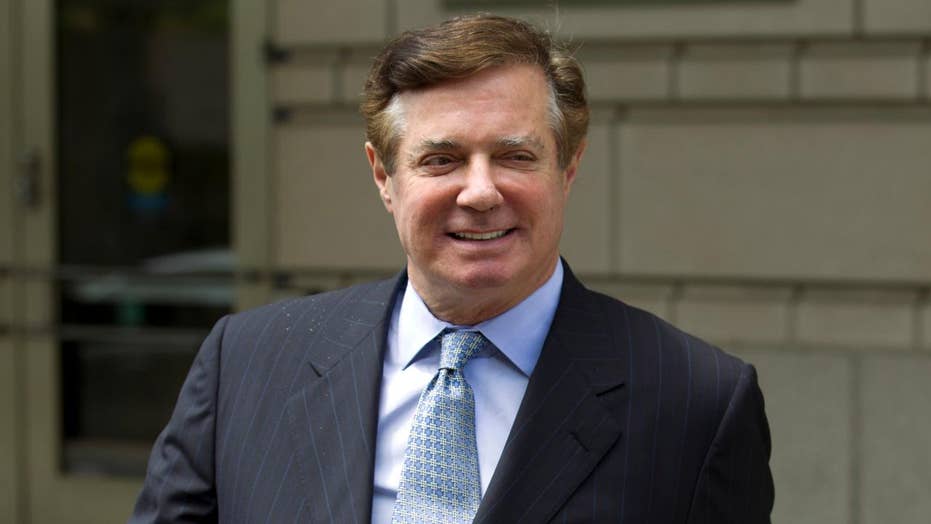 The judge on the case rejected a photo of Manafort's designer clothes as evidence. Peter Doocy explains on 'Special Report.'

Former Trump campaign chairman Paul Manafort racked up large bills but struggled to pay them in 2016, his bookkeeper testified in federal court Thursday.

Heather Washkuhn of the bookkeeping firm NKFSB said Manafort was a client from 2011 to 2018, and that she was in frequent contact with him, emailing him “several times a week.” Washkuhn said her firm charged Manafort about $100,000 a year for its services.

“Did there come a time in 2016 when Mr. Manafort had trouble paying his bills?” prosecutor Greg Andres asked the accountant in federal court in Alexandria, Va.

Manafort, facing charges of bank and tax fraud related to his work in Ukraine, has pleaded not guilty. He also faces charges in a separate federal case in Washington.

He served as chairman of Trump’s presidential campaign during the summer of 2016, though he was forced out in August of that year amid news stories about his ties to Ukrainian President Viktor Yanukovych.

Prosecutors have introduced a host of exhibits and are in the process of calling several witnesses as part of their effort to paint Manafort as a tax scofflaw who failed to report money spent on luxury items -- then lied to get bank loans when his foreign consulting work dried up.

In court on Thursday, prosecutors showed an email from 2016, In it, Washkuhn sends Manafort a list of bills and asks him to go through the list and tell her which ones to pay, and how to fund them.

They also went over an email from former Manafort partner Rick Gates asking Washkuhn if they could make a draw on a line of Manafort’s credit against securities. She replied in the email that there was nothing available to draw from.

During opening arguments this week, the defense team made it clear they intend to blame Gates, who handled some day-to-day business operations for Manafort, for many of the alleged reporting deficiencies.

Washkuhn testified Thursday she went to Gates when she couldn’t reach Manafort.

Notably, Washkuhn also testified she had no knowledge of any foreign holdings owned by Manafort, including the 14 different foreign LLCs that the government has said were shell companies that he controlled.

The government on Thursday also produced exhibits they say are false financial statements in 2015 that were doctored by Manafort to make it look like he had $4 million more than he did. The government says Manafort then used that document to apply for a loan from the Banc of California.

Prosecutors used Ayliff’s testimony to establish that a CPA relies on the client to tell the truth about their financial information.

“We rely on that information to prepare the tax return,” Ayliff said.

Earlier Thursday, U.S. District Court Judge T.S. Ellis III warned prosecutors that they could not prove a key part of their case unless prosecutors called Gates to the stand.

Referencing Gates, Ellis told prosecutors in court they “can’t prove conspiracy without him.”

Gates has cooperated with prosecutors and had been considered a potential star witness. Prosecutors suggested Wednesday they might not call him to the stand after all.

But on Thursday, Andres, the prosecutor, said the government still has “every intention” of calling Gates to testify.

Manafort left the courthouse in a minivan, though he was not seen through the vehicle’s tinted windows. Friday’s trial is set to continue with more testimony from Ayliff.

Fox News’ Anne Ball, Gregg Re and The Associated Press contributed to this report.