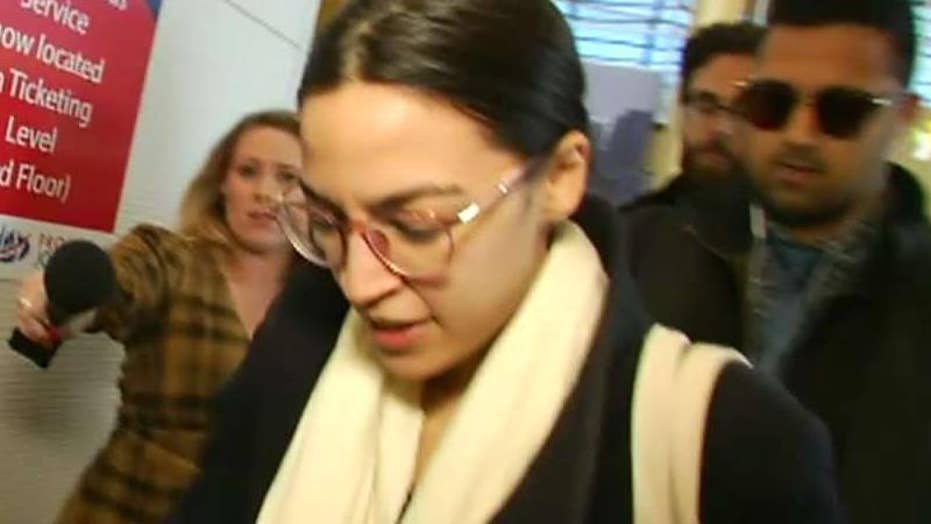 Rep. Alexandria Ocasio-Cortez is questioned by Fox News after a FEC complaint alleges the Democrat lawmaker and her chief of staff illegally moved $885,000 in campaign contributions 'off the books.'

New York Rep. Alexandria Ocasio-Cortez on Tuesday denied violating campaign finance law after a conservative government watchdog filed a complaint with the Federal Election Commission accusing the Democratic lawmaker and her chief of staff of being part of an "off-the-books operation" to spend hundreds of thousands of dollars on candidates last year.

“There is no violation,” Ocasio-Cortez exclusively told Fox News after landing Tuesday at Ronald Reagan National Airport. Asked if the complaint shows she was connected to "dark money" during the campaign, Ocasio-Cortez replied, “No, no.”

The complaint was drafted by the Virginia-based National Legal and Policy Center. It accuses Ocasio-Cortez and Saikat Chakrabarti, her chief of staff, of funneling nearly $1 million in contributions from political action committees Chakrabarti established to private companies that he also controlled.

The funds, the NLPC writes, were likely spent on campaign events for Ocasio-Cortez and other far-left Democratic candidates favored by Chakrabarti, who made his fortune in Silicon Valley and previously worked on Bernie Sanders' 2016 presidential campaign. But no precise accounting for the expenses is available, and the complaint asks the FEC to conduct an investigation into the matter immediately.

Chakrabarti did not return a request for comment. But he defended the set-up on Twitter, saying, "We were doing something totally new, which meant a new setup. So, we were transparent about it from the start."

A separate explanation posted by Justice Democrats, one of the political action committees, last year cast the arrangement as above-board. "The ONLY way to do work for multiple candidates legally at this scale is to create an LLC and act as a vendor," the group said.

The FEC complaint asserts that Chakrabarti established two PACs, the Brand New Congress PAC and Justice Democrats PAC, and then systematically transferred more than $885,000 in contributions received by those PACs to the Brand New Campaign LLC and the Brand New Congress LLC -- companies that, unlike PACs, are exempt from reporting all of their significant expenditures. The PACs claimed the payments were for "strategic consulting."

Although large financial transfers from PACs to LLCs are not necessarily improper, the complaint argues that the goal of the "extensive" scheme was seemingly to illegally dodge detailed legal reporting requirements of the Federal Election Campaign Act of 1971, which are designed to track campaign expenditures.

Critics said the arrangement appears unusual and should be probed.

"It sounds to a lot of people like that’s a way to skirt the campaign finance laws in this country," former Utah GOP Rep. Jason Chaffetz said on Fox News' "America's Newsroom." "And the FEC and the other regulators need to get in there and find out where was this money going – was it going to people’s pockets? Was it legitimate or not?”

AOC NOT RULING OUT AMAZON'S RETURN TO NYC

Some suggested the complaint could indicate hypocrisy from Democrats who have railed against “dark money” in politics. A video last month of Ocasio-Cortez firing off questions about dark money and campaign finance laws to experts during a congressional hearing has been viewed about 40 million times, reportedly making it the most watched political video posted on Twitter.

“Representative Ocasio-Cortez has been quite vocal in condemning so-called dark money, but her own campaign went to great lengths to avoid the sunlight of disclosure,” Tom Anderson, the director of NLPC’s Government Integrity Project, said in a statement.

“This is the very thing that hides a lot of money,” Chaffetz said of the arrangement outlined in the complaint.

An FEC spokesman declined to comment on the complaint on Tuesday.

“A provision of federal campaign finance law requires that any Commission action on an enforcement complaint be kept strictly confidential until the case is resolved,” spokesman Myles Martin told Fox News.

Fox News’ Gregg Re and Lillian LeCroy contributed to this report.