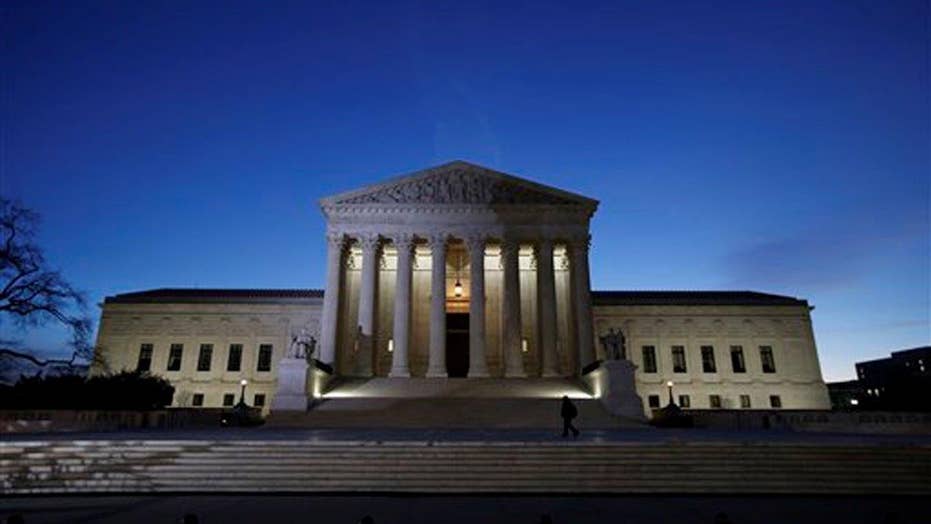 President Obama’s signature health care law once again is coming before the Supreme Court, this time in a case involving nuns who say the law’s contraception mandate violates their religious freedom rights.

The Little Sisters of the Poor, a Catholic nonprofit that cares for the elderly in need, will make their case before the Supreme Court -– and an equally divided bench -– on Wednesday during a 90-minute public session.

Falling in the middle of the election year, the session Wednesday will mark the fourth major high court review of the controversial Affordable Care Act.

At the heart of the case, the eight justices will decide whether religious-affiliated institutions like LSP deserve the same First Amendment protection that some for-profit corporations enjoy. Churches and other houses of worship also already are exempt from ObamaCare’s requirement to offer contraceptive coverage to employees.

Catholic groups like the LSP say signing the form amounts to tacit approval for such coverage and would force them "to choose between onerous penalties or becoming complicit in a grave moral wrong."

"The government demands that the Little Sisters of the Poor sign a permission slip for abortion drugs and contraceptives, or pay of millions in fines" for non-compliance, said Mark Rienzi, senior counsel for the Becket Fund for Religious Liberty, the group representing the nuns. "The sisters believe that doing that violates their faith, and that they shouldn't be forced to divert funds from the poor, elderly and dying people they've devoted their lives to serve."

In the early stages of the litigation, the Supreme Court issued a temporary order in January 2014, saying the administration could not enforce the mandates, at least temporarily. Some of the Little Sisters’ members have been wearing buttons inscribed with "I'll have nun of it!" to promote their case.

While the LSP leaders are nuns, the charity employs hundreds of lay workers who otherwise may be eligible for the insurance service. Similar nonprofits would include certain hospitals, parochial schools, and private faith-based universities.

The current election-year vacancy at the Supreme Court prompted by Justice Antonin Scalia's sudden death last month leaves this legal fight very much up in the air; the matter may not be fully resolved until his replacement joins the bench, something that may not happen perhaps for another year.

The ObamaCare policy at the center of the Supreme Court debate Wednesday was negotiated by the White House, which has described the third-party form as a compromise aimed at allowing the medical coverage but also providing an administrative workaround for those opposing it.

The Justice Department told the high court in legal briefs LSP has "always been eligible for an accommodation from the contraceptive coverage requirement."

"In our diverse and pluralistic nation, the right to the free exercise of religion does not encompass a right to insist that the government take measures that unduly restrict other persons, such as employees, in protecting their own interests, interests the law deems compelling," wrote administration lawyers.

At the same time, the White House insists the birth control coverage requirement is lawful, "essential to a woman's health," and that its rules struck the right balance.

"This is a case about paperwork, not religious liberty," said Cecile Richards, president of Planned Parenthood Federation of America.

The court already has taken up a similar issue pertaining to private companies.

The Supreme Court in 2014 ruled "closely held" for-profit corporations did not have to directly pay for their workers' contraception coverage. The 5-4 conservative majority concluded the federal Religious Freedom Restoration Act does apply to businesses like the retail giant Hobby Lobby and that the contraception mandate presents a "substantial burden."

Hobby Lobby's Christian family owners asserted their conscientious desire to operate in harmony with biblical principles while competing in a secular marketplace.

That two-year-old ruling and the current dispute have set off a frenzied partisan debate over religious and reproductive rights that will continue through the November congressional elections and beyond.

The high court in 2012 allowed ObamaCare to move ahead, saying the law's key funding mechanism -- the so-called "individual mandate" requiring most Americans to obtain health insurance or pay substantial financial penalties -- was constitutional.

Observers will watch Wednesday's oral arguments closely for clues to whether a crucial fifth vote exists to either uphold or strike the religious nonprofit provisions. A 4-4 split could leave the lower court rulings favoring the government in place for now, but establish no precedent for judges to address in similar future challenges.

Merrick Garland, the federal judge nominated last week by President Obama to replace Scalia, will have no involvement at this stage of the Little Sisters petition.