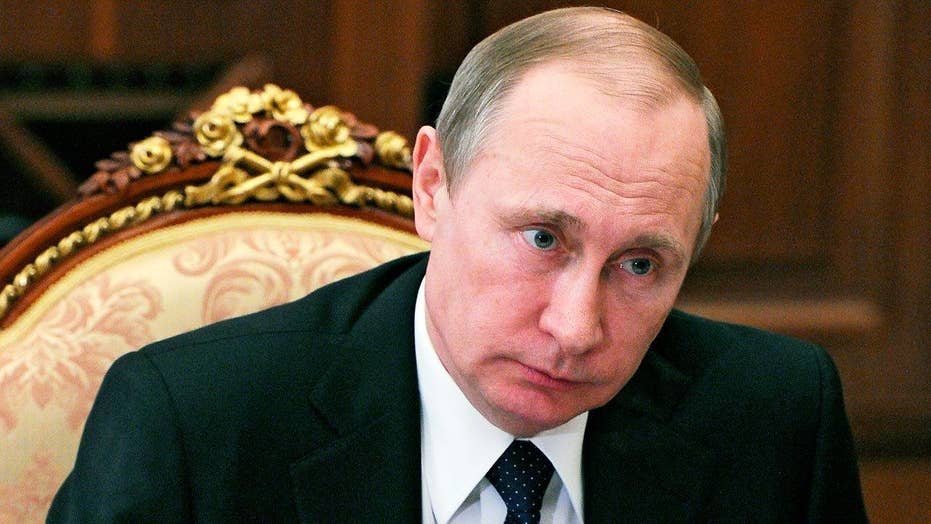 What message is Putin sending by boycotting nuclear summit?

Insight from Mark Dubowitz, executive director at The Foundation for Defense of Democracies

Addressing the last nuclear security summit of his administration, President Obama warned that despite measurably reducing the risk of a devastating attack, the prospect of a terror group like the Islamic State obtaining nuclear weapons is “one of the greatest threats to global security.”

“There is no doubt that if these mad men ever got their hands on a nuclear bomb or nuclear material, they would certainly use it to kill as many people as possible,” the president said, opening the last day of the international summit in Washington on Friday.

Though Obama was determined to end the summit on a hopeful note, discussions among the dozens of world leaders that took place Friday were focused on Islamic terrorism, which followed Thursday’s conversations about the growing threat of North Korea’s nuclear weapons program.

Obama also used the controversial deal with Iran to promote a "carrot and stick" approach to nuclear diplomacy, saying that while it has not swept away all of the other issues the U.S. and other nations still have with Iran, it’s been an effective way to address the narrower issue of nuclear proliferation with Iran.

“This is a success of diplomacy that hopefully we will be able to copy in the future,” he said.

Meanwhile, the U.S. and Japan are pledging to remove highly enriched uranium from a Japanese research reactor to reduce the risk of theft and nuclear terrorism. Fuel from the Kyoto University Critical Assembly will be sent to the United States to be down-blended, and the reactor converted to use low-enriched uranium instead. The allies made the announcement Friday.

Their statement does not say when this process would be complete. Japanese media reports that more than 300 kilograms of plutonium is en route to the Savannah River Site, a federal government facility, despite objections from South Carolina governor Nikki Haley.

This is just one thread in an overall concern about the accessibility of bomb-making material across the globe.

The International Panel on Fissile Material stated last year that the stockpile of accessible fissile material such as highly enriched uranium and separated plutonium remains around 1700 metric tons. What worries security officials is the lack of oversight and utter insecurity of many of these stockpiles, and the potential of “dirty bombs” in the world’s most insecure places.

“It is plausible that certain (terrorist) organisations could attack transports of nuclear material or civilian installations and try to steal radioactive material,” said Benjamin Hautecouverture, a senior fellow at Foundation for Strategic Research in France.

“There is a black market where such material is available coming from central and eastern Europe.”

The absence of nuclear states like Russia at the summit this week underscore the reality that not all governments are on the same page on this issue.

The White House called the absence of Russian President Vladimir Putin a “missed opportunity.” Russia’s stockpile is only rivaled by the U.S. nuclear arsenal. Moscow consequently, has scoffed at the Washington summit, complaining that the U.S. wanted merely to control the process and take power away from international agencies.

Nawaz Sharif, prime minister of Pakistan, another nuclear state, canceled his trip to the event following an Easter Sunday bombing that killed 72 people in Lahore. Pakistan is reported to have a nuclear stockpile of roughly 120 weapons, making it one of the most nuclear-equipped states in the world.

Furthermore, Obama stated that Latin America and the Caribbean are now “free of highly enriched uranium.”

The White House also praised Argentina’s commitment to converting the rest of its stockpile of radioactive material into a less dangerous material. Since the 1980’s, Argentina has cooperated with American authorities to dispose of its uranium stockpile.

With the removal process now complete, the White House has stated that no Latin American state possesses more than one kilogram of highly enriched uranium, labeling Latin American and the Caribbean as a “region free of the material.”

That does not include North America, though according to newly declassified data, the amount of highly enriched uranium held by the U.S. government is dropping.

Statistics indicate its own national inventory of the material has dropped from 741 metric tons two decades ago to 586 metric tons as of 2013.

Despite all of the good news, less than half of the governments attending the summit agreed to secure their radioactive sources – mainly those available in academic institutions and in research hospitals.

In another session with the leaders of Japan and South Korea, he called for vigorous implementation of stepped-up U.SN. sanctions. In January, North Korea reportedly detonated its fourth nuclear bomb.