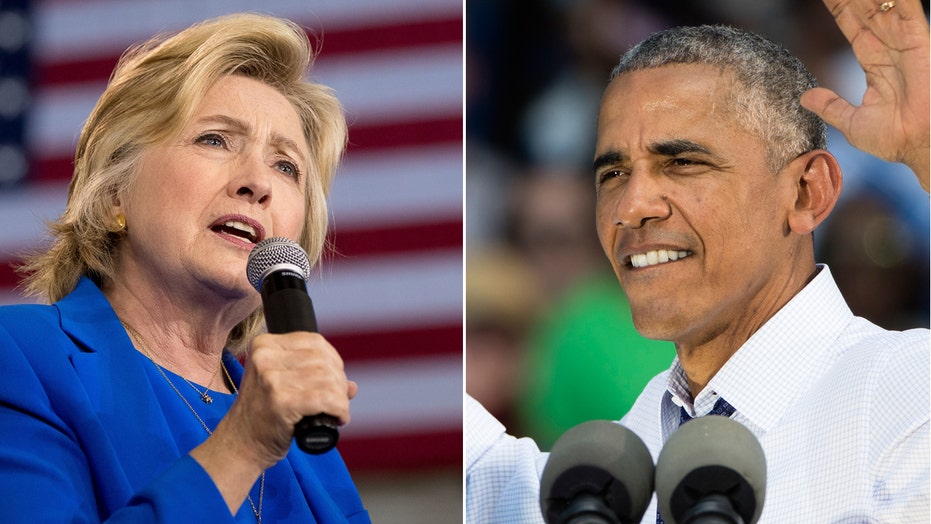 President Obama is at his highest approval rating since his 2009, but can that help Hillary Clinton? Or do his numbers not matter all that much to her election? Chris Stirewalt explains it all in just 60 seconds.

WASHINGTON – President Barack Obama said Saturday night he will take it as a "personal insult" if the African-American community fails to turn out for the presidential election and encouraged black voters to support Democratic candidate Hillary Clinton.

Obama delivered his final keynote address to the Congressional Black Caucus Foundation, symbolically passing the torch to the person he hopes will succeed him next year. Clinton, his former secretary of state, was honored for becoming the first female presidential nominee of a major party.

Obama said his name may not be on the ballot, but issues of importance to the black community were, including justice, good schools and ending mass incarceration.

"I will consider it a personal insult, an insult to my legacy if this community lets down its guard and fails to activate itself in this election," Obama said with a stern look and booming passion. "You want to give me a good send-off, go vote."

In her own pitch to African-Americans at the same dinner, Clinton implored the crowd to help protect Obama's legacy, warning of a "dangerous and divisive vision" that could come from Republican opponent Donald Trump.

Obama joked about the "birther" issue long promoted and now dismissed by Trump, telling his audience that there's an extra spring in his step now that the "whole birther thing is over." But his main message was about voter turnout among blacks.

He turned quite serious when speaking about voting. He said Republicans have actively added barriers to voting by closing polling places mostly in minority communities, cutting early voting and imposing more voter ID requirements. He called the efforts a national scandal, but even if all restrictions on voting were eliminated, African-Americans would still have one of the lowest voting rates.

"That's not good. That is on us," Obama said. He then told the crowd if they wanted to give Michelle Obama and him a good send-off, "don't just watch us walk off into the sunset, now. Get people registered to vote."

Obama also sought to blunt Trump's recent efforts to reach out to black voters, saying Trump at one point in the race had said there's never been a worse time to be a black person.

"I mean, he missed that whole civics lesson about slavery and Jim Crow, but we've got a museum for him to visit," Obama said, a reference to next week's opening of the National Museum of African American History and Culture. "We will educate him."

Obama may have been referring to an ABC interview with Trump in 2015 when he asserted the nation's first black president had done "nothing" for African-Americans. "They are worse now than just about ever," he said.

Clinton gave a shorter address. She did not mention Trump by name but showered the president with praise and said the upcoming election would be a pivotal choice for the country.

"It's not about golf course promotions or birth certificates. It comes down to who will fight for the forgotten, who will invest in our children and who will really have your back in the White House," Clinton said.

"We need ideas not insults, real plans to help struggling Americans in communities that have been left out and left behind, not prejudice and paranoia. We can't let Barack Obama's legacy fall into the hands of someone who doesn't understand that, whose dangerous and divisive vision for our country will drag us backwards," she said.

The gala featuring nearly four dozen black members of Congress underscored Clinton's need for a large turnout of black voters against Trump. In a tight presidential race, Clinton is hoping that African-Americans turn out like they did for Obama's two victories when they comprised 13 percent of the electorate.

Black voters were among Clinton's most loyal supporters during the Democratic primaries, powering her to a series of wins in the South that helped her build a delegate lead against Vermont Sen. Bernie Sanders.

The dinner included warnings about a Trump presidency. Retiring Rep. Charles Rangel, D-N.Y., who was honored for his service, said of the GOP nominee, "His hatred and his bigotry has pulled the rug off and the sheet off the Republican Party so we can see it for what it is."