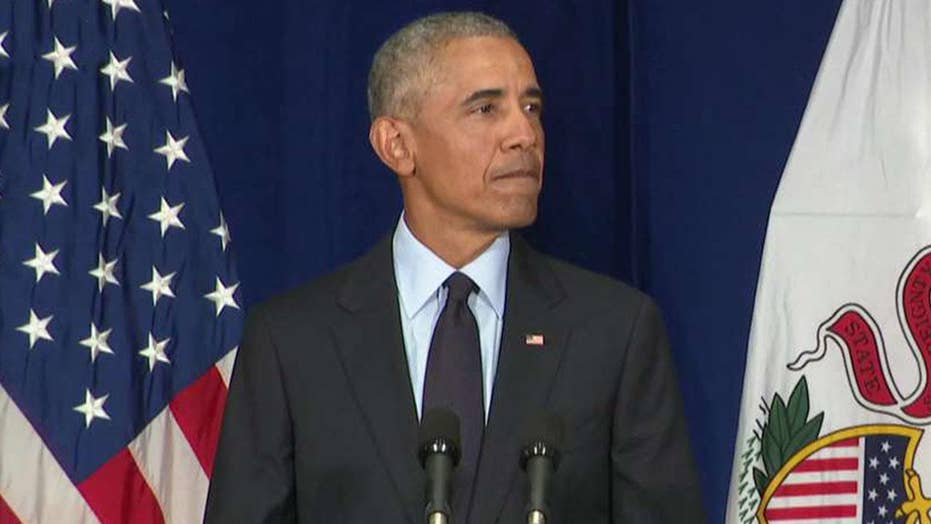 Obama: Neither party has a monopoly on wisdom

Obama says President Trump is capitalizing on the resentment politicians have been pushing for years.

Former President Barack Obama launched his return to the campaign trail Friday with a fiery speech accusing President Trump and the GOP of fueling "division and resentment" -- but the sitting president responded with a yawn.

At a rally later in the day in Sioux Falls, South Dakota for gubernatorial candidate Rep. Kristi Noem, he told supporters: "President Obama made a speech, now if that doesn't get you out to vote for the midterms, nothing will."

The back-and-forth between the sitting and former presidents sets the stage for a battle of the mega-surrogates heading into the November midterms. Trump has promised to ramp up his campaign appearances for GOP candidates and, with Obama flexing his political muscle once again, he will have a worthy competitor.

Obama's campaign season debut launches his midterm effort to rally Democrats to the polls and end Republicans' grip on power in Congress. The former president warned Friday that the stakes are high and the consequences of staying on the sidelines “dire.”

Delivering some of his toughest broadsides against the GOP since leaving office – and referring to Trump by name, something he used to avoid – Obama said there are certain "powerful and privileged" people who want to "keep us angry."

“It did not start with Donald Trump,” Obama said. “He is a symptom, not the cause. He’s just capitalizing on resentments that politicians have been fanning for years.”

But speaking in Fargo, Trump dismissed Obama's speech and mocked his claim that Trump was taking credit for a booming economy that started during the prior administration.

"I think he was trying to take credit for this incredible thing happening to our country," he said. "I have to say to President Obama, it wasn't him, and if the Democrats got in with their agenda ... instead of having 4.2 [percent GDP growth] up, you have 4.2 down, you'd be in negative numbers."

He said that Obama had overseen the "weakest recovery in the history of our country."

"This is called not a recovery, but a rocket ship," he said in reference to the economy under his watch, as he touted his achievements. He also warned voters that Democrats "would destroy Medicare and destroy Social Security," two things he said that Republicans would protect.

"Isn't this more exciting than listening to President Obama?" he later asked his crowd.

The presidential sniping foreshadowed a fight that is likely to increasingly play out as both presidents rally their parties. Trump stumped in Montana Thursday night and will head to South Dakota after his appearance in Fargo.

The Obama speech was a preview of the argument Obama is likely to make throughout the fall. On Saturday, the former president will stump for House Democratic candidates from California at an event in Orange County, a conservative-leaning part of California where Republicans are at risk of losing several congressional seats.

Next week, Obama plans to campaign in Ohio for Richard Cordray, the Democratic nominee for governor, and Ohio Democrats.

In Illinois, Obama repeatedly argued that Republicans have reversed course in the Trump era on several issues, from the deficit to Russia.

“What happened to the Republican Party?” he said. “Its central organizing principle in foreign policy was the fight against communism, and now they’re cozying up to the former head of the KBG.”

He also referenced the anonymous New York Times op-ed and said of the claim staffers are secretly working to keep Trump in line, “That’s not how our democracy is supposed to work."

“These people aren’t elected, they aren’t accountable, they’re not doing us a service by actively promoting 90 percent of the crazy stuff that’s coming out of this White House and then saying, ‘don’t worry, we’re preventing the other 10 percent.’”

Obama admitted that “neither party has been exclusively responsible for us going backwards instead of forwards” – citing southern Democrats who vociferously defended slavery – but said Republicans have traded a conservative vision for the country for one that’s more “radical” in more recent times.

“I’m here to deliver a simple message, and that is: you need to vote because our democracy depends on it,” Obama said.

Hitting the campaign trail for other candidates isn’t common for the former president. Since leaving the White House, he has only made occasional appearances on behalf of candidates, usually opting instead to issue endorsements. He recently endorsed 81 Democrats up and down the ballot in 13 different states; a second wave of endorsements is expected this fall.

While many Democrats have been clamoring for Obama to have a greater presence, advisers said he has taken a more low-key role in part to create room for a new generation of party leaders to step up. He's also said to be acutely aware that he does not have a strong track record in helping Democrats win in years when he's not on the ballot, and that his presence can have the effect of energizing Republicans, according to the adviser.

The former president's three priorities are to help Democrats take back control of the House, help his party win seats in the Senate and support state-level candidates in order to influence the redistricting process for future congressional races.

Former first lady Michelle Obama, too, is hitting the campaign trail hard for the midterm elections. She is headlining voter registration rallies in Las Vegas and Miami later this month during a week of action by a new, nonpartisan organization, When We All Vote, which she co-chairs.

She has long been one of the most popular draws among Democrats, but it remains an open question whether she will campaign for any Democratic candidates. She has kept a low profile since leaving the White House in January 2017, limiting her political commitment for now to helping When We Vote.