Three days after teams of Islamic State terrorists brazenly carried out raids across Paris that left 129 people dead, President Obama labeled the slaughter a "setback" in responding to questions about his policies.

"There will be setbacks and there will be successes. The terrible events in Paris were obviously a terrible and sickening setback," Obama said Monday.

The president spoke at a contentious and lengthy press conference on the sidelines of the G20 summit in Turkey, as he faces tough criticism from Capitol Hill -- for saying the morning before the attack that ISIS had been "contained" in Iraq and Syria, and for sustaining a military strategy that critics deem insufficient.

But Obama on Monday stuck by the U.S. strategy for fighting the terror group while defending his earlier remarks.

The president said the ultimate goal is to "degrade and ultimately destroy this barbaric terrorist organization." But he insisted that the reason he said they're contained, hours before terror teams launched deadly raids across Paris, is because "they control less territory than they did last year."

Obama stressed that going after ISIS in Iraq and Syria will help reduce the threat from foreign fighters, while acknowledging it "will not be enough to defeat ISIL in Syria and Iraq alone."

Obama also defended the current strategy -- which involves airstrikes and a limited number of military advisers on the ground.

He said, "It will take time." And he insisted that the U.S. has not "underestimated" the ISIS threat.

"ISIL leaders will have no safe haven anywhere," Obama vowed.

He spoke as lawmakers in Washington stepped up their criticism of Obama's approach.

"This is war. This is massive savagery on the part of ISIS," Rep. Peter King, R-N.Y., told Fox News on Monday. "We have to show much more of an intensity."

Sen. John McCain, R-Ariz., told MSNBC "frankly I'm not overwhelmed with 20 airstrikes by the French," while Sen. Lindsey Graham, R-S.C., said "if we just drop a few bombs on these guys and that's it, they'll be stronger than ever."

World leaders vowed earlier Monday in Turkey to boost intelligence-sharing, cut off terrorist funding and strengthen border security in Europe, as they sought to show resolve and unity following the deadly terror attacks in Paris.

"We agreed that the challenge can't just be tackled with military mean, but only a multitude of measures," German Chancellor Angela Merkel said.

The leaders of the Group of 20 rich and developing nations were wrapping up their two-day summit in Turkey against the backdrop of heavy French bombardment of the Islamic State's stronghold in Syria. The U.S. was expanding its intelligence sharing with the French and helping them identify targets, according to American officials.

Numerous meetings about next steps in Syria and the Islamic State campaign were being held on the sidelines of the summit in the Turkish seaside resort of Antalya.

Meanwhile, Republicans' 2012 presidential nominee, Mitt Romney, published an op-ed in The Washington Post saying "now is the time, not merely to contain the Islamic State, but to eradicate it once and for all."

"We must wage the war to defeat the enemy, not merely to harass it. For over a year, the president has clung to the hope that an air campaign is sufficient. It demonstrably is not," he said, saying the administration must be willing to devote "whatever resources are required to win - even boots on the ground." 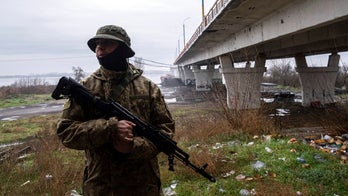