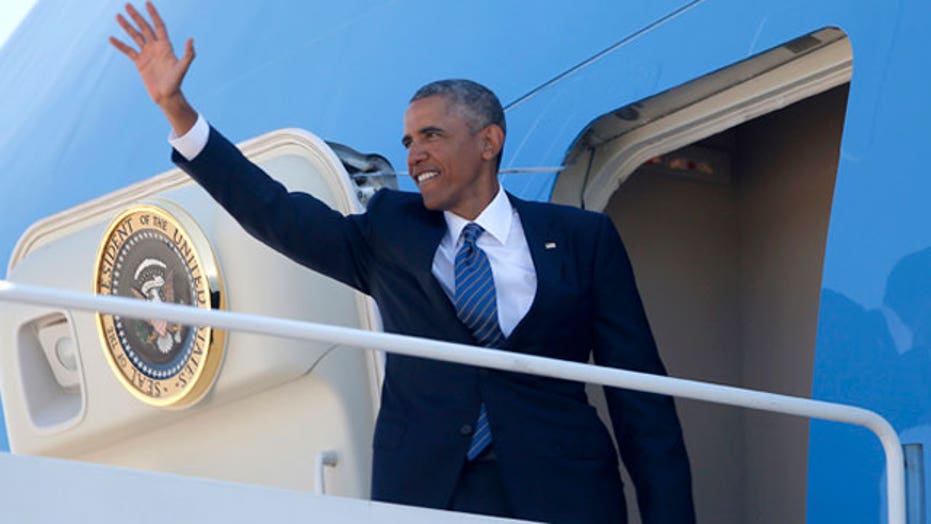 President Obama embarks on 6-state tour ahead of midterms

After months of limiting his campaigning to party fund-raising, President Obama -- in the final days before midterm elections -- is breaking out of Washington to crisscross the country in a late-stage campaign sprint, even as some Democrats still are sprinting the other way.

The president is hoping that, despite a job approval rating that stands at 42 percent, the power of the presidency and his own personal charisma may be enough to sway some of the closer congressional and statehouse battles.

The president and his aides for weeks have battled claims that Obama is a political liability for his party. To the chagrin of vulnerable Democrats, Obama last week even pronounced that Democrats avoiding him "are all folks who vote with me" and "have supported my agenda."

But the president, no doubt mindful that a photo op with him can be used as a weapon by Republicans in tight races, nevertheless is playing it safe as he hits the trail.

The president's schedule for the next several days will take him through six Obama-friendly states he won in the 2012 elections. And he's largely staying away from contentious Senate races, opting instead to make appearances in support of gubernatorial candidates.

His first stop, on Tuesday, was in Wisconsin, where Democrats once again are trying to unseat Republican Gov. Scott Walker.

Obama headlined a rally at a Milwaukee high school for Mary Burke, the Democrat trying to oust Walker. Defeating Walker, a potential 2016 presidential contender, would be a major coup for Democrats.

At the rally, Obama urged voters to back Democrats like Burke because they put the middle class before politics. He added that Republicans love the U.S. but have bad ideas.

From Wisconsin, Obama plans to travel to Maine, Rhode Island, Michigan, Pennsylvania and Connecticut to boost Democrats running for governor. The only Senate candidate he plans to appear with is Rep. Gary Peters in Michigan. Obama made his first appearances on the 2014 campaign trail just over a week ago, rallying for gubernatorial candidates in Illinois and Maryland.

The president has been a rare sight on the campaign trail this year, where his low approval ratings make him a potential liability for his party.

The Republican National Committee, underscoring that concern, put out a web ad Monday titled, "Obama's foreign policy is on the ballot." That's a riff on Obama saying several weeks ago that "every single one" of his policies is on this year's ballot. The comment quickly became fodder for GOP ads.

Several Democrats have made a point of distancing themselves from the president and his policies. A few, including Kentucky Senate candidate Alison Lundergan Grimes, have refused to say whether they even voted for him.

Earnest, though, pushed back on the notion that Obama has outright avoided Democratic senators.

"There are a number of Democratic senators with whom the president has appeared," Earnest said.

He cited the example of an event with Minnesota's Al Franken, while acknowledging that was not campaign-oriented. Earnest stressed that the president nevertheless is spending "a lot of time raising money for" Democratic candidates.

In states like Wisconsin, Democrats still are hoping high turnout among die-hard Obama supporters will put them over the top in hard-fought races for governor.

Republicans, too, are trying to use Obama's efforts to drive up turnout and enthusiasm among their own supporters. In a fundraising pitch on Tuesday, Walker said the presidential visit showed Burke's campaign was being powered by the Obamas, the Clintons and special interests in Washington.

"President Obama is coming to Wisconsin to campaign for my defeat," Walker said. "I expected it. In fact, I'm wondering what took him so long."

Polls show the Wisconsin race is deadlocked between Walker and Burke, with very few voters undecided. Obama won Wisconsin in 2008 and 2012.