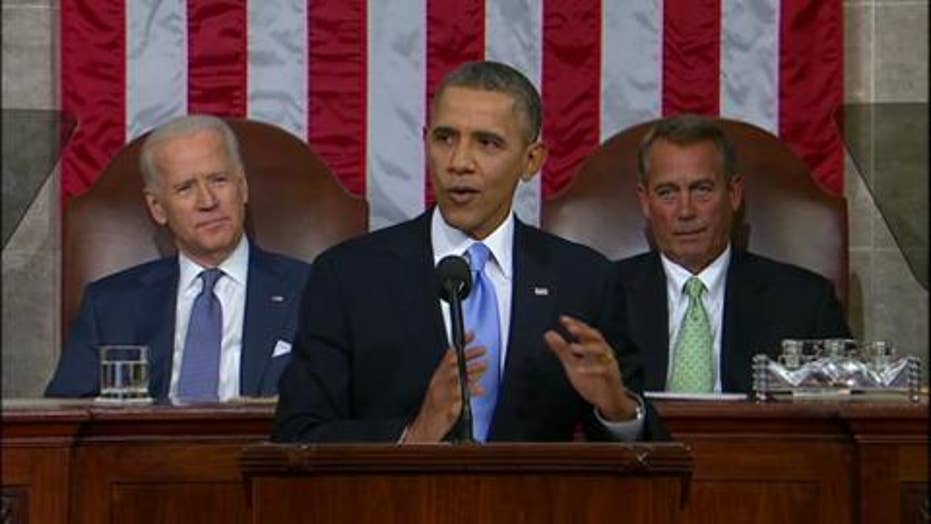 Three years ago, President Obama closed his 2011 State of the Union address by declaring: "We do big things."

Today, however, it's Obama's struggle to push forward on the "big things" -- including tax reform, entitlement reform and gun legislation -- and a vexingly brittle relationship with Congress that threatens to curb his second term ambitions.

His annual address on Tuesday gave only passing mention to big-ticket legislative goals. Obama is instead vowing to use his executive powers to take what could only be described as modest steps in 2014 on the economy and education.

"I didn't hear any new ideas, that's for sure," Rep. Paul Ryan, R-Wis., told Fox News after the address.

The speech reflected the frustrated state of Obama's presidency in his second term. After enjoying the benefits for two years of a Democratic majority in Congress -- which he used to pass the health care law, the stimulus and other major bills -- a more Republican-dominated Capitol Hill continues to stymie Obama's wish list in his second term.

Gun control was a focus of last year's address in the wake of the Sandy Hook mass shooting, but the president could not sway Congress to back a bill tightening background checks. Last year's lofty talk of tax and entitlement reform also came back to earth, giving way in recent weeks to a more basic two-year budget deal.

Immigration legislation remains on the table, but Obama is now waiting on House Republicans to pitch their plan.

But instead of offering new proposals to Congress Tuesday night, Obama vowed to set out on his own to chip away at his agenda items via executive action.

"Some of my ideas, I'll need Congress, but Americans can't just stand still if Congress isn't doing anything," Obama said Wednesday during a stop at a Costco in suburban Maryland. "I'm not going to stand still either. Wherever I can take steps to expand opportunities for more families, I'm going to do it, with or without Congress."

The president spoke later at a steel plant near Pittsburgh -- to pitch a new retirement savings plan and talk about wages.

Treasury Secretary Jacob Lew was on hand at the U.S. Steel Corp. plant in West Mifflin, Pa., as Obama directed the Treasury to create a new savings program geared toward those whose employers don't offer retirement plans -- about half of all U.S. workers, according to the White House.

The idea is to offer a "starter" account to let people start saving even if they can't afford the large initial investment often needed for a private, commercial retirement account. Savers can start with just $25, and could opt to have contributions of as low as $5 deducted automatically from their paychecks.

Dubbed "myRA," the program will operate like a Roth IRA, so contributions to the plan will be made with after-tax dollars. That means account-holders could withdraw the funds at any time without paying additional taxes. The funds would be backed by U.S. government debt, similar to a savings option available to federal employees.

Initially a pilot program, the accounts should be available through some employers by the end of 2014, the White House said. Investors can keep the accounts if they switch jobs or convert them into private accounts.

Obama is also preparing to sign an executive order raising the minimum wage for workers carrying out new federal contracts to $10.10, up from the current $7.25. Although the measure will only help a limited number of people, it's intended to boost Obama's repeated call for Congress to raise the federal minimum wage for all workers to $10.10.

The stop at a Costco in Lanham, Md ., also gave Obama an opportunity to highlight efforts that many states are undertaking to try to improve wages for their workers. Maryland's Democratic governor is pushing to raise the state's minimum wage to $10.10.

On Thursday, Obama will visit a General Electric gas engines facility in Waukesha, Wis., not far from Milwaukee. He'll also speak at a high school in Nashville, Tenn.

Speaking on Fox News, Democratic Rep. Chris Van Hollen acknowledged that at this stage, "speeches aren't going to change [the] outcome of policy."

The Maryland congressman stressed the struggles the president is having with lawmakers.

"The president would like Congress to work with him to pass a national minimum wage," he said. "He understands he can't do that by himself as president, but he does understand as chief executive, when it comes to the federal government procuring goods and services he can allow federal government to lead by example and say if you want to do business with the federal government, at least pay employees a wage that allows them to stay out of poverty if they've got a couple kids."