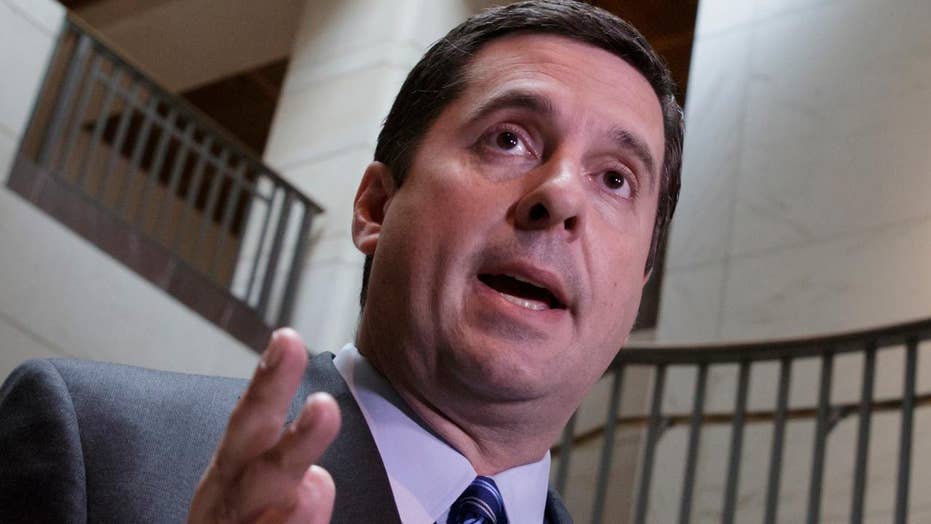 A key lawmaker who went public this week with charges the Obama administration collected and spread information from surveillance of President Trump’s transition team said Friday documents he's been shown "concerned me."

“There’s some information in those documents that concerned me and I don’t think belonged in there,” House Intelligence Committee Chairman Devin Nunes, R-Calif., told reporters at a press conference.

He reasserted that it seemed that the information was still collected legally, and also expressed concern about the decision to unmask names.

By law, Americans caught incidentally during surveillance of foreign targets must be protected by having their names "masked." Nunes said more than one American - and possibly Trump - had their names "unmasked" and their names and information were widely distributed within the intelligence community.

“It appears like this was all legal survillance from what I can tell,” he said, but later added: “You have to ask why were names unmasked.

"Maybe someone has a good reason for it but not from what I've been able to read," he said.

Nunes said NSA Director Mike Rogers has been "highly cooperative" with his committee and could turn over documents, possibly transcripts of surveilled conversations, Friday or sometime next week.

Nunes did not say how many names were unmasked.

"There was additional unmasking that was done in the documents I read the other day. I don't know who asked for them to be unmasked, i just know there are more," he said, although he said he knew about the unmasking before he read the documents.

He re-emphasized, however, that President Trump’s claims that Obama had Trump Tower wiretapped, appeared unfounded.

“There was no wiretapping of Trump Tower -- that didn’t happen,” he said.

Nunes dropped a midweek bombshell when he told reporters Wednesday that he had seen information showing that communications by Trump transition officials had been picked up via “incidental collection” – meaning they had been picked up as security agencies had been monitoring other targets.

Nunes said while the information had been obtained legally, he added that it showed that communications were then widely disseminated in an improper manner during the last days of the administration.

He also told reporters that former Trump campaign chairman Paul Manafort had volunteered to be interviewed by the committee.

REP. NUNES: 'I HAD A DUTY AND OBLIGATION' TO TELL TRUMP OF SURVEILLANCE INTEL

Manafort acknowledged this week that he had worked for a Russian billionaire about a decade ago, but he denied an Associated Press report suggesting the lobbying efforts served Russian political interests.

Manafort resigned from the Trump team in August after it was revealed he had previously worked for the pro-Russian party of ex-Ukraine President Viktor Yanukovych.

But Nunes warned about reading too much into it, and emphasized that Manafort had volunteered to be interviewed. As for other people mentioned in press reports, Nunes warned against that.

“We’re not going to get into neo-McCarthyism era where we just start bringing in Americans just because they were mentioned in a press story,” he said.

Trump's initial National Security Adviser, Lt. Gen. Mike Flynn, was forced to resign after information leaked to the press showed he had been in contact with the Russian ambassador, who was under surveillance.