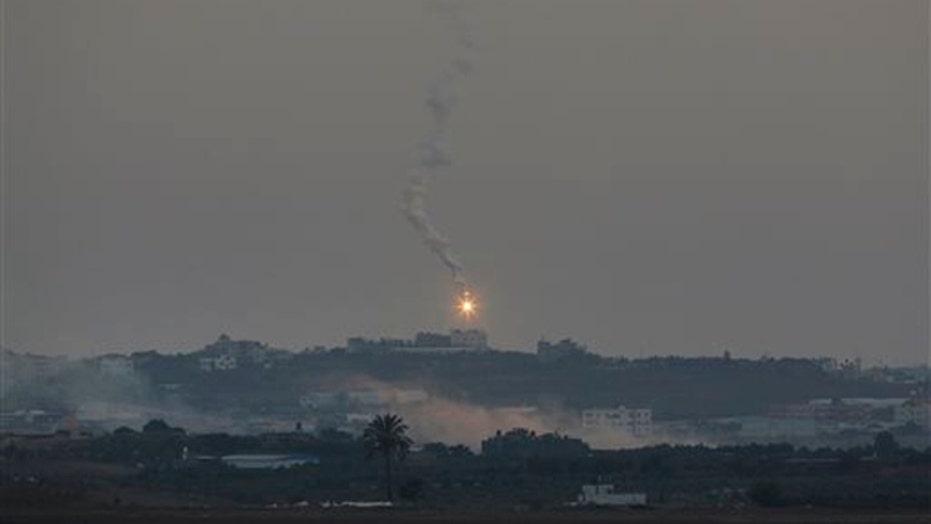 Israeli Prime Minister Benjamin Netanyahu said Sunday he will use “any means necessary” to stop Islamic militant group Hamas from bombing civilians but declined to say when his military action will stop or whether he will continue using ground troops.

Netanyahu said on “Fox News Sunday” that his objective was to reach “sustained quiet” and that he’ll continue “until it’s achieved.”

The prime minister spoke as Israeli ground troops moved into the Gaza Strip early Sunday for the first time in the increasing bloody battle with Palestinians, sparked by the recent killings of three Israeli teens, then the apparent revenge killing of an Arab Palestinian youth.

The troop movement also has prompted concerns about whether the Gaza attack, the first such since 2009, will result in a full-scale ground war.

The week-long dispute until Sunday has been limited to Hamas rocket attacks and Israeli rocket and airstrikes that have killed an estimated 160 Palestinians, in a decades-long battle between both sides in Israel.

Palestinian militants have launched more than 800 rockets at Israel, including 130 in the last 24 hours, the Israeli military said Sunday.

Several Israelis have been wounded, but there have been no fatalities.

“We cannot accept that and will take the necessary action to stop it,” said Netanyahu, who declined to get into specifics. “We’ll do what any country would do."

He also apologized for the civilian casualties but blamed Hamas for trying to use residents as human shields.

He suggested a foray into Gaza to eliminate Hamas creates too much risk for a high number of civilian casualties, which could result in international opposition.

“I’m not sure what you would achieve,” Ross said.

Meanwhile, Iranian Foreign Minister Mohammad Javad Zarif on Sunday criticized the United States for not condemning Israel’s attacks, which he described as a “slaughter” on “men, women and children.”

“We don’t see any move by the United States to condemn this,” he told NBC’s “Meet the Press.”

Neither Israel nor Palestinian militants show signs of agreeing to a cease-fire to end their week-long conflict, despite calls by the United Nations Security Council and others that they lay down their arms.

With Israel massing tanks and soldiers at Gaza's borders, some fear the latest Israeli threats could signal a wider ground offensive that would bring even heavier casualties than the Palestinian deaths already registered.

Early Sunday, Israeli naval commandos launched the brief raid into northern Gaza to destroy what the military described as a rocket-launching site, an operation it said left four of its soldiers slightly wounded.

The Israeli Air Force later dropped leaflets warning residents to evacuate their homes ahead of what Israel's military spokesman described as a "short and temporary" campaign against northern Gaza, home to at least 100,000 people.