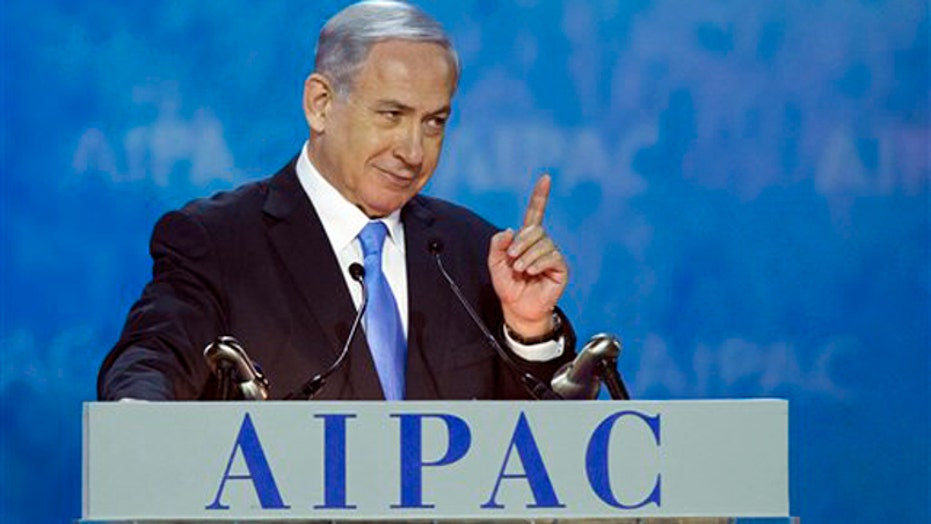 Are US-Israel relations at stake in Israeli prime minister's controversial address before Congress?

From the White House to Capitol Hill, anticipation was mounting Tuesday over Israeli Prime Minister Benjamin Netanyahu's address to Congress which he plans to use to make his case against a pending nuclear deal with Iran.

The prime minister, who previewed his speech a day earlier during remarks to the pro-Israel lobby, warns that the potential agreement would leave his country at risk. His address is his highest-profile bid yet to oppose the talks, and has led to a political firestorm in Washington.

Dozens of Democrats plan to boycott Netanyahu's address. But House Speaker John Boehner’s office, which invited the Israeli leader to give the address, says the demand for tickets is still "unprecedented, and has far outweighed their availability."

Demand for tickets remains so high that both the House and Senate have set up alternative viewing locations, according to Boehner’s office.

Amid the controversy, the speaker released a video Tuesday morning saying the Israeli leader would deliver "an important message at an important time."

Israeli officials told Fox News the prime minister's address will focus specifically on "the content" of the provisional deal that the P5+1 negotiators are struggling to finalize with the Iranians in Switzerland -- and the Israelis also expect, fairly or not, for senior Obama administration officials to denounce Netanyahu for improperly disclosing sensitive or even classified material relating to the terms under negotiation.

The Israeli officials stress that if one reads the prime minister's address carefully, though, it will be impossible to identify anything that hasn't been discussed publicly.

The Israeli delegation is also responding to remarks that White House National Security Adviser Susan Rice delivered Monday night, where she urged Congress to reject Israel's argument that the final accord must strip Iran of its entire uranium enrichment capability. Rice had called such a negotiating posture "unrealistic," adding that the Iranians "cannot unlearn" the technology.

But one Israeli official told Fox News, "If you separate a team of nuclear scientists from their equipment, they cannot spin themselves to enrich uranium."

Netanyahu warned Monday in a speech to The American Israel Public Affairs Committee in Washington that a potential nuclear deal with Iran "could threaten the survival of Israel."

As he kicked off his contentious visit to the United States, the Israeli leader underscored the dangers he said are posed by Iran, which he called the world's "foremost sponsor of state terrorism."

"Iran envelops the entire world with its tentacles of terror," he said, displaying a map showing various connections between Iran and terror groups. He warned Iran could pursue Israel's destruction if it obtained a nuclear weapon.

"We must not let that happen," Netanyahu said.

Both the Obama and Netanyahu administrations, as a matter of policy, agree that Iran must not be able to obtain a nuclear weapon. But the Israeli leader has concerns that the framework of the current diplomatic talks could lead to an ineffective deal.

President Obama, speaking in an interview Monday night with Reuters on the eve of Netanyahu’s speech to Congress, acknowledged the shared goal, then added Netanyahu “thinks that the best way to do that is either through doubling down on more sanctions or through military action, ensuring that Iran has absolutely no enrichment capabilities whatsoever…

“What we've said from the start is by organizing a strong sanctions regime, what we can do is bring Iran to the table.”

He added, “there’s no good reason for us not to let the negotiations play themselves out.”

Despite Obama saying he believed Netanyahu was “sincere about his concerns with respect to Iran,” the Israeli leader’s address to Congress on Tuesday has become the source of immense tension between the two governments.

The speech was arranged at the invitation of Boehner, but without the president’s involvement.

Obama has no plans to meet with the prime minister -- although the White House insists this is out of a desire not to appear to be influencing upcoming Israeli elections.

Sen. John McCain, R-Ariz., told Fox News on Monday this is the "worst" he's ever seen the U.S.-Israel relationship. He claimed critics are acting "in such a hysterical fashion" because they're concerned Netanyahu will make a "compelling argument" against the pending Iran agreement.

Netanyahu, though, stressed Monday that the alliance is "stronger than ever" despite the current disagreement, as he gently mocked the recent media coverage.

"Never has so much been written about a speech that hasn't been given," he said. Netanyahu also said he meant no "disrespect" to Obama or his office in agreeing to address Congress. He said he "deeply" appreciates all Obama has done for Israel and did not intend to "inject Israel into the American partisan debate."

But he said he had a "moral obligation" to speak up about the dangers Israel faces, and stressed that these dangers are, for his country, a matter of "survival."

Power, who spoke Monday morning, tried to ease tensions and offer assurances of the strength of the U.S.-Israel relationship. She said that partnership "transcends politics" and always will.

She also stressed that diplomacy with Iran is the "preferred route" but the U.S. will keep its security commitments.

Rice, speaking Monday night, said the U.S. was seeking a deal that would cut off "every single pathway" Iran has to producing a nuclear weapon,” adding that Obama keeps all options on the table for blocking Tehran's pursuit of a bomb and declaring that "a bad deal is worse than no deal."

Still, Rice warned against holding out for "unachievable" outcomes, such as getting Iran to fully end domestic enrichment.

"As desirable as that would be, it is neither realistic or achievable," she said. "If that is our goal, our partners will abandon us."

Netanyahu considers unacceptable any deal that does not entirely end Iran's nuclear program. But Obama is willing to leave some nuclear activity intact, backed by safeguards that Iran is not trying to develop a weapon. Iran insists its program is solely for peaceful energy and medical research.

White House Press Secretary Josh Earnest on Monday afternoon again touted the U.S.-Israel bond, and stressed that options remain on the table -- including a military option -- if Iran does not comply with any nuclear agreement.

He continued to give the chances for a deal a "50-50" shot, citing lingering questions over whether Iran's political leadership would sign off on one.