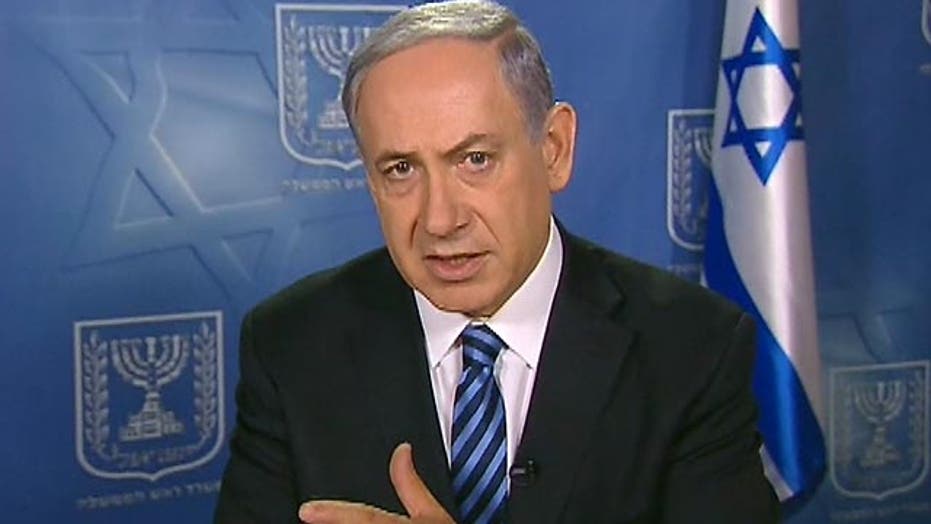 Netanyahu: Hamas is 'bent on escalation'

Israeli Prime Minister Benjamin Netanyahu repeatedly blamed Hamas on Monday for the rising death toll in their conflict, saying the militant group is trying to create more casualties by using civilians as human shields and downplaying concerns that images of the carnage could sway international support.

The battle between Israeli forces and Palestinian-backed Hamas is entering its third week, sparked by the kidnapping and killing of three Israeli teens, then the apparent revenge murder of a Palestinian youth.

A reported 566 Palestinians and 27 Israelis have been killed since the fighting started July 8.

Secretary of State John Kerry returned to Egypt Monday to join diplomatic efforts to get both sides to accept a cease-fire agreement.

Asked about the possibility of peace, Netanyahu said, "in the Middle East it takes two to tango, sometimes three, maybe four."

Barghouti argued that Kerry being caught Sunday on an open microphone saying to an aide that an Israeli strike was a “hell of a pinpoint operation” is proof that the other side is trying to kill civilians, despite Netanyahu saying he has made every effort to warn Gaza residents about attacks.

“When you bombard people and kill 550 civilians and injure 3,700, this is clearly an attack that is aiming at civilians,” Barghouti said.

However, he also expressed optimism that a cease-fire will be reached by Monday night or Tuesday morning.

Netanyahu told Baier he did not want to deal with Kerry’s “off-the-cuff remarks.”

However, he said no “surgical operation” comes with the guarantee that Hamas will not fire on Israeli soldiers from civilian homes, which would force a lethal response.

“You hit them back,” Netanyahu said. “Of course some people are going to be hurt. That's totally different than deliberately targeting them.”

Netanyahu also said he worries that gruesome images could give Americans a distorted picture of the reality in Israel. However, he argued Americans can see past what he said was Hamas hiding behind civilians.

“They only see the last reel of [the] movie,” Netanyahu said. “They don't see the part that comes before where Hamas is embedding itself in civilians, hiding behind them, firing on us, hoping that … when we do attack the rocketeers and their fighters that civilian deaths will be caused because they want them to be caused.”

“They know who the good guys are,” he said.