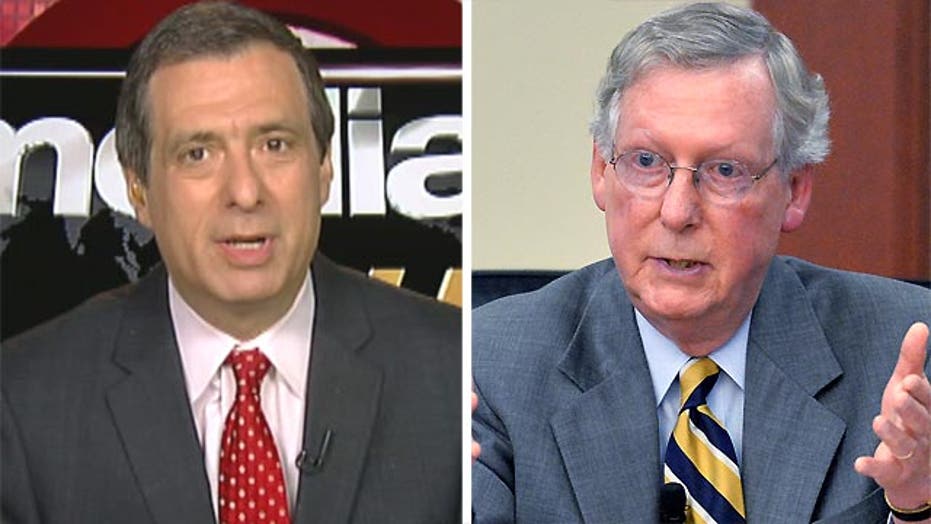 He has been captured on tape saying he wants to (gasp) roll back the Obama agenda.

And he is daring to associate with the dreaded Koch Brothers.

Now I love when politicians are recorded saying what they really think. It gives us a glimpse of how they communicate behind the focus-grouped, poll-tested rhetoric that so many of them spew. And as Mitt Romney learned with the infamous 47 percent video, such unguarded words can do real political damage.

But what the Senate minority leader says in this latest leak is, in my view, utterly unremarkable. He wants to undo the president’s policies. What exactly do voters think they’ll be getting if McConnell is reelected in Kentucky — and if the Republicans win enough seats to make him Senate majority leader?

The Democrats spent the Bush years passing all kinds of bills and amendments to undercut what the 43rd president wanted to do — there was, among other things, a constant debate about curtailing the Iraq war -- and to push their own agenda. That is what opposition parties do, employ whatever leverage they have to play defense.

What McConnell said earlier this year was leaked to the Undercurrent, a liberal YouTube channel, and reported by the Nation. He said that if Republicans win control of the Senate as well as the House:

“We can pass the spending bill, and I assure you that in the spending bill, we will be pushing back against this bureaucracy by doing what’s called placing riders in the bill: No money can be spent to do this or to do that. We’re going to go after them on healthcare, on financial services, on the Environmental Protection Agency, across the board.”

So McConnell doesn’t like ObamaCare, banking legislation or EPA rules? I’m sorry, this is not exactly a shock, not with the House having voted to repeal ObamaCare about 40 times.

Here’s the other controversial sound bite:

“And we’re not going to be debating all these gosh darn proposals. That’s all we do in the Senate is vote on things like raising the minimum wage — cost the country 500,000 new jobs; extending unemployment — that’s a great message for retirees; the student loan package the other day; that’s going to make things worse. These people believe in all the wrong things.”

Got that? McConnell says that as majority leader he’d keep measures he doesn’t believe in off the floor. What do you think Harry Reid has been doing since the Democrats won the Senate? Why do you think John Boehner hasn’t allowed a floor vote on immigration reform? That may be hardball politics, and it feels undemocratic, but it’s standard operating procedure in Washington.

Of course, none of this is as cut-and-dried as McConnell is making it sound. The Democrats could filibuster many of his moves, and no matter how well the GOP does in November, it’s virtually certain not to have a 60-vote majority to cut off debate.

If there’s something faintly embarrassing here, it’s that McConnell is sucking up to potential donors and promising them the moon — just as politicians of all stripes have done roughly forever.

But the disclosure led to such headlines as this one in the Nation:

What really gets the juices flowing on the left is that McConnell was speaking at a June event in California organized by Charles and David Koch. So were three Republican Senate candidates captured on audio: Jodi Ernst of Iowa, Tom Cotton of Arkansas and Cory Gardner of Colorado. All praised the Koch brothers, who have provided many millions of dollars to GOP candidates.

Now the industrialist brothers are certainly fair game as a political target, given their deep pockets. Conservatives often attack George Soros for his financial support of liberals and their causes. Harry Reid mentions the Kochs every chance he gets.

But I’ve always felt there was a flaw in this strategy. While political and media insiders love to argue about the Koch brothers, polls show that half the country has no idea who they are. It’s hard to imagine they will become a cutting-edge political issue.

Somehow the audiotape revived chatter that McConnell, who helped negotiate an end to the last year’s government shutdown, might use the tactic as majority leader. As the New York Times reports, “Republicans said the recordings were insignificant. Josh Holmes, a senior McConnell campaign aide, said the senator was in no way suggesting a strategy to shut down the government unless Mr. Obama capitulates.”

Hyped or not, McConnell’s Democratic opponent, Alison Lundergan Grimes, jumped on the tape story, and a failure to do so would have amounted to political malpractice. “Shockingly, Mitch McConnell will do and say anything it takes to secure his grip on personal power, including promising to hurt Kentuckians to benefit billionaires,” her campaign said.

But the Lexington Herald Leader took a decidedly ho-hum approach to the controversy:

“McConnell doesn't veer much in the recording from the same things he says on the campaign trail in Kentucky, but Democratic U.S. Senate candidate Alison Lundergan Grimes and several Democratic groups jumped on the tape late Tuesday night and early Wednesday, seeing a possible gotcha moment.”

Perhaps the story plays a little differently back home in Kentucky.