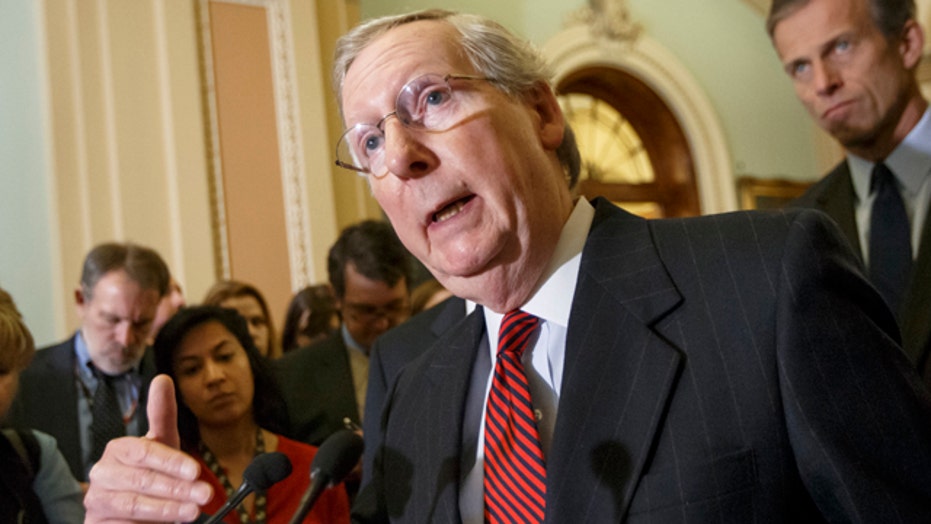 Senate Majority Leader Mitch McConnell on Tuesday offered a new plan to potentially break the impasse over legislation to fund the Department of Homeland Security -- but it remained unclear whether the plan could clear Congress before a looming funding deadline.

Democrats have long said those issues should be addressed separately. On Tuesday, McConnell agreed to that demand, and said he would split the issues into two bills.

"I've indicated to the Democratic leader that I'd be happy to have his cooperation to advance a consideration of a clean DHS bill," McConnell said, referring to legislation that would fund the department without any immigration provisions attached.

He added: "I don't know what's not to like about this."

Under McConnell's plan, the Senate would vote on a DHS funding bill, and also vote on a separate bill to unravel Obama's November immigration actions. Those executive actions would allow millions of immigrants in the country illegally to live and work in the U.S. without fear of deportation.

But Senate Democrats, asked about McConnell's new approach, signaled its success all depends on whether House Speaker John Boehner and the Republicans are on board.

"Unless Boehner is in on the deal, it won't happen," Senate Minority Leader Harry Reid, D-Nev., said.

The Democratic leaders did not say how they planned to vote on the "clean" bill, absent such a commitment from Boehner.

Boehner's office issued a statement that also avoided accepting or rejecting the proposal. "The speaker has been clear: The House has acted, and now Senate Democrats need to stop hiding. Will they continue to block funding for the Department of Homeland Security or not?" spokesman Michael Steel said.

"Congress is obliged to use every constitutional check and balance we have to rein in President Obama's lawlessness, and that includes both our confirmation authority over nominees and the power of the purse," Cruz said in the statement.

But McConnell's gambit surely boosts the chances of passage in the Senate. Earlier in the day, Democratic Sen. Joe Manchin of West Virginia told Fox News he would support both a clean funding bill and the bill to block Obama's executive actions.

The looming question indeed may be whether a clean DHS funding bill could pass the House -- where many conservatives demand that Congress use the bill as leverage to undo Obama's immigration actions.

But while most Republicans oppose the president's immigration actions, several influential members want to deal with that issue later -- or through the courts, where a state-led lawsuit has already put those actions on hold.

Rep. Peter King, R-N.Y., told Fox News that immigration and DHS funding are "two separate issues" and the approach so far has put the country "at risk."

"We have to come together and get this done by Friday," he said.

If Congress is unable to pass a bill, a partial Homeland Security shutdown would result in some 30,000 administrative and other workers getting furloughed. Some 200,000 others would fall into essential categories and stay on the job at agencies like the Border Patrol, Secret Service and Transportation Security Administration, though mostly without drawing a paycheck until the situation is resolved.