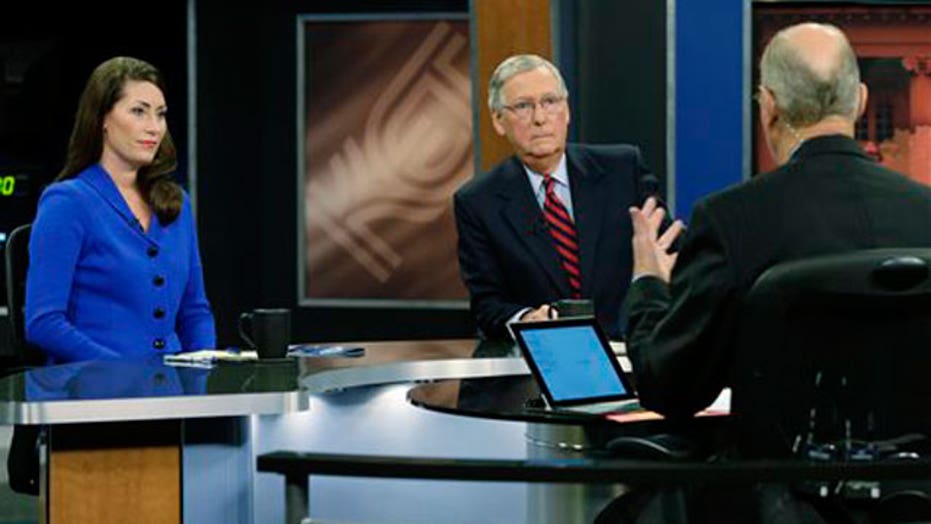 “The biggest problem we’ve got is this Obama jobs-killing agenda that my opponent supports,” McConnell said at the start of the one-hour televised debate. “And it’s particularly acute in our state with this war on coal.”

Grimes said McConnell “doesn’t want to take responsibility for all that is wrong with Washington.”

“It's due to gridlock and the partisanship he has championed,” she added. “I don’t fault Senator McConnell for becoming a multi-millionaire on the backs of hardworking Kentuckians. That’s what America’s about. But he’s gotten rich while keeping Kentuckians poor.”

She also fought back against McConnell trying to link her to Obama, as he has done throughout the campaign.

“I have my disagreements with the president,” Grimes said. “The president is not on the ballot this year.”

Grimes, who has called herself a Clinton Democrat, declined for the second time in the past few days to state whether she voted for President Obama, saying her decision is a “constitutional right for privacy at the ballot box,” not one made out of reluctance.

“I am not going to compromise a constitutional right provided here in Kentucky in order to curry favor on one or other side or for members of the media,” said Grimes, in a state where Obama’s approval rating is about 30 percent.

“There’s not a dime's worth of difference between a Clinton Democrat and an Obama Democrat,” said McConnell, who accused Grimes of trying to “deceive Kentuckians” and “hide her views.”

The closely-watched race is considered the toughest in McConnell’s 30-year Senate career and among the six or seven that will decide whether Republicans take control of the Senate.

They need to win a net total of six races to win back the upper chamber, and a McConnell loss would make their task even harder.

Both candidates said that creating jobs was at the top of their respective agendas, with Grimes assuming the role of the aggressive underdog.

“My jobs plan would grow the middle class,” she said.

McConnell tried to portray himself as an experienced, unflappable leader, even when Grimes accused him of profiting from his government job and opposing legislation to help children.

“I don’t have any idea what she’s talking about,” he said flatly.

As he has done throughout the campaign, McConnell kept his focus on coal, a vital Kentucky industry, but was also critical of other aspects of the Obama agenda including ObamaCare and the president’s economic recovery efforts.

“The administration has engaged in an assault on the coal industry,” he said. “Basically everything the president has done has been a jobs destroyer.”

He called ObamaCare “the worst piece of legislation in the last half century” and said it should be removed “root and branch.”

Democrats are enthused about the possibility of knocking off the Republicans’ top senator. And like Republicans, they have poured millions into the race, which will likely be the most expensive of the cycle.

The Democratic Senatorial Campaign Committee, for example, recently threw in $1.4 million for Grimes, on top of the half-million reportedly already spent on the race.

An averaging of polls by the nonpartisan website RealClearPolitics.com has McConnell, who survived a primary Tea Party challenge, leading by 3 percentage points.

The 72-year-old McConnell would almost certainly become the Senate majority leader if his party takes control of the upper chamber, which combined with its control of the House could potentially derail the remainder of Obama’s second term.

Grimes, Kentucky’s secretary of state, has said throughout the campaign that McConnell’s conservative leadership has denied Kentuckians jobs and health care.

Much of their campaign money is coming from interests outside of the state.

Hollywood types are eager to upset a top Capitol Hill Republican, and McConnell supporters are trying in part to stop what they consider overspending and overreaching by the Obama administration including the Environmental Protection Agency's crackdown on the coal industry.

The McConnell campaign and its allies throughout the election cycle have continuously run TV ads comparing Grimes to Obama.

Two of them -- Kentuckians for Strong Leadership and the Kentucky Opportunity Coalition -- have put down a combined $5.2 million in General Election ad time.

“You and your henchmen, the Koch brothers, have misled Kentuckians with $50 million in deceptive ads,” Grimes said.