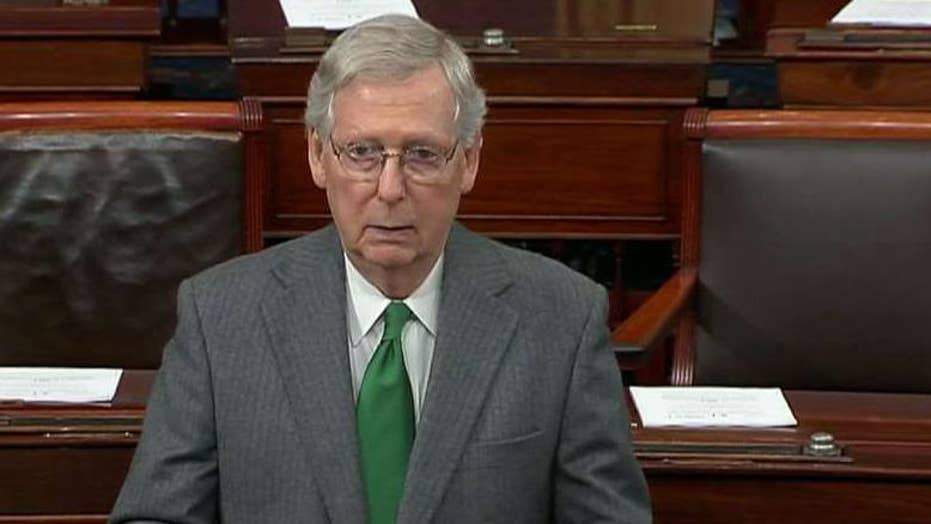 Senate Majority Leader Mitch McConnell, R-Ky., accused Democrats Tuesday of operating out of "political spite" by refusing to negotiate with President Trump on border security and threatening to block the Senate from considering any legislation until the end of the partial government shutdown.

"Maybe the Democratic Party was for secure borders before they were against them," McConnell said. "Or maybe they're just making it up as they go along. Or maybe they are dead set on opposing this particular president on any issue, for any reason, just for the sake of opposing him."

McConnell spoke on the Senate floor hours before Trump was to address the nation from the Oval Office about his long-promised border wall, which has been the key sticking point in negotiations that have gone on for close to three weeks. In his remarks, McConnell rattled off a list of prominent Democrats, including Hillary Clinton, Barack Obama, Joe Biden, and Senate Minority Leader Chuck Schumer who he said had previously backed border security legislation "with enthusiasm" in 2006.

"Today, my friend the Democratic leader [Schumer] is proposing to add a Senate shutdown to the partial federal government shutdown and block even more of the people's business, all to avoid more of what he already voted for," said McConnell, who added "The only things that have changed between then and now are the political winds and of course the occupant of the White House.

"So, this is no newfound principled objection," the majority leader said. "It's just political spite. A partisan tantrum being prioritized over the public interest."

Senate Republicans' first bill of the new Congress is a bipartisan package backed by McConnell that includes measures supporting Israel and Jordan and slapping sanctions on Syrians involved in war crimes. Democrats, led by Schumer are expected to oppose proceeding to the legislation, citing the ongoing partial shutdown. Republicans currently hold a 53-47 majority in the Senate and would need Democratic votes to advance the measure over the 60-vote threshold.

McConnell also said Tuesday that he would not bring up a pair of funding bills passed by the Democratic House of Representatives last week because President Trump will not sign them.

"We all know what is necessary to move past the funding impasse: A negotiated solution that can pass the House, earn sixty votes in the Senate, and which invests enough in border security to earn the president’s signature," McConnell said. "As I’ve stated clearly, the Senate will not waste floor time on show votes, messaging votes, or any other proposals which fail to check those boxes regarding the funding bills."